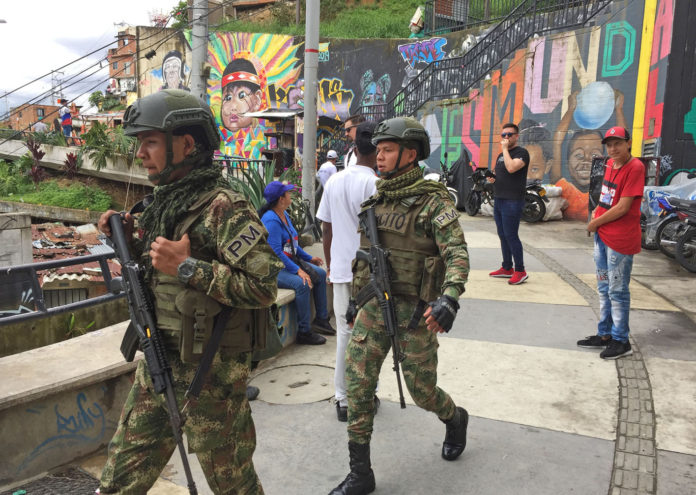 Medellín’s Comuna 13 seems like a reinvention story for the ages. Once one of the most dangerous neighborhoods in the capital of Antioquia, Comuna 13 has become one of the biggest tourist destinations in Medellín, offering daytime graffiti tours and dance performances in the streets. The neighborhood sells itself as an area transformed – but could one truly call it a “safe” place?

Even casual visitors to Comuna 13 will notice the stark difference between what they are shown and what they see in the distance. The views from the lookout points are fantastic, but there are decaying roofs and buildings just a few streets beyond the touristy areas. Even the local guides will tell visitors it’s best not to visit certain parts of the area alone, or at night.

Comuna 13, also known as San Javier, is one of the 16 Comunas, or districts, in Medellín. In the 1800s, it was known as La América and was an agricultural region. The neighborhood’s character changed in the 1960s, when the rural conflict in Antioquia sent citizens running to Medellín. Many immigrants came with nothing and gained little else from settling there; they built their houses themselves from whatever materials they could find, and were looked down upon by the longer-standing inhabitants.

As a community of the displaced and impoverished, Comuna 13 became an ideal spot for drug trafficking. The Medellín Cartel’s infamous Pablo Escobar seized the opportunity the community’s demographics gave him, putting young, out-of-work residents to use in his illegal cocaine business, both in direct operations and as hired assassins. Other drug lords, such as Hélmer Herrera, also took advantage of Comuna 13’s location and residents. In 1988, Comuna 13 was the most dangerous neighborhood in a city that averaged 380 murders per 100,000 people.

After Pablo Escobar was killed in 1993, the violence in Comuna 13 didn’t abate as drug cartels continued to wage turf wars in the barrio. In 2002, the Colombian government decided to fight violence with violence, sending a military force to take back the neighborhood from criminals with Operación Orión. Seventeen residents were killed and dozens injured. The inhabitants found it impossible to defend their territory without losing more lives and waved makeshift white flags in surrender.

In the aftermath of Operation Orión, one thing that helped rehabilitate Comuna 13 was improved transportation. A set of metal escalators was built in 2012 to make it easier to climb the hills overlooking the city. The stairs are some 28 stories in length and have roofs trimmed in orange, making them easy to spot in photographs.

Before building the escalators, Comuna 13 was relatively cut off from the rest of the city. The stairs shorten the journey by several minutes, creating a greater sense of connection between the neighborhood and the community at large.

Another important thing happened after Operation Orión: many residents poured their anger and pain into street art. The art helped save the neighborhood; Comuna 13 is now known for its garish and politicized graffiti art, and its many resident grafiteros, as well as the local-led tours that welcome visitors every day.

Even though gang-related violence has decreased since Operation Orión, some locals claim corpses of murder victims are simply hidden from view and dumped in the construction rubble of nearby La Escombrera. Comuna 13 has had some spotty safety records in the recent past. There were nearly 40 murders in 2008, and in the past two years, this hilltop shanty has undergone curfews imposed for safety reasons.

However, that doesn’t mean that no part of the area is safe to visit. Most travel blogs suggest visiting it to take in the history, but also recommend not going alone. Local guides are a safe bet, as they will know which parts of the area are the best to visit. Usually, the area around the escalators, where guards are on patrol, is safe.

“Chat with the guards and ask their opinion before exploring the area outside the escalators,” claims travel website Bizarre Globe Hopper. “Don’t take unnecessary risks.”

Much like the rest of Colombia, post-conflict Comuna 13 is a work in progress. If you choose to visit – and there are plenty of reasons to visit – make sure to respect its history and recognize how far the neighborhood has come.