I always thought Bogotá was a ludicrous place for a capital city, high in the mountains, cut-off by crumbling roads, too far from ocean trade routes, the beach and sun, and somehow such a headache to get to.

For hundreds of years it was a 40-day trip from the coast poling up the sluggish Magdalena River, and even now a hair-raising drive through the hills, that somehow, it seems perverse that someone once claimed: “Hey, let’s make this place the big apple of New Granada.”

Then came Zika. Suddenly, there is a flurry of tourists on online forums wondering how to enjoy their tropical travels without coming into contact with the mosquitoes that carry it. So it makes sense, as it did to the Spanish conquistadors, and the Muisca people who had settled the chilly highlands for generations before, to stay higher than mosquitoes.

This is because the Aedes mosquito that carries Zika (and dengue and chikungunya, two other unpleasant tropical diseases) lives comfortably to 1,700 metres, but rarely rises higher and dies out completely at 2,100 metres. So the tour advice for tropical travel in 2016 is: head for the hills!

Bogotá, at 2,400 metres, is scientifically above “the danger zones” as are many other cities and towns across Colombia. Unfortunately, the geographical smorgasbord served by Mother Nature in Colombia includes a lot of low-lying desert, jungle and savannah which must be traversed between the three mountain spines.

So for Colombians, the fact that Zika going viral is no social media joke and life is, literally and metaphorically, a series of new ups and down. But with a bit of careful planning, tourists can maybe miss the zika hotspots. Here our recommendations:

Number one destination is Vetas, in Santander, which at 3,400 metres above sea level is Colombia’s highest municipality. Any Aedes flying this high will be a knackered gnat. Mind you, most tourists will be breathless too in the thin air.

The town was founded on the bleak páramo between Bucaramanga and Pamplona back is 1551, but has yet to be discovered by Tripadvisor.

According to the town’s official website, it was first settled by gold-hungry conquistador Ambrioso Alfinger (ancestor of Goldfinger?), its crest shows a gold miner, the town flag is yellow for gold, and gold mines remain the main attraction as they have done for 400 years.

Pack your pick and shovel. It can be reached on a dirt road from Berlin, in Santander.

Next on the list, nestled on a high plain of the Volcano Alley in the southwest of the country at 3,200 metres above sea level, is the even older town of Guachucal. This was officially founded by the Spanish in 1535 but, as its name suggests, is based on a much older indigenous settlement.

Google street view hints at a typical Andean town where dogs live on the roof and townsfolk wear thick wool ruanas even on a sunny day, which suggests the chances of meeting a mosquito are close to zero.

To top it off there are stunning vistas of the snow-capped Cumbal Volcano. The town is close to several tourist sites such as the border town of Ipiales (2,900 metres) with its Sanctuary of Las Lajas, a spectacular gothic basilica built in a gorge, and the city of Pasto (2,500 metres) with its famous Black and White festival every January.

Here you can eat spit-roast guinea pigs (cuy) to upset the kids. Guachacal and Ipiales are a short bus ride from the city of Pasto.

Much further north, in the lush hills of Antioquia, lies Yarumal, at 2,265 metres, a traditional farming town on the main road from Medellín to Cartagena famous for its Stations of the Cross on a steep path behind the town and very high incidence of early-onset dementia (the town is a crucible for Alzheimer research).

I have an indelible memory of watching Oliver Stone’s hyper-violent Natural Born Killers in the local movie house when passing through back in the 1990s. Each gratuitous act of gore was greeted with whoops of delight by an audience of aguardiente-swilling farmers, all armed with machetes on their belts, adding extra frisson to the show.

The terrain north of Yarumal quickly plunges back to the coastal lowlands where dengue, Zika and Chikungunya hold sway.

Perhaps Colombia’s most uninterrupted highland is the swathe of Andes north of Bogotá, running through the departments of Cundinamarca and Boyacá. Here, there is plenty to enjoy sans moustique from popular day trips such as the salt cathedral at Zipaquira (2,650 metre) or Lake Guativata (3,000 metres), the mysterious source of the El Dorado legends.

But head further north and the Andes widen to a wealth of historical colonial towns such as the stunning Villa de Leyva, which has been a weekend retreat for wealthy families from Bogotá for over four centuries and where at 2,140 metres you can warm up without succumbing to “break-bone fever” (as they called dengue in colonial times).

The town is a must for all travelers to Colombia and has plenty of activities such as fossil-hunting and horse-riding in the nearby hills.

Heading north and sticking to the highlands you enter perhaps one of the country’s best-kept tourism secrets, the Boyacá Circuit, well-known to Colombian travellers, high enough to be Zika-free, but not so high on the tick-list of international visitors.

Which is a shame since the area has dozens of hospitable towns with boutique hotels and wholesome restaurants stuffed with antiques and attitude. In an eatery in Tibasosa (2,500 metres) I laughed at a sign saying “We do not have WiFi. Talk among yourselves.”

Close by is Paipa, a spa town with posh hotels built over hot springs, and Monguí (2,900 metres) often described as the prettiest town in Colombia, and Tota Lake, which at over 3,000 metres and 55 square kilometres has the aspect of a Scottish loch and even its own monster, described by the locals as a “devil-whale” — but definitely no Zika mosquitoes.

Most visitors to the lake enjoy the views and relax by a wood fire in a local restaurant eating rainbow trout. But those daring enough to brave the devil-whale and the cold waters — 13 degrees — can swim from gleaming white beaches at Playa Blanca, on the lake’s southern shore.

Or of course you can throw caution to the wind and head off to that other Playa Blanca — the hot one near Cartagena only 1 metre above sea level. Bring a hammock, a bottle of rum, and larger bottle of insect repellent.

The great thing about Colombia as a tourist is you can chill or be chilled. You have choice. 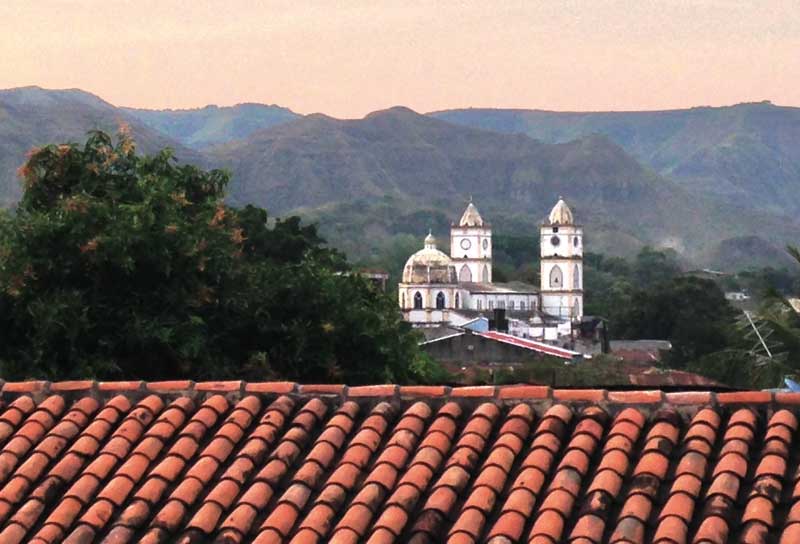