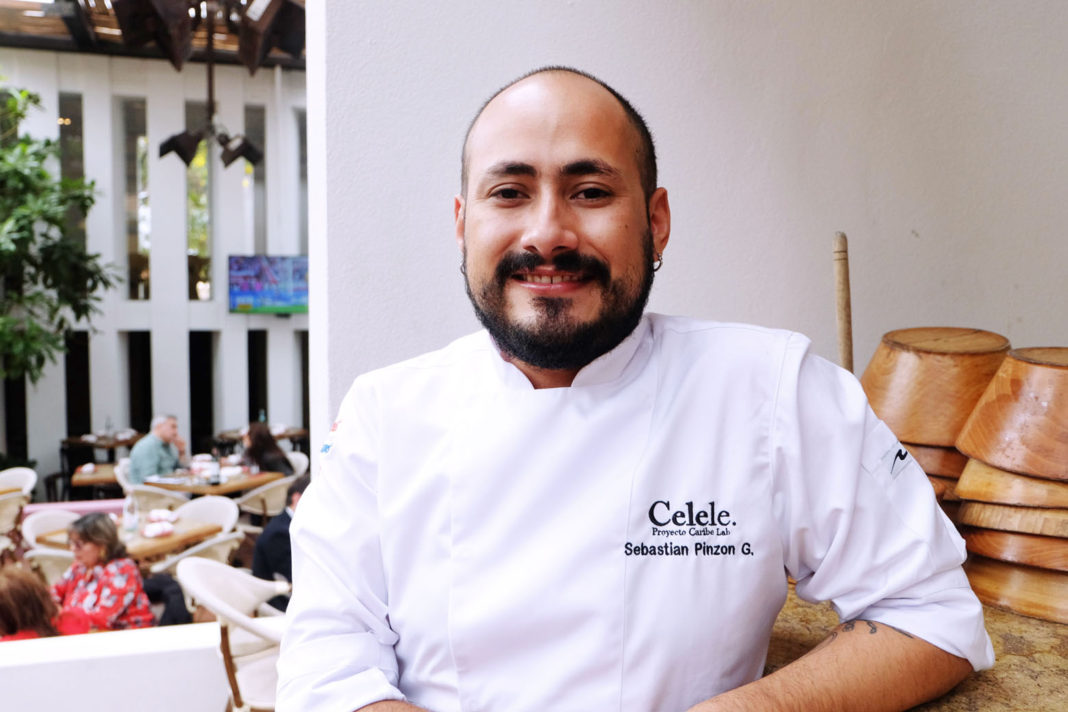 Sebastián Pinzón has made the regional finals of San Pellegrino’s Young Chef contest.
Having faced the jurors in Lima, Peru, last week, the chef of Cartagena’s Celele spoke about his gastronomic narrative.

The City Paper (TCP): Did being named regional finalist of S.P’s Young Chef award catch you by surprise?

Sebastián Pinzón (SP): Yes, I was surprised at first because Alma, the International School of Italian Cuisine, is in charge of the food selection. I had my dish very clear and the inspiration behind it. It was also very coherent with the philosophy of my professional project Proyecto Caribe Lab and what we do every day inside and outside our kitchen at Celele.

TCP: What is the philosophy behind Proyecto Caribe Lab?

SP: At Proyecto Caribe Lab we have been going for three years and our aim is to make visible – and promote – dishes from Colombia’s Caribbean coast. Because I am not a costeño – I was born in Tolima – everything fascinates me, and I find myself traveling frequently to Barranquilla, Santa Marta and into the Sierra Nevada. The coastal food basket is so different from what many imagine and very removed from the Andes and Pacific coast. At Proyecto Caribe Lab we started looking at cooking techniques, ancestral recipes, endemic ingredients. The mission is one of constant rediscovery.

The global trend in restaurants is to promote sustainable practices because cooks generate a lot of refuse that ends up harming the environment. It’s not just about buying local, but being environmentally friendly. We really don’t need to use imported goods in our kitchens. At Proyecto Caribe Lab we connect with farming communities, NGOs and other social entities when doing our research. The women cooks of Palenque, as one example, are an important reference for us, because of their handed-down traditions.

TCP: So Proyecto Caribe Lab is about safeguarding culinary traditions, not changing them.

SP: When you understand where food originates from, you can begin to change it. This is part of the new coastal culinary wave. At Celele we are a Contemporary Caribbean restaurant. What we do at Proyecto Caribe Lab is materialize dishes for our customers. From the days when we began doing degustation menus in Pop-ups and cooking for friends in “secret” locations, chef Jaime Rodríguez and I realized that we needed a professional cooking venue. Celele is the first child of Proyecto Caribe Lab.

TCP: Tell us about the plate you are going to present at the SPYC regional finals this month.

SP: The dish wasn’t created for the S.P contest. It is the end result of a Pop-up cooking exercise that evolved over time. Its essence, however, remains: green mango, sour guayaba, and Jurel fish. Cooking is about constant evolution and there’s no such thing as a perfect plate. As a chef, one must always improve. Being self-critical is another important ingredient in a kitchen.

TCP: Your dishes pair textures and colors. There’s alchemy in the preparation. Is this one of your culinary signatures?

SP: I attempt with my food to create a sensory experience. My plates have to have different textures, from crunchy to smooth and aromatic. Cooking is a game of the senses. That’s the reaction people get when they eat a mango spaghetti or drink a cold guayaba broth.

SP: I am inspired by the traditional, as well as by popular foods from a coctél de camarón to an arepa de huevo. A plate can have a bit of everything. What you don’t want as a chef is for people to get bored. Boredom ranks among the worst things that can happen to clients.

TCP: How did you end up in Cartagena?

SP: After two years as the chef-parter of the Bogotá restaurant Salvo Patria, I left for San Francisco and fell in love with the dynamics of living by the sea. I then moved to Lima and felt the same. Cartagena meets all my expectations when it comes to lifestyle and being connected to seafood.

SP: Unfortunately in Colombia we don’t value the seafood-value chain. Even though we share the same ocean as Ecuador and Peru, our markets are limited in their offering and don’t make visible to consumers many varieties. The food basket here remains very artisanal in part because of precarious infrastructure. The tragedy is that we are also over-exploiting our oceans. One can’t force nature.

TCP: Cartagena relies heavily on local markets for food. Is the “market” culture an integral part of the Celele dining experience?

SP: At Celele we go three or four times a week to the market. I buy only what I know we consume. The menu changes because of the availability of certain ingredients. This is why we have limited the restaurant’s menu to only four entrees and five mains. We also offer a “house special” every day. The objective is to act sustainably, make connections and empower through knowledge. The San Pellegrino prize is a great opportunity to motivate others.

El Portico for lunch in the countryside