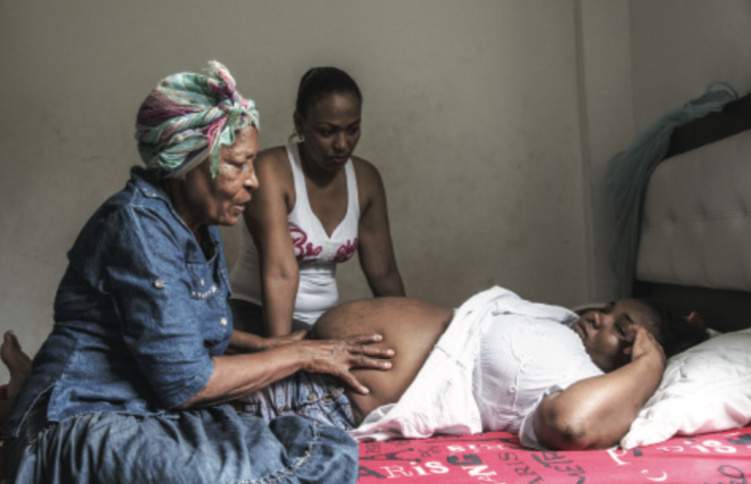 They are not our biological mothers, but in many societies, a midwife is the first person who lays eyes on us, before delivering us into the waiting arms of our parents. Walking around the Museo del Oro’s latest temporary exhibition titled Partería: saber ancestral y práctica viva (Midwifery: ancient wisdom and current practice), I cast my mind back to the bones of the provincial English hospital where I took my own first breath. Certain that a midwife would have been present, my memory of her identity is as empty as the field where the demolished hospital now stands. Nothing, as I scoured recollections of stories or anecdotes told by my family of my birth produced a remembrance of discussing a midwife, let alone knowing details of her personal life. It was with this reflection on the role of midwives in British society that I wondered how different the story of my birth would have been had I entered this world on Colombia’s Pacific Coast.

As the opening title states, the exhibition brings to life The Pacific in a Birth. From the lushness of the tropical teal adorning the walls interspersed with refreshing nature prints in playful palettes, to audio of local rhythms collaborating to bring to life the sounds and sensations of the region, the exhibition introduces the viewer to the ancient wisdom and current practise of Afro midwifery, where the role of ‘midwife’ is a sacred status deeply integrated into the life-long experiences of a community.

In a series of hollow wooden frames centering the exhibition space, the purpose and process of the Afro midwife is explored through carefully arranged text (including definitions of midwifery terms), tools of the trade, images, audio-visual material and perhaps, most exquisite of all, glass-plated dried plants and herbs that make up the Afro midwives’ essential medicine cabinet. Central to the storytelling is the Afro midwives’ bounty of ancestral knowledge and the endearing role they exercise in the lives of the children they have delivered, their families, and community-at-large.

Presented as a duality of the natural world, the Afro midwives’ knowledge is also one of life long healing, hence the bountiful herb gardens, traditionally grown in old canoes perched above damp earth. The role of the midwife as a representative of the spirit world is also expressed through the holistic with nutritional instructions for pre and post-natal health. Colombia’s midwives have been fundamental in preventing mortality among women in childbirth. According to a 2018 United Nations report on Maternal mortality in developing countries, every day, approximately 830 women die from preventable causes related to pregnancy and childbirth.

Alongside examples of birthing practices, the exhibition includes footage of an Afro midwife applying the length of her fingers to a woman’s swollen belly to determine a baby’s developmental stage. Of equal importance is the humanistic birth of Afro-midwives’ training encourages. From traditions that “place value on the emotional world,” the Partería explains how Afro midwives sing, pray, and as some images show, embrace, massage and hold mothers in the process of labor, all contributing to “the ancient techniques for treating childbirths as rituals of love and humanity.” This emotional connection combined with the Afro-midwives’ specialized knowledge of medicine propels their status in the Pacific region beyond the fleeting, clinical interactions of their Western counterparts, and responsible for the life-long health of vulnerable communities.

Featuring a complimentary introduction to pre and post-Hispanic symbology on its outer walls, alongside contemplation on Afro-Colombian identity, the exhibition is a comprehensive look at a living tradition that continues to influence modern childbirth today.

During the year when the Museo del Oro celebrates 80 years of existence, a museum ranked among the very best in world for its invaluable collection of pre-Columbian gold, Partería: saber ancestral y práctica viva is also an honest tribute to a practice proclaimed in 2016 by the Ministry of Culture as Intangible Cultural Heritage of the nation. Currently, some 1,600 traditional parteras work in remote communities along Colombia’s Pacific coast.

The multi-disciplinary show coincides with the inauguration last year of the Banco de la República’s Cultural Center in Buenaventura, an entity that believes socially inclusive exhibitions such as this one, contribute to “a greater understanding of Afro-Colombian rituals fundamental to the identity of present and future generations.”