Driving from Bogotá to rural Antioquia I am complaining most of the way about the poor state of Colombian roads or high road tolls. The next day, though, looking over the rugged green hills around Guatape, my father-in-law puts things in perspective as he recounts his childhood on a remote farm. He waves his hand towards some distant mist-shrouded mountain ridges. The farm was the other side. Once a week, usually on Sundays, he had to lead mules over slippery trails to the local town. That meant church and the market, and, he chuckles, as he got older there were beers and girls. But still, the hours-long trek in the rain back home at the end of the day.

I guess this is his polite way to shut me up about our “arduous 8-hour car ride from Bogotá,” but it also has me thinking about the town in question, Guatapé in southwest Antioquia. In the rich tapestry of Colombian geography and culture the town stands out as a prime specimen of proud Paisa culture, both as a market town for the farms and fincas that dot the lush hillsides, but also as a hub of historic mule trails that once stitched together the precarious commerce of a young Spanish colony struggling with the tyranny of distance.

In fact moaning about the transport infrastructure seems to be common from the early days.  In the 1700s a European travellers commented that Antioquia, with its rugged terrain, was the region “most outstanding in terms of difficult communication” and that poor tracks (or lack of them) was the cause of “slowness of trade and the considerable losses suffered by traders in their transport,” a theme that today’s transport operators.

Most of the mules and horses in Guatapé today carry visitors on treks or for a short ride along the lakeside malecón that forms themain axis of the town’s booming tourist trade. For good reason, many Colombian – and increasingly overseas – tourists flock here to enjoy the beautiful  Guatapé dam lake topped by the El Peñol, a mysterious basalt rock, not unlike Rio’s Sugar Loaf, where you can climb 650 steps to what the rock owners (with only slight hyperbole) call the “Best View in the World.” The area has a dizzy list of adventure and outdoor pursuits, riding, trout fishing, hiking, boating and some trendy restaurants. On my last visit I ate a world-class fish biryani cooked up by Sam (of ‘Donde Sam’) an Indian who arrived in the town via Bahrein, New York and Mexico.

The influx is mostly city-slickers from Medellín which is barely an hour’s drive away, traffic jams permitting, and weekends and festivos can be hectic and prices higher than in other towns. Most weekends, a lakeside party kicks off with beers and cocktails, fried snacks, impromptu dancing and a thrilling zip line over the waterfront.  But just two blocks away the old folk still sit and sip their tintos with a shot of aguardiente and talk pig prices.  That’s the real beauty of Guatape: the mix of rural and cosmopolitan Colombia.

This merge of old and new is captured in another feature for which the town is famous, the zocalos, decorative motifs carved on the plinth of nearly every house or building in the town reflecting a wide slice of local life, such as a bull for the butchers or a plane for a travel agency. A local DJ has a mix deck, and there are trucks, motorbikes, bar scenes and parents pushing baby buggies. Some recount the conflict, such as displaced families lugging their worldly goods through the hills, and others are merely geometric designs.

Most though feature rural scenes, which brings us back to the arrieros, the hardy peasants that drove the pack animals for weeks along the  Camino de Islitas, a route linking the Magdalena River with the growing communities around Medellín.  The Camino had been used by the Spanish settlers in various forms for 400 years, but was based on even more ancient trade routes used by the indigenous people to barter food, gold and other precious metals.

For early Europeans, the journey over the Andes to Medellín was a daunting trek from the jungle town of Nare on the Magdalena and too tough in fact even for mules. Cargo and people were hauled up the rapids of the Rio Nare in small rafts, then carried on the backs of porters, called cargueros, for up to 20 days. Somepaths were so steep “one has to pull up on the roots and branches of trees” Carl Gosselman wrote in 1826.  The Swiss adventurer clearly felt embarrassed being carried on the back of a carguero, but recommended “not to sympathise with them or you might end up walking yourself or hiring more to spread the load, which could be expensive.

Not surprisingly in the 1830s the colonists started to develop new mule tracks that would join Nare with the interior of Antioquia, though this innovation was initially blocked by the cargueros who probably had few other employment options than to lug people and things over mountains.

But change did come in the form of a new shorter route that carved its way from Islitas on the Rio Nare to Ríonegro and Medellín, as a fifteen day trip with mules or oxen but still full of hardships: “plague, heat, thirst, and snakes” as one arreiro is on record in the 1840s. He added: “My father would cry when he heard he had take cargo down to Islitas.”

Things generally got better as coffee, cacao and gold went down the hill and a variety of imported goods went up it to fill the needs of ever-expanding Medellín, and soon communities along the Camino de Islitas thrived, towns that we know today asEl Peñol, Guatapé, San Carlos and Canoas.  Eventually the railroads put paid to the long-distance mule tracks in the early 1900s, though mules were still needed to bring goods to and from remoter farms to transport hubs; and photos from the 1950s show Guatape’s streets lined with mule trains.

Mules are still used in remoter parts of Antioquia and in smaller towns, and you might well see pack animals plodding up an incline. But the golden era has passed and now in Guatapé you are more like to see Tri-motos struggling up hill loaded with backpackers and their rucksacks.

On the drive home to Bogotá my eyes soak in the endless horizons of dense foliage draped over steep hills with the rushing jungle rivers below. I think of the cargueros and the arrieros struggling over this daunting terrain and, as we reach our first road toll (COP 9,000 pesos for 50 kms), remember that the mule trains were paying “mule track tolls” back in 1869.  I make it back to Bogotá without complaining once.

TIPS: There is frequent bus service to Guatapé from Medellín’s Bus Terminus (Norte) and the two hour trip costs COP$13,000. If wanting to stay within walking distance to the stone monolith La Piedra Peñol and enjoy the 360-degree views, there are plenty of small, upscale hotels, such as Hotel Portobello, El Encuentro (run by a Californian named Greg) and the hostel Mi Casa Guatape. 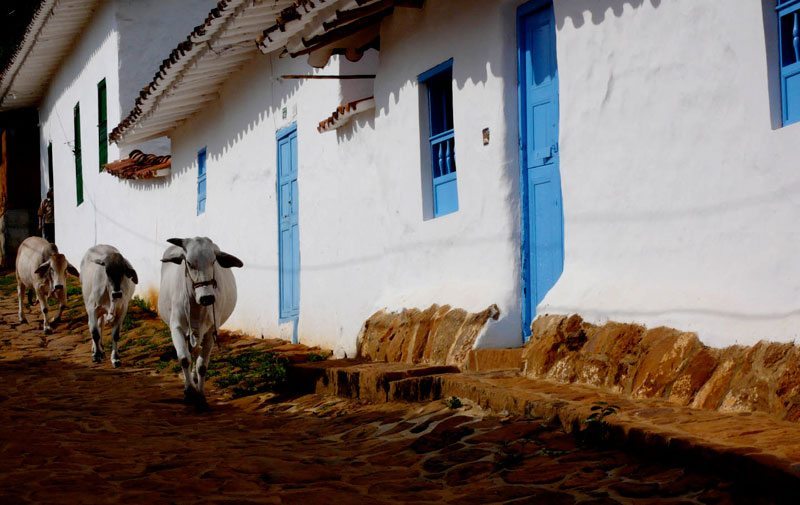