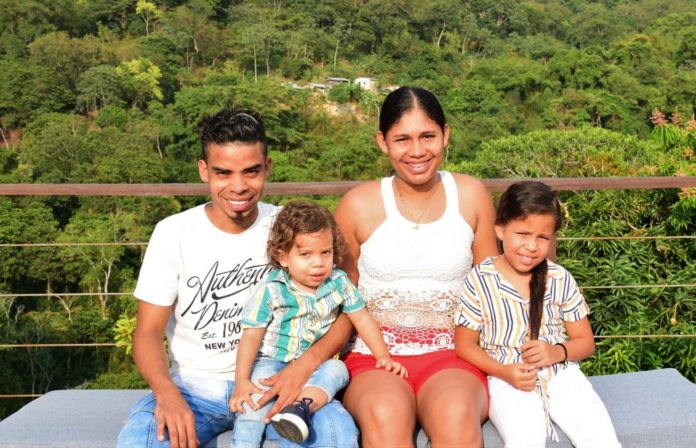 For 26-year old Yeiner, chef at the small boutique hostel Siembra in the tourist outpost of Minca, the national lockdown as a result of coronavirus forced the business to shutter its doors just five months after it opened. For Yeiner, husband to Sara, and father of four children, all residents of Minca, cooking for guests was the only way for him to support his immediate family and at one of few hostels in the Sierra Nevada de Santa Marta that managed to keep a few paying guests who chose not to return to their countries of origin when the lockdown began.

Relocated to Minca under the government’s land restitution program “Restitución de Tierras,” Yeiner grew up in an even more remote community in the Sierra, the township of Montecristo, when at age of seven and during the height of the internal conflict paramilitaries belonging to the Auto Defensas Unidad de Colombia (AUC), displaced his family from the farm and lands they owned, and first major crisis Yeiner and 15 family members endured. Now, they are facing their second.

Leaving the rest of his family, including two of his eldest children, to live in Minca, and not knowing when he can return to Montecristo was not an easy decision for Yeiner to make, but ultimately, he and his family felt it was the best thing to do.

Montecristo is what is known in Colombia as “Estrato 1” (economic level one), a classification the Colombian government gives each neighborhood to show which economic bracket it falls into. (1 being the poorest, and 6 being the most affluent). Now, in Montecristo, and all over the surrounding area of Minca, you can see red flags hanging outside houses, a plea for food and water from the poorest families – Estrato 1. Being unable to leave their houses to work on a day-to day-basis or feed their families.

To help bring aid to some of these families on April 16 some local business owners and community leaders in Minca began a crowd-funding campaign; The Minca Covid Relief Effort, which has already received donations of almost COP$25 million, but there is still a long way to go to reach their target of around COP$400 million, which would guarantee food to the entire town for the next three months.

The crowdfunding page was created to generate funds to purchase and deliver urgently needed food and supplies to places such as Montecristo, as well as some of the other worst affected areas in and around Minca, such as Campano, a small and isolated community, located further up the mountain in the Sierra Nevada, and Casino (one of the poorest neighborhoods in the town of Minca). Additionally, another community aid initiative called “Rincon De Toño y sus vecinos” is currently helping distribute food in Minca, with hundreds of people lining up on the streets to receive help, being sprayed from head to toe with a mix of alcohol, water and chlorine before receiving a day’s rations.

The situation in the Sierra Nevada is dire and it’s going to be a tough battle to keep supplying food and other essentials to people for an indefinite period, whilst at the same time trying to prevent the spread of COVID-19. Colombian President Ivan Duque has remarked of potentially maintaining social distancing rules for another 18 months and if coronavirus cases defy a “flattening of the curve,” even harsher quarantines could be enforced.

“What scares me most is the economic impact, as we all know, we all depend on the economy, if the economy is not moving, then no one is moving… without our economy, many families will not have their daily income, or roofs over their heads, or daily food, (which) at the moment is not the case,” said Yeiner.

“We depend on everything day-to-day and need businesses such as hostels to be open to bring in income. Of an estimated 35 families in Montecristo, two members of each household work in hostels to support their families,” he adds.

Before the first case of coronavirus in Colombia on March 6, Minca was a thriving destination for hikers, birders and backpackers.  The majority of businesses are tourism-focused and the majority of the town’s residents depend on nationals and foreigners supporting ecolodges, restaurants, and guides. Without tourists, there’s no work, and for this town of 800, having families in abject poverty has become an all-too-real scenario.

Asked if he could send a personal message to president Duque, Yeiner replies: “I would tell him to put his hand on his heart and think a little bit more about lower-income families, like us, from Estratos 1,2 & 3. We are the most in need.”

To donate and support families in Minca such as Yeiner’s, please visit; https://www.gofundme.com/f/minca-covid-relief-effort