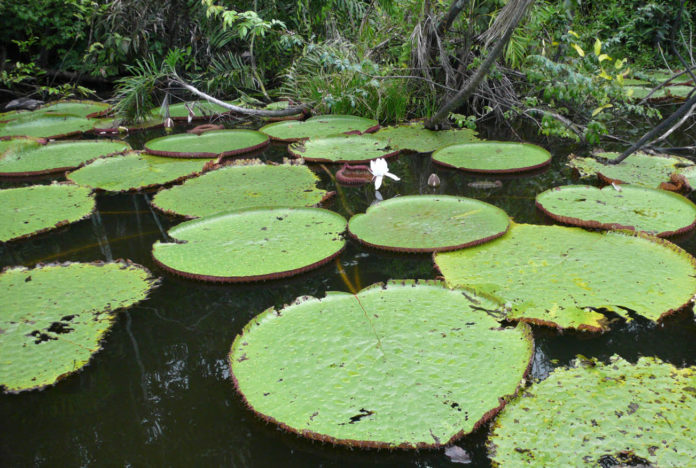 Visitors to Puerto Nariño are always in awe of the town’s manicured lawns, white picket fence gardens and open market where the three main indigenous groups of the region, the Ticuna, Yagua and Cocama, come to trade. Nestled on the banks of the Amazon River, Puerto Nariño is the gateway to another magical place, the Tarapoto lakes, home to pink river dolphins, caimans, macaws, squirrel monkeys and a pre-historic river fish called pirarucú.

The Tarapoto’s network of inter-connected waterways is one of the most conserved habitats in the Colombian Amazon. However, the encroachment of tourism offering dolphin spotting and piranha fishing from motorized boats is threatening the biodiversity of this 400-square kilometer area of dense rainforest and lakes.

Scientists conducting research in the 45 lakes of the Tarapoto have identified 900 plants; 300 birds, 176 fish; 56 reptiles, 46 mammals and 30 amphibians. Among some of the endangered species to inhabit these wetlands are black alligators, jaguars, dolphins, manatees and otters.

Signed in Ramsar (Iran) in 1971, the Convention on Wetlands of International Importance works to protect threatened ecosystems around the world. Ramsar sites are guaranteed maximum international protection of their lakes, rivers, swamps and mangroves.

On January 15, the Ramsar Convention listed Tarapoto among its protected wetlands, and ninth designation for a rare national ecosystem. It is the first time an area of the Colombian Amazon has been recognized for its aquatic biodiversity. Other Ramsar sites in Colombia include the Otún lagoons; Estrella wetlands of the Iniridia River (Guainía); Baudó River delta; La Cocha Lake; Magdalena River delta and estuaries of the Ciénaga Grande de Santa Marta; Chingaza wetlands, among others.

President Juan Manuel Santos visited Puerto Nariño, Thursday, to present the Ramsar declaration to the Colombian people and remarked: “This is a magical place […] with very special characteristics.” The President also recognized the hard work of the indigenous groups to have Tarapoto protected by an intergovernmental agreement. “No one can come to destroy these riches. It has a guarantee, an international seal,” said Santos.

With Tarapoto listed as a Ramsar site, Colombia is reaching close to a million hectares of protected wetlands. “Our indigenous peoples are the best protectors of that great wealth that Colombia has, the environment, mother earth, our water,” reaffirmed Santos.