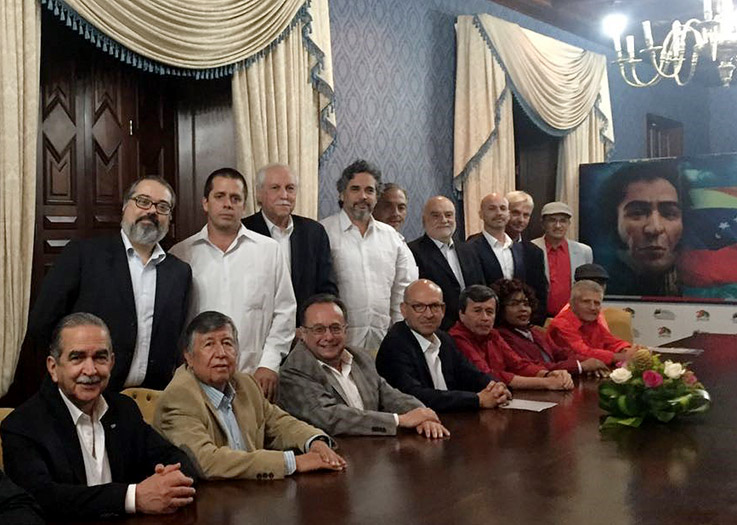 On Monday, after a historic meeting in Caracas, Venezuela, representatives of the Colombian government and National Liberation Army (ELN) guerrilla announced that they will begin install the peace negotiation table October 27 in Quito, Ecuador, and begin formal talks November 3.

This launch of what is being called the “public phase” marks a return to talks with the nation’s second-largest leftist insurgency that had been occurring for around two years through back channels. Discussions stalled earlier this year, however, shortly after President Juan Manuel Santos confirmed they were underway.

In an “act of good will” ELN released Monday another kidnapped hostage to the International Committee of the Red Cross. This hand-over marks a third prisoner release in the two weeks, and least two other hostages, including former congress member Odin Sánchez, remain in captivity.

In a national address following the announcement, President Juan Manuel Santos said he will finalize and announce the team of negotiators who will head to Quito within the next few days. Brazil, Cuba, Chile, Norway, and Venezuela will serve as guarantor nations throughout the process.

The government cut off discussions six months ago with the insurgency and concerns were mounting that the two sides would have difficulty re-engaging after ELN’s high-profile kidnapping of Spanish journalist Salud Hernández-Mora in May. But now, despite the current political crisis stemming from the rejected peace agreement with the Revolutionary Armed Forces of Colombia (FARC), nullified by voters in the October 2 plebiscite, President Santos is bringing ELN back into the fold in search of what he called a “total peace.”

The president added that the plebiscite result that struck down the Final Accord his administration spent four years crafting has not shaken his will to finalize peace with FARC – but recognizes that the window to end all conflict in Colombia is not indefinite. “We are aware that we must act promptly — with speed — because the greatest enemy we have now is time,” said President Santos.

The announcement of the ELN talks came the same day that former President Álvaro Uribe Vélez, and other key figures of the “No” campaign, clarified demands for a new peace agreement. Uribe says leaders of the guerrilla group must serve at least five years in prison and cannot be allowed to run for elected office once FARC demobilizes as a military insurgency and forms a political party.

This is a significant departure from the previous justice provisions. The former accord would have allowed combatants who fully cooperated with the legal process and admitted their crimes to only face eight years of limitations on their freedom. That would not have consisted of a typical sentence in jail, but instead restricted them to detention in 28 designated demobilization zones monitored by the United Nations.

The limitations on political participation may also cause friction. Throughout the final year of the peace negotiations, FARC leader Rodrigo Londoño, alias “Timochenko,” boasted to his rank-and-file combatants that their ideological struggle would continue “with words” instead of weapons. The rejected deal would have guaranteed the group 10 non-voting seats in the legislature until the 2018 national elections. President Santos, during the accord-signing ceremony in Cartagena, September 26, highlighted the importance of that stipulation saying – “Welcome to the democracy.”

With Uribe an influential and vocal senator, his input is key to salvaging the FARC accord. If Santos’ negotiators can convince the guerrilla’s negotiators in Havana to appease to Uribe’s adjustments, a prevailing view is that the vast majority of Colombians will then support a new agreement.

It remains unclear, however, whether FARC will accept new terms as laid-out by Uribe. Moreover, if FARC’s leadership signs any agreement that includes real prison terms and lesser political participation, many believe a large number of guerrillas will opt not to demobilize. Some have already revealed their intention to remain in the jungle, and others are expected to continue their drug trafficking, extortion, or illegal mining rackets rather than handing over their arms.

Regardless, by bringing ELN to the table at the same time he is trying to salvage peace with FARC, the recent Nobel Peace Prize-winning president has further illustrated his commitment to ending two conflicts that seemed intractable in the recent past.

Like FARC, the ELN rebels have been battling the government for more than 50 years. But the smaller of the two groups has seen its strength deplete even further in recent years and lacks the nationwide network of the larger Marxist organization. It retains its largest presence near the borders of Venezuela (in the departments of Arauca and Norte de Santander) and Ecuador (in Nariño and surrounding areas).

In addition to the ongoing kidnapping and other illicit activities, there are reports that ELN has been expanding its reach since FARC and the government sealed the bilateral ceasefire. And it continues to show its ability to disrupt operations in the oil sector. The group has been blamed for several attacks this year on the nation’s major Caño-Limon pipeline, halting pumping by Occidental Petroleum for more than a month this summer and disrupting Ecopetrol’s operations this spring.

Even before the FARC accord was rejected at the ballot, many feared that the agreement’s immediate effect on improving security in the country would be limited unless the government could also get ELN to agree to peace.

So if Santos can get both guerrilla groups to lay down their weapons in quick succession, he will live up to the challenge the Norwegian Nobel Committee set forth when awarding him its highest honor.

“We must achieve peace,” said President Santos, “and do it now.”