Jimmy Andres Monroy Cerquera gives a huge smile as he catches the brightly-coloured baton for the last time and waves cheekily to the crowd. His routine might last just 40 seconds, but it will earn him $1,000 pesos – assuming he can collect his tips before the lights change and he loses his audience forever.

The 22-year-old, with his lively brown eyes and dreadlocks tucked neatly into a red bandana, is one of a proud bunch of performers and tradesmen who earn their living at Bogota’s busiest red lights. This wildly disparate group, which heaps fire eaters, jugglers and acrobats alongside windscreen cleaners, florists and DVD salesmen, was the inspiration for La Sociedad del Semaforo, a 2010 Colombian film. The story follows a roguish but loveable band of artists and chancers, who work their magic at one of the city’s busiest junctions.

It is certainly an interesting tale, but even if the film’s producers pride themselves on their realism, many real-life performers certainly refused to buy a ticket.  “No way,” says Jimmy, carefully placing his batons on the pavement as he waits patiently for the lights to turn red again.

“The film makes people like us look bad and I don’t want that. They are talking about drugs and violence and we don’t want to be stigmatized. “What we do is art. It has nothing to do with violence.”

Jimmy has performed at a busy corner in Bogotá’s north three months now, practicing a difficult Russian juggling trick called Devil Sticks. A friend taught him the skill in a fortnight. One week later Jimmy was working the traffic lights when an impressed driver handed him a folded $20,000 peso tip.

Now he works six hours a day, three days a week, while living with his family in Chapinero Alto and finishing his education. He hopes to obtain an apprenticeship.

“I do this because it is an economic help. It’s not my life, but I love it,” he smiles. “Often people have nothing to give but they still say something good about what I do. Not everyone approves of this work, but people rarely criticize.”

He believes the performers bring art to people who would otherwise sit bored in their cars. “Even if I’m in a park and I’m just practicing, people say something positive to me or they ask me for lessons,” he grins. “What I do is art and art should be shared.”

Jimmy makes around $40,000 pesos a day but insists this is modest compared to other, more ostentatious, performers who can earn up to $150,000. Those artists are often reluctant to talk about their earnings, he says, but they still share the secrets of their skills with others. The street performers also follow a strict code of conduct. The first artist who arrives at a junction ‘owns’ it and has the right to decide who performs there. The only exception is when a performer uses one set of lights consistently. He becomes the ‘permanent owner’.

Jonny Sanchez Velasquez has worked Bogota’s traffic lights for five years, juggling knives and fire and mastering the art of balancing a bicycle on his forehead. The 25-year-old sees his trade as a permanent career. “I started practicing in the park one day and then I looked at the traffic light performers and realized it was a really good way to make money,” he said. “I work five hours a day, every day. I can earn $60,000 pesos on a good day and $20,000 on a bad one. Once a driver handed me a $50,000 peso note.”

Jonny insists he is happy because he is “doing what he loves”. “There are some people who don’t understand our art, but the majority of people are good to us,” he confides, “My family really support what I do.”

Inconveniently for the performers, Bogota’s traffic lights all run on different timers. That means there is a skill to calculating exactly when each light will turn green. Jimmy leaves himself just enough time to scamper between the cars for his wages. “I don’t own a traffic light just yet,” he grins as he counts the coins in his palm. “But I’m working on it.” 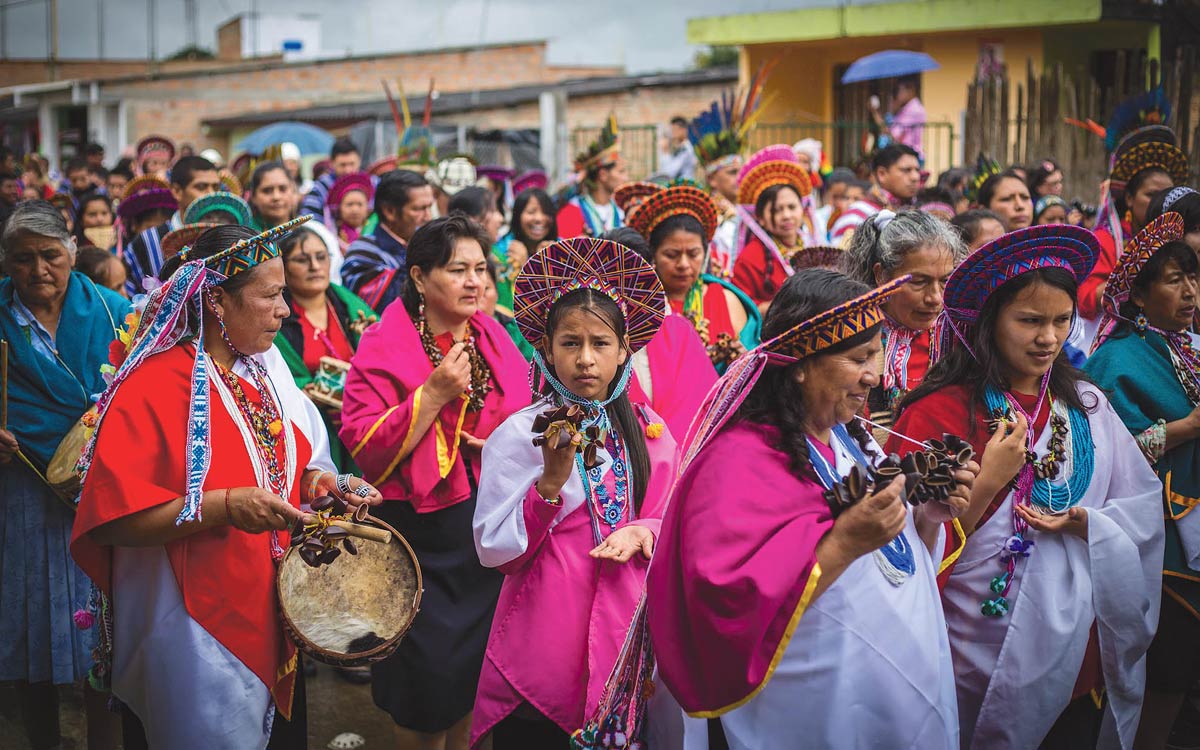