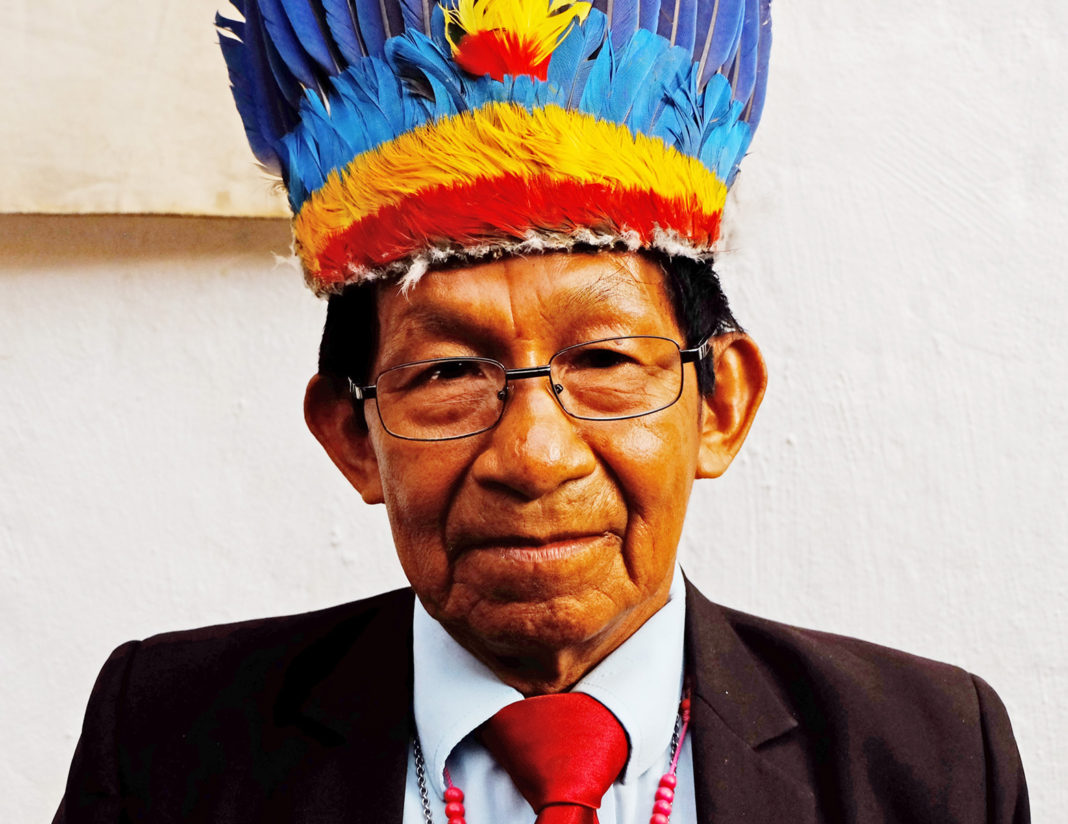 The Colombian Constitution of 1991 marked a turning point in the nation’s history by introducing article 246, which guaranteed rights and freedoms to indigenous groups, including the recognition of language, cultural expressions, and self-determination within ancestral territories.

Three years before the Constitution became law, President Virgilio Barco (1921-1997) travelled to the remote jungle outpost of La Chorrera, on the eastern-most limit of the Colombian Amazon with Brazil, to officiate the hand-over of 6 million hectares of land to leaders of the Huitoto, an indigenous tribe that faced extermination during much of the 19th century at the hands of the infamous Peruvian rubber company Casa Arana.

Of the 300,000 Huitoto known to have resided during the Peruvian occupation of the so-called Trapecio Amazónico, an area that encompasses two of Colombia’s most majestic rivers – Río Putumayo and Río Caquetá – only 7,000 survive today. When President Barco delivered an impassioned “We are all Colombia” speech before assembled tribal leaders, dressed in feathered headdress and loincloths, he remarked that the territorial protection of the newly established Predio-Putumayo, “by no means undermines the rights of indigenous populations to enjoy the benefits of modern society.” Attending a ceremony that marked the historic demarcation of a territory, which together with national park land now totals some 12 million hectares, was the 50-year old Huitoto leader Reynaldo Giagrecudo.

During the next three decades, beginning with the announcement from the Liberal president in La Chorrera, where Reynaldo is seen in a grainy photograph wearing sneakers, blue jeans and a tribal necklace made from the teeth of wild animals, the Huitoto have embraced modernity in all its manifestations. First, the short-wave radios that facilitated communication between one tribe and the next, reducing to mere seconds great distances to send a message, either on foot or in canoes.

Then, the arrival of books, films, music with the establishment of the state-run schools and libraries. When Reynaldo is asked if his inseparable smartphone can pick up a signal inside his maloka (circular dwelling place), at the heart of an expanse of tropical rainforest, he answers confidently: “Of course, we’ve always been connected. It’s part of who we are.”

Now, in his eighties and grandfather, El Abuelo, as he is fondly known, was in the Colombian capital Bogotá to preside over a fund-raising lunch to present the first Assembly of Huitoto Elders of the Predio Putumayo to be held mid-October in La Chorrera – and same jungle outpost that hosted the first-ever visit of a Colombian President on April 23, 1988.

Under the Spanish title Encuentro de Mayores Tradicionales Indigenas del Predio Putumayo, the assembly marks the 30th-anniversary of the government’s territorial designation of an area roughly the size of England, but whose indigenous population has witnessed a steep decline in numbers, as younger members of their community abandon the tribe to migrate to Colombia’s interior. The encroachment of intensive cattle farming, agro-industry and logging companies have also torn at the fragile social fabric that holds this isolated community together.

For El Abuelo, memories of the past are powerful, and a motivating force that must be instilled in younger Huitoto, in order to protect a sense of identity. Without the guarding of their oral traditions: “we will be doomed to disappear,” he remarks. Dressed in a blue suit and decked with the colorful headdress he made many years ago, the lunch that was organized in honor of Reynaldo had one specific objective: raise money for the transportation costs for the 60 elders who will journey, some more than two weeks across rugged and treacherous terrain that was first documented in the 17th century by European explorers in search of spices and and medicinal plants.

The Elders are in a race against time, not only to reach La Chorrera for the commencement of a once-in- a-lifetime ceremony for many, but to spread ancestral knowledge to youngsters more familiar with Facebook than the fate so many of their tribe faced when first making contact with the “civilized” world. “We will travel great distances to share our wisdom and knowledge with everyone,” claims Reynaldo, during the lunch that included his community’s most sacred offering – mambe.

The fine green powder of the coca leaf is the Huitoto’s direct link to a spiritual world, and one used in coming-of-age rituals, marriages and funerals. But, before the construction of telecommunication towers in the jungle and accessibility to cell phones, mambe was the “messenger” that kept everyone connected. At a specific time in the day, the elders would gather in a circle, and while mambeando, chant for the well-being of fellow citizens, the animals in their forests and Mother Nature. “It is only when we can hand down these memories to our children that we earn our rightful place on this planet,” believes Reynaldo.

In order for the Huitoto to have a complete visual record of their unwritten history, the award-winning film production company 4 Direcciones have begun documenting every aspect of their daily lives, from sacred mambe ceremonies to accompanying these hunters and gatherers on long walks through the jungle.

Using high-end video technology, including Virtual Reality, to capture that which for many is rarely seen, the company’s co-founders, Diana Rico and Richard Decaillet, spent months living among the Huitoto. At the Encuentro de Mayores, the producers, who refer to themselves as members of a “cosmic underground,” will hand-over to the elders an interactive archive, and one of the most comprehensive ever conducted with an indigenous group. “It’s a roadmap of where we come from, and what we need to preserve,” claims Reynaldo. “Not just for the Huitoto, but for all humankind.”

President Barco’s prophetic speech 30-years ago marked a milestone for the recognition of Colombia’s indigenous peoples. But, above all, it initiated a change of perceptions regarding indigenous identity, autonomy, right to self-determination, social inclusion and empowerment. While just a century ago they were described by the barbaric rubber merchants as “savages,” today they are recognized as the guardians of so much untapped knowledge.

“This is the beginning of many assemblies, and a call for unity,” remarks Reynaldo. For future generations, the gathering is their opportunity to connect with the natural world that has defined them, and by choosing to embrace digital technology, soar virtually above the rainforest and chart their way to a bold new future. For this is the true power of mambe, the harbinger of connectivity at the heart of the Huitoto healing.

Colombia’s Alto Baudó: At the crossroads of oceans