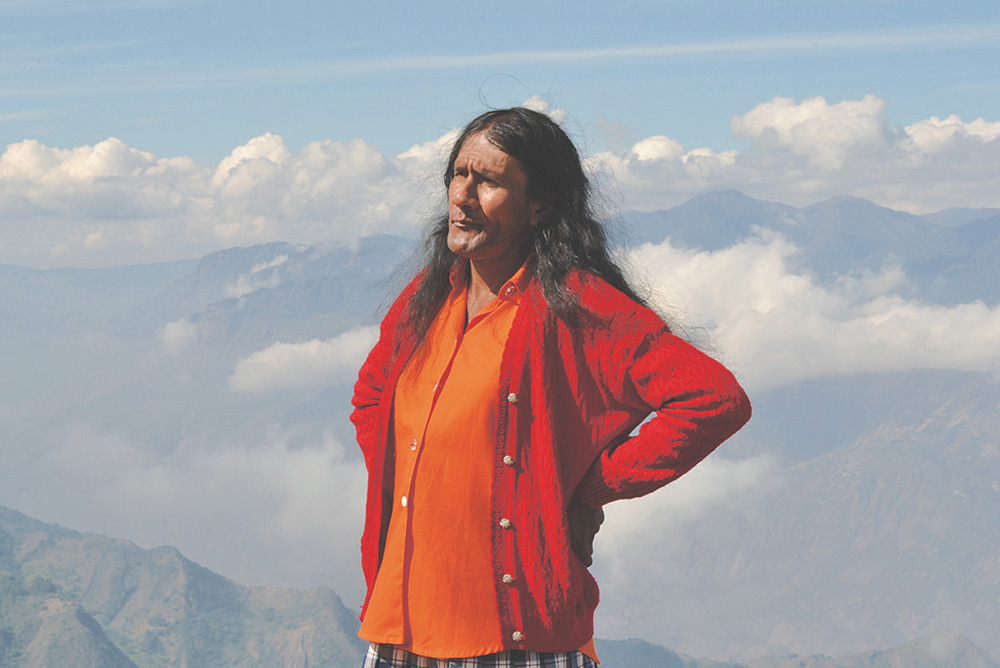 Film director Rubén Mendoza is clearly not afraid of taking cinematic risks after he spent six years venturing into the hills of Colombia’s Eastern Andes to document the life of María Luisa Fuentes. María Luisa, or Señorita María as she likes to call herself, is a subsistence farmer, who lives alone in a remote hut, surrounded by fields of corn, eucalyptus groves and green fields.

In the opening scene of Mendoza’s 90-minute documentary Señorita María: La falda de la montaña (Miss María: Skirting the Mountain), the director follows this campesina as she walks along a muddy road in a swaying red skirt and turquoise sweater. There is nothing unusual about the Colombian setting until the camera moves in to capture the everyday details of the protagonist, who began calling herself ‘María’ at age 18 in reverence to the Virgin Mary. “The Blessed Mary never wore pants,” she says.

María Luisa was raised in the care of her grandmother, María Patrocinia Burgos, as a little girl, dressed in immaculate pinafores and in isolation, as she recalls. For the townsfolk of Boavita, in Eastern Boyacá, María Luisa’s gender has been a source of conflict and dismay.

Her presence at Sunday Mass, after a two hour walk from her house in the mountains so familiar to her, causes suspicion. Is she a man or a woman? Why does a man dress in women’s clothes? The notion that there is a third gender or fluid person amongst them is a far-fetched concept, giving way to rumors, sneers, and finally to Señorita María’s self-imposed exile.

For the very few people in town, who need help to harvest the corn or haul heavy milk pails to the market, Señorita María is just a strong person, dedicated to the upkeep of her plot of land, and a devout Catholic as any other member of the tight-knit and closed community.

Not so for the majority. Boavita is a village known as a bastion of arch- conservative values, and birthplace of the chulavitas, the death squads, of the Conservative party during la Violencia, the period of violent political conflict between the Conservatives and Liberals between 1946 and 1958. In the land of the chulavitas, many of the recalcitrant elders remember the woman as a boy in elementary school. For them, Señorita María remains a freak of nature, born out of wedlock, the product of incest and having “a pig’s tail.”

María Luisa is a member of the third gender – term used to describe those who are neither male nor female; accepted in many societies, past and present. In India, for example, they are called “hijra,” for the American Indians “two-spirit people,” and in Japan, the “wakashu” are venerated for their beauty. In a court ruling last month, the state of California joins India, Canada and Australia in allowing intersex persons to acquire gender-neutral birth certificates.

In Colombia, the Constitution of 1991 recognizes the right to identity, freedom of sexuality, and freedom to determine one’s own gender. A ministerial decree of June 4, 2015 facilitates transgender, intersex and transsexual persons to determine or correct their gender in their cédula or identification card by a simple notarial procedure, and avoiding psychological and medical exams to determine such a change. Intersex newborns and children have access to integral medical support without the prerequisite of having an ID card. Same sex marriage and unions, as well as same sex adoptions are recognized by the state. Discrimination by gender and sexual orientation is a crime punishable by law in Colombia.

But, in rural Colombia, Señorita María claims to have been shunned by her community for her love of dresses, wearing heels to church, and mocked by youngsters when she walks down a street. “For the people of the village, I don’t exist in this world,” says María. “They told me it was best not to talk to anyone.” Some villagers even contacted the local priest to “exorcise the demon in me.”

When Señorita María’s grandmother died, she became even more reclusive, living alone on the mountain, and remaining a mystery to even the very few people she had contact with. “I would have loved to get married and have children,” says María in an interview with The City Paper as Mendoza’s film opens October 23rd in theatres across Colombia. But, Señorita María is skeptical the film will change people’s attitudes towards her or change her life. “I still have to work my plot of land in order to buy a block of panela,” she says without a doubt.

At age 37, Rubén Mendoza has directed two critically acclaimed films: Sociedad del Semáforo in 2010 and Tierra en la Lengua in 2014. The documentary genre is very much at the heart of his visual storytelling, and a profound way to connect with people who exist in often unseen utopias, some self-imposed like the members of the Traffic Light Society, others, as in the case of Señorita María, by destiny.

Having studied film in Cali, a city known for its importance to Colombian cinematogrphy, and influenced by Luis Ospina, a founding member of the so-called Caliwood movement, Rubén, through close family ties, had to visit Boavita on many occasions, making the long overland journey a trip down memory lane.

On one occasion, 10 years ago, he went to introduce his Spanish girlfriend to his grandmother, who had just donated the village’s retirement home. It was then when Rubén saw María Luisa standing by the side of a road. “I immediately recognized her as the woman at the heart of so much local mythology,” recalls Rubén. “‘Here, is a very peculiar beauty,’ I thought to myself.” But, the idea of making a film was still years away.

After a residence scholarship in Cannes, France, in which he “really didn’t have a story to tell,” Rubén returned to Colombia to say his goodbyes to his dying father. Knowing that María Luisa was still living alone in the mountains, it dawned on him that he had the subject of a future film.

“I wanted to understand the inner strength of a person who has survived against all odds,” claims Rubén. “I knew this story would occupy many years of my time, and change my life.”

Rubén headed into the hills with his camera to see if he could establish a conversation. María Luisa’s suspicion of outsiders, especially of a man claiming to make a movie about her, took time to ease. But, a friendship began to consolidate between them, and Rubén began to document the intimate stories of María’s life, from her bouts of epilepsy – a “demon” that can be cured – to memories of not being able to return to school after just three months of elementary education.

“‘Be careful with your friendships’, my mommy used to tell me,” she recalls, referring to the most important female role model this 46-year-old heroine calls her grandmother. María Luisa was abandoned one week after birth, and seems to know nothing of her biological parents.

Knowing he had come across an epic story – but above all – “an amazing person,” Rubén Mendoza began filming over 15 days the life of María Luisa. He does not follow a conventional narrative, and captures with exquisite beauty sweeping landscapes, and makes nature as much of a protagonist as is the woman of the mountain with her scarred hands and long-braided hair.

After months of careful editing, and elaborating a soundtrack with music by the children’s brass band of the village, producer Amanda Sarmiento and Rubén Mendoza presented their intimate film at the 57th Edition of the Cartagena International Film Festival, and took home the prize for Best Director. The film also won the Zonta Club prize for Best Director during the Critics Week of the 70th Edition of The International Movie Festival of Locarno.

As a very religious person, María Luisa has left her future in “the hands of God.” While it seems that divine intervention spared her from the violence that ravaged so much of the countryside, especially in a remote corner of Colombia with heavy guerrilla presence, her sheltered life has now been unveiled.

For Rubén, he hopes a cloak can be lifted on ignorance so many have regarding the third gender, especially at a time when the country is reconciling its violent past with an on-going peace process. “I don’t make films to satisfy any specific group,” affirms the director, making it clear that his film is not intended to advocate any cause. “I make films about those who have graduated from suffering.”

As the documentary is heading to the IDFA Film Festival in Amsterdam, Rubén would like to show his work in Boavita, and in the company of Señorita María. Understandably, she is nervous of this proposition, and should she decline, fearing it could generate even more ill-feelings among locals, the director will abide by her decision. “There is a purity in her heart, that I profoundly respect,” says Rubén, looking across a table where Señorita María is dressed in a tropical print blouse and draped in a sweater to fend-off the Bogotá cold.

As she smiles her way through difficult questions regarding her identity, isolation and austere living conditions, María Luisa is all too aware that her gender will continue to be a cause of mystery to many, whether it be close to home, surrounded by majestic mountains, or in big cities such as Bogotá, where the third gender is yet to be fully understood. 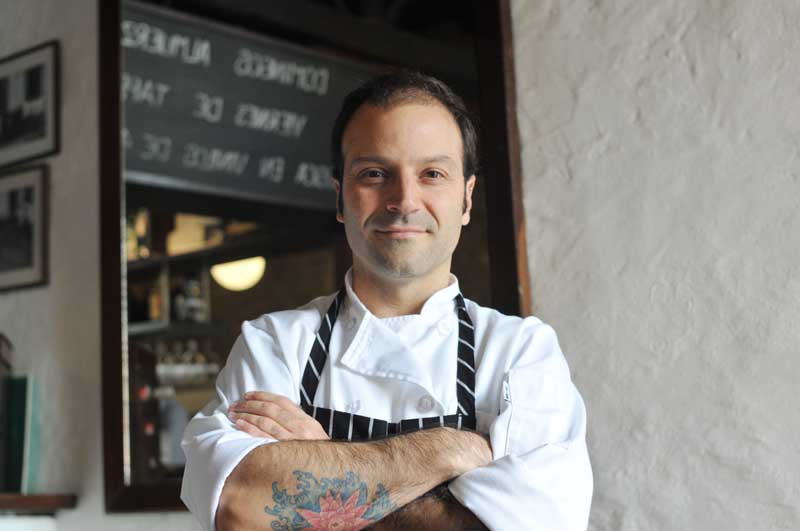 The ‘B-Side’ of gastronomy