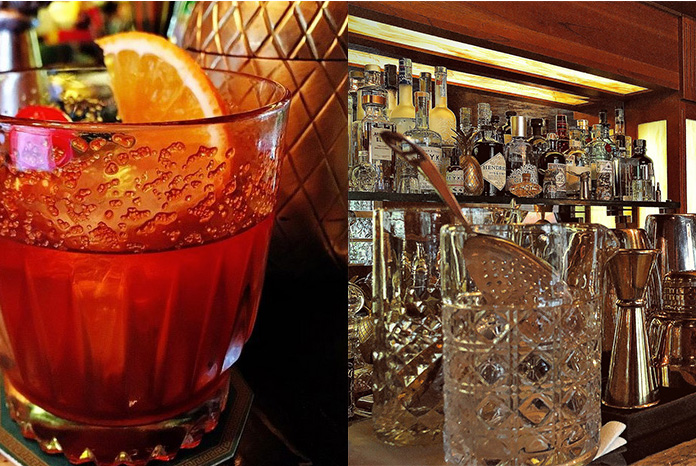 For a very small venue, El Enano has deservedly earned a very big reputation for its cocktails, inspired by classic selections and baptized with names such as Super Constellation, Sad Concorde, Star Liner, Douglas 63.

This cozy oak-paneled bar in what used to be a storage space for El Bandido restaurant is a tribute to the golden age of aviation and airport lounge culture when the lounge was the airport. Martinis served with precision, and an Old Fashioned shaken and stirred, it’s dusk and the Dwarf slowly awakens.

The echoes of the Sixties is also present in print with issues of Playboy on top of the half dozen small round tables facing an L-shaped banquette. While the setting is ideal for a Frank Sinatra playlist, starting with Come Fly with Me, I am drawn to find the funnies on the sleeve of an intact centerfold published the year I was born, but the zeitgeist gets the better of me, and I find myself ordering the first drink of the evening: the Air Ambassador. Served in antique glassware, this Bourbon based cocktail with Angostura bitters and chartreuse is a creation of El Enano’s award-winning bartender Fabián Pulido.

Voted last year by Condé Nast Traveler magazine as one of the 10 best cocktail bars in the world next to ones in Berlin, Stockholm, Toronto, London and Paris, El Enano is the brainchild of the architect-turned-restaurateur Felipe Rodríguez, and opened as its own unique space within El Bandido in 2015. Even though both venues share the same kitchen with chef Felipe Arizabalete at the helm, El Enano seats just 20 and offers a menu that includes the raw bar staple Pacific oysters, deviled eggs, mini hamburgers, steak tartar and tuna terrine.

With its turn-of-the-century mahogany bar and under-lit to create a sense of intimacy and decorum, El Enano also offers guests the chance to enjoy their drinks and entrées in a small garden. The mirrored effect between the dusky 40-square meter bar and adjoining tropical garden accentuates the saloon narrative that would have had Truman Capote reaching for his second Comet, a mix of Cognac, Cointreau, hints of orange bitters and apricot marmalade. And if Hugh Hefner found himself in a bathrobe beneath a framed front cover of his famed magazine, he might have ordered – as I did – a Carabelle, served in rustic Venetian glass with spiced rum, Jamaica black peppers, grapefruit, lemon juice, and aromatized with orange bitters.

El Enano makes for a very enjoyable evening out on the town and chance to try the house’s very extensive selection of drinks, including botanical heavy Gins such as Monkey 47 and absinthe distilled by La Fée. Now when you are served a shot that rewrote history in the hands of Oscar Wilde and Charles Baudelaire, you know you have entered hallowed space. But make a reservation ahead of time, because as one of the world’s 10 Best, this little backroom secret is a secret no more, especially when The Dwarf and the Green Fairy work their spirit magic.