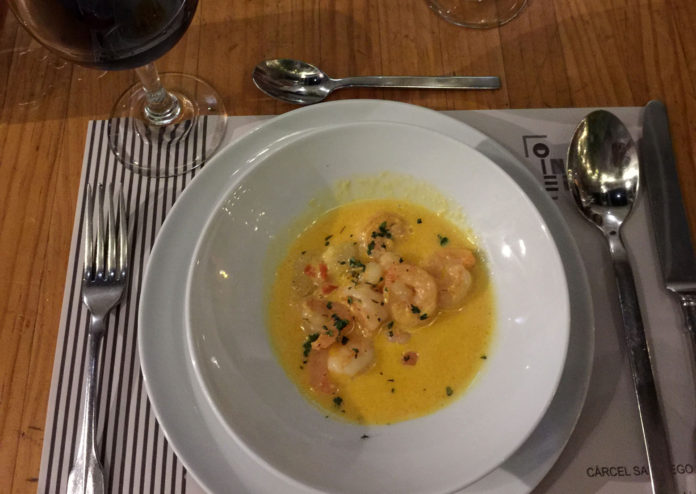 El Interno (The Intern) offers exquisite food, agreeable atmosphere, and friendly service. This restaurant, within the ramparts of Cartagena’s Old City, is different from any other. What makes El Interno so unique is its location within the Cárcel de mujeres de San Diego – San Diego’s women’s prison.

A year ago, San Diego was a cramped, dank correctional facility where inmates had plenty of free time to pick a fight. “If you had to pass weeks, months, or years trapped inside these four walls, you would probably struggle to adjust to real life the day you were released,” said the restaurant’s administrator Luz Adriana Díaz.

Díaz and actress Johana Bahamón decided to help inmates find a purpose to the lives, by getting them to familiar traditional coastal recipes. “Our mission is to educate these women, give them a trade, teach them to work as a team” remarks Díaz. “If we don’t give the tools they can use when released, the only path left for them is a return to crime. Here, we only want to give them a second chance.”

In order to work at El Interno, convicts cannot have been sentenced for violent crimes. The selection process is highly scrutinizing, and rehabilitation officers carefully observe the behavior of each candidate before making their final decision. Of the 127 women currently incarcerated in a prison built during the 17th century as a convent, only twelve are chosen to work in the kitchen or garden. Others work sewing backpacks and making artisanal jewelry sold at the entrance of the restaurant.

One inmate, Cielo, was chosen as a cook, and is now in charge of preparing two appetizers and a main. Although chef Victor Vega is always available on site to guide his helpers, 52-year old Cielo feels she is now suf ciently prepared to work in any real-world restaurant once she is released. The experience at El Interno has taught her about the importance of customer service, business management, organic farming, cooking, and baking.

Cielo was charged with drug dealing, as was her husband and two of her four sons. It torments her everyday to know that her two sons who are free struggle alone without parents. Even though she is living a family tragedy, she feels she is enjoying the best moments of her life in prison. “It’s a terrible irony. How can I say that I am happy, that I am fulfilled? But it’s true. I love being in a kitchen, learning and seeing people.”

The restaurant has improved the morale of women to the extent that some of them would prefer to stay behind bars, because once they are released, it is almost impossible for them to find employment. In order to help the women who have a criminal record stay away from crime once they regain their freedom, Bahamón is now considering opening another restaurant, in front of the prison.

As the most visited tourist destination in Colombia, Cartagena lures in the movie stars, writers and its share of jetsetters. With visitors wandering the colonial streets of San Diego from every continent, some do venture into this prison. “They have never treated us badly or insulted us,” says Cielo of El Interno’s international clientele. “They are always very kind, and curious.” The most common question we get asked is: “Why are you in prison?” But locals, according to this inmate, aren’t as enthusiastic as foreigners.

“The people of Cartagena are very difficult. They don’t want to come here because they don’t think they have a reason to help people who have failed society,” claims Díaz. “I think that outside these walls, there are people who deserve to be in prison much more than some of these women.”

Then, there’s the question of race. Cartagena has a majority Afro-Colombian population, and 70% of San Diego’s prison population is black. “It hurts me to think that so many Cartageneros avoid this restaurant because of its ‘blackness’,” affirms Díaz.

If you stumbled into this restaurant by chance, not knowing anything about the building, you may not even notice it’s a prison. The décor is pleasant, and several dozen women work in an open kitchen like so many others that make Cartagena a culinary destination. These former guerrillas, paramilitaries, thieves and drug peddlers are very busy at work, stirring bowls of fresh ceviche, frying their carimañolas (local delicacy made from yuca) and attending guests over chilled bottles of wine. But, despite the warm atmosphere, the restaurant is still a prison. Security guards keep a distance and act discreetly so that patrons don’t feel they’re being watched.

There is a fixed menu at $90,000 pesos per person and includes a starter, main, dessert and tropical juice. Wine is extra.

A choice of five starters tops the menu, including a fish tiradito with tamarind and shrimp in a shredded coconut fry-up. Mains include a rice and seafood stew (Arroz caldoso); fresh catch of the day in a golden coconut sauce (Pesca del día en salsa de coco quemado); a sweet tenderloin roast with coconut rice (Posta cartagenera y arroz titoté) and grilled eggplant in pesto and Neapolitan sauce. A refreshing selection of traditional sweet postres for dessert and juices made from corozo, green mango, pineapple and coconut are also customer favorites.

All profits from lunch and dinner go into reintegration programs in 27 other women’s prisons supported by Fundación Acción Interna. This non-profit runs painting, theatre and design workshops for 33,000 inmates in Colombian prisons. “Since we began the restaurant, fights in the courtyard have been reduced to zero,” claims Díaz. “Women come to work in earnest because of the quality of our food. We don’t want customers to come out of pity or curiosity, but rather, to try the best Cartagena has to offer.”