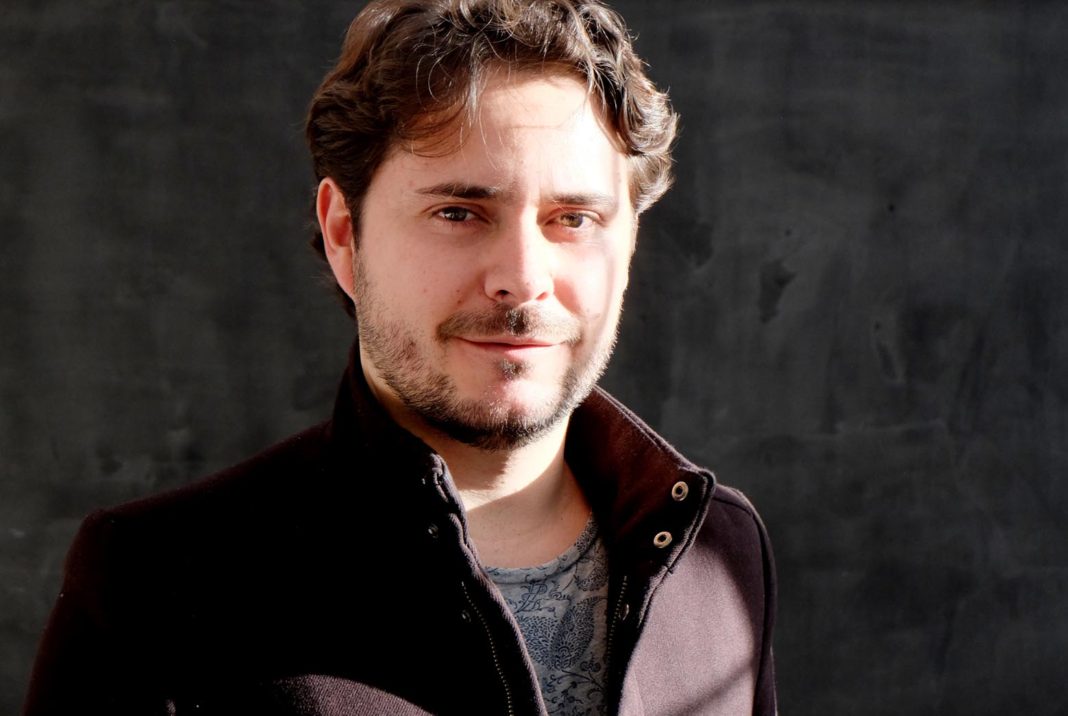 Alejandro Cuéllar is the chef-partner of Canasto Picnic Bistro, a restaurant that caters to the delicious and sustainable, while at the same time expressing Colombia’s diversity of flavors on a plate. Alongside his other passions – photography, music and film – Cuéllar has evolved a signature style to his dishes, inspired by the auteur of everything color, Wes Anderson. While making sure the world understands the complexity of Colombian cuisine, the Bogotá based chef is one in a selected group of the Colombian government in charge of preparing our representative staples.

The City Paper (TCP): Alejandro, what made you take up cooking as a career?

Alejandro Cuéllar (AC): I have been cooking since I was 14 – maybe even before – and found it to be a pleasant pastime, not much more than a hobby. When I graduated from school, I went to France and was introduced to the so-called “gastronomic culture”: in other words, everything that goes on a plate. In France, as in so many other European countries, every dish has history; a reason for existing, from the political to the social and, of course, cultural. A connection to nature is also very strong with foraging and incorporating edible flowers. This time-tested bond between farmers and consumers opened up possibilities for me, and after six months in Paris, I returned to Bogotá. While I was studying Business Administration, the only thing I could think about was exploring the heart and soul of the Colombian countryside. I had never come into contact with the nature of characters that produce what we eat, so I decided on pursuing gastronomy.

TCP: What have been the major influences in defining your cooking style?

AC: My parents have always been creative, and when my mother died in 2007, I decided on starting my own kitchen garden in the town of Guasca and named it Santa Beatriz. This natural orchard is the inspiration behind Canasto Picnic Bistro. My mother also played an important role in developing what has become a differentiator in my career as a chef: foraging and cooking with wild foods. I also needed to find a way of linking my other passions in life – music, film and photography – into my professional life.

TCP: When you refer to a “wild kitchen” what do you mean?

AC: My orchard/herb garden became a laboratory and still plays an essential role at the heart of what I refer to as my “spontaneous kitchen.” Wild plants grow in Santa Beatriz, I just collect them. This opened up the specter of botanical exploration, the edible world that surrounds us. Flowers are not only beautiful but delicious. On the farm, I also have bees, free-roaming hens, and trout. The wild kitchen exists around us, even here, in El Virrey Park, there are so many plants one could eat. In fact, one could eat all of Bogotá, if one wanted to.

TCP: Visual elements are an essential ingredient in your dishes, from flowers to botanicals. How did this happen?

AC: The “wild kitchen” became part of my culinary narrative, and I have an insatiable curiosity about my surroundings. Ironically, I never wanted to have a restaurant and was almost forced into having one. What I enjoy are avant-garde cooking techniques that I can do in my natural laboratory. Finding a culinary narrative, like the color selection in a Wes Anderson movie cannot be achieved by trial and error. Color in food can be used as a tool to communicate. Gastronomy is a language that allows me to express myself more eloquently. That’s why you won’t find me inside a kitchen.

TCP: Bogotá’s gastro scene is one of constant flux, from its many traditional eateries to the health food boom. How do you interpret sustainability?

AC: Sustainability is all about generating a positive impact on the social, economic and environmental. With one condition that the activity one chooses doesn’t negatively impact future generations in developing the same activity. I try to communicate this to my customers. If I tell someone: “No, you cannot eat meat, because it’s bad for you,” I will generate a negative reaction, and that is not a sustainable solution to any business. Sustainability is all about incorporating good practices in food.

TCP: Another term widely used as a gastronomy sales pitch is “buy local.” Is it realistic to operate a restaurant with only local products?

AC: Sustainability doesn’t always mean buying local, either. What happens if you live in England and want to plant tomatoes? In order to do so, one has to invest in heaters, a greenhouse, this process generates more greenhouse emissions, which are harmful to the environment than if one purchased a tomato from Spain, which, because of its abundant sunlight, produces tons of tomatoes.

When we talk about sustainability, we also have to consider social conditions in the Colombian countryside, where the high school drop-out rate is the highest in the country. If a farmer puts his sons and daughters to work by picking potatoes, our love for “buying local” contributes to educational desertion. I think that the secret of being sustainable is reflected in my menu as conscious food. If you buy from a provider, get to know the provider. What we often forget when we buy local is the human ingredient.

TCP: Since you started in this industry, how has the farmer-consumer relationship evolved?

AC: There has been a professionalization along the supply chain as restaurateurs become more demanding and look to new business models. When you go into a supermarket, you are the 8th intermediary in the farmer-consumer relationship. So, if one potato costs $800 pesos, how much did the campesino get? Food Apps, such as Mucho Colombia, are transforming the way many restaurants function. As we reduce the number of intermediaries, we can operate more efficiently, and contribute to much-needed prosperity in rural regions.

TCP: What are the origins of Canasto Picnic Bistro?

AC: In 2014, I won the Chef Revelation of Colombia prize by the industry publication La Barra. I didn’t have a restaurant or a business back then, but somehow the jurors liked what they ate. All I had was my vegetable garden and cooked every day. What I really think helped me win the prize was a sense of the visual. Before I realized what I wanted, I knew what I didn’t: a sophisticated degustation restaurant. I wanted a venue where clients could eat healthy, with reasonable prices and a place that was pretty. After two years of developing the concept, Canasto opened in 2016.

TCP: How would you sum up Colombian food habits when it comes to gastronomy?

AC: Colombia is biodiverse, and a country that is also culturally diverse. Wherever you go, things change dramatically. In one hour by car, you can travel across different thermal layers, climates, and this, of course, includes food. As food is so abundant in Colombia, we take this abundance for granted. When one is surrounded by mango, nobody wants to eat mango. Foods that are foreign generate an emotional response. I fear that in many ways, we don’t appreciate our gastronomy, which is why I firmly believe that as Colombians, we need to give dignity to our plates. Because we have so much, we lack innovation. Why pick a mango today, when you can pick one tomorrow? In Argentina, like so many other countries where food is seasonal, I learned to cook with limited products. This, in turn, creates plenty of byproducts.

TCP: How do you promote Colombian gastronomy in foreign countries?

AC: One thing is to “show” our gastronomy to the outside world, another thing altogether is to show it to the locals. For me, a kitchen communicates regardless of physical boundaries. If we learn where something came from, how it was made, who farmed it, we put food within a context. Like music, film, art and photography, gastronomy is an expression of culture. When I travel overseas, I prepare Colombian plates with ingredients that I find specific to each country. What’s the point of preparing a typical Colombian dish in a place like Vietnam, if local cooks have no way of reproducing it?

TCP: Is there such as thing as a national dish?

AC: I am one of many chefs working with the Ministry of Foreign Affairs (Cancillería) in helping promote the Plan de Desarrollo Gastrónomico; a development plan that safeguards culinary heritage, but also looks to innovate with ingredients and cooking techniques. Gastronomy allows us to tell stories, and Colombia is a nation of storytellers.

TCP: In the year of the bicentenary, if Simón Bolívar came to Canasto Picnic Bistro, what would you serve him?

AC: From research, Bolívar liked a dish made from achira, a root that can be made into purée, and soups. At the time of Independence, people ate very differently then, to what we eat today. The Ajiaco and Bandeja Paisa go back just 100 years. Colombia’s main culinary influences come from Spain and Africa. Cultural collisions are good for gastronomy. Our plates are constantly changing because culture constantly changes. Chefs today get their inspiration from multiple sources. If I prepared a dish inspired in reggaetón, would you eat it?

TCP: You mention that food must generate an “experience” on many levels. How does one create an experience in a plate?

AC: My kitchen works with a set of norms. First, it has to be delicious. Second, pretty to look at, even though Canasto Picnic Bistro is 100% based on my menu, it is not my restaurant. It has its own identity. When you dignify a kitchen, people are grateful and give thanks. Experience works at many levels, even spiritual.

Céntrico: Dining above the Bogotá horizon