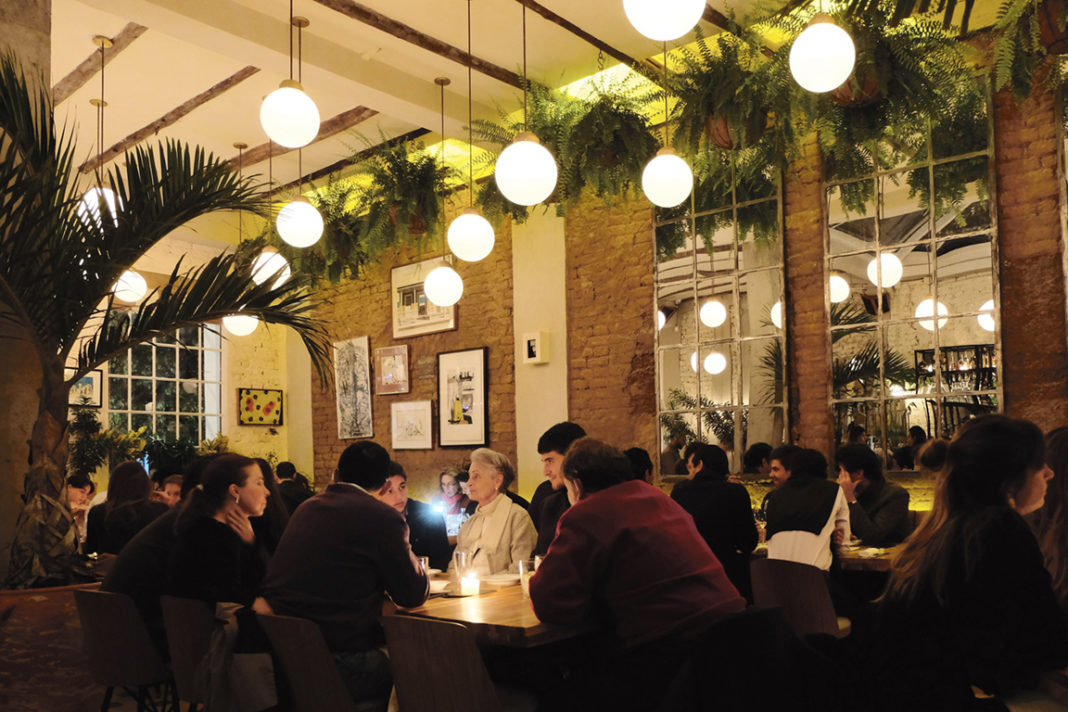 When you arrive at a restaurant at 4pm to interview the chef and find him sound asleep on a sofa after a busy December lunch shift, I am convinced it is a good sign! That is utter dedication and hard work.

This was my third time visiting Café Bar, located in the hip Calle 65 and Car- rera 4 area of Chapinero, beside Fudo and the soon-to-open Chato. You enter through an unobtrusive metal, and slightly battered, doorway with no name at the front and arrive into a bright, cool, casual, unpretentious place with a European feel and a large bar to one side. It has around 12 tables, lots of hanging plants, and indoor trees.

While I order tea and start to devour a delicious homemade terrine, Andrius Jonas Didziulis rises from his slumber, fresh faced after his siesta. Son of Colombo-Lithuanian parents, Andrius was brought up in Colombia, Miami, and Venezuela. He went on to study environmental engineering at Los Andes University in Bogotá and, through an internship, graduated in New Orleans where he discovered his passion for cooking, kitchens, and visiting different restaurants.

Andrius started a course in the Le Cordon Bleu culinary academy in Lon- don but soon abandoned to throw himself into the reality of working in different kitchens across the U.K. capital, including The Ledbury and The Square, a renowned recipient of two Michelin stars. After learning about modern British cuisine, he moved to Paris, where he lived and worked for three years in restaurants such as Spring and Michelin three-star honoree Guy Savoy.

Having acquired the love for French seasonal cooking, he returned to Colombia intent on opening up a bistro-style restaurant in the capital. His visionary partners found the perfect location, and they opened the doors to Café Bar in late 2016. Andrius brought his Parisian friend Anais with him to work as a chef and help design the menu. The name Café Bar follows the concept of casual and unpretentious locales you find in European neighborhoods, where you can relax, wine, and dine in a friendly atmosphere.

Andrius and friends want to be at- tuned to the area. Nearby is a typical “panadería de barrio” bakery where taxi drivers stop to take their morning tintos, have their pandeyucas, and smoke a cigarette. The neighbors like him — so much so that the panadería operators next door helped him out in an emergency, allowing him to take over their oven when his broke down during a busy evening shift.

As we listen to Van Morrison, Andrius describes his cuisine as food from the market, buying his vegetables and lettuce from nearby organic boutique farms or Bogotá’s famed Paloquemado market. His fish, including fresh lobster and hake, generally come from fishermen in Tumaco on the Pacific coast, and he buys his organic chicken and lamb from Mitch Pineda’s farm in Subachoque. He and Anais design the menu according to what is on offer, changing the menu and coming up with new dishes all the time.

One day they woke up wanting to cook French onion soup. So they bought the ingredients and placed it on the lunch menu. This is what’s called seasonal cooking.

My lunch took place on one of those sunny December days in Bogotá, with a close friend who is well travelled and appreciates fine dining. We ordered the pulpo a la gallega (grilled octopus with paprika) and morcilla (blood sausage) for starters, followed by the hake and pappardelle with fresh lobster. We accompanied it with an outstanding bottle of chilled Albariño Spanish wine and tasty homemade whole wheat bread. The hake was cooked perfectly in olive oil with fresh aromatic herbs, the pappardelle and lobster was tasty but perhaps a little over salted. To complete a wonderful fusion of tastes, we ordered the lulo marinado, a delicious and refreshing citrus-fruit-flavored sorbet-like dessert.

My only recommendation to Café Bar would be to go easy on the salt, continue to train the waiters, and buy a proper espresso machine.

Café Bar’s prices are honest and customers will appreciate this; an overpriced and overrated restaurant in Bogotá is a complete turn off. Café Bar is not trying to fit in with other restaurants or follow local trends in the Colombian capital. It is a genuine place, full of personality, authenticity and warmth. I hope Andrius was able to fit in more siesta time over the New Year break in order to recharge his batteries and come back to face a successful 2017 running this gem of a place in the heart of Chapinero.

The chef who went from Villain to Repented Vegan