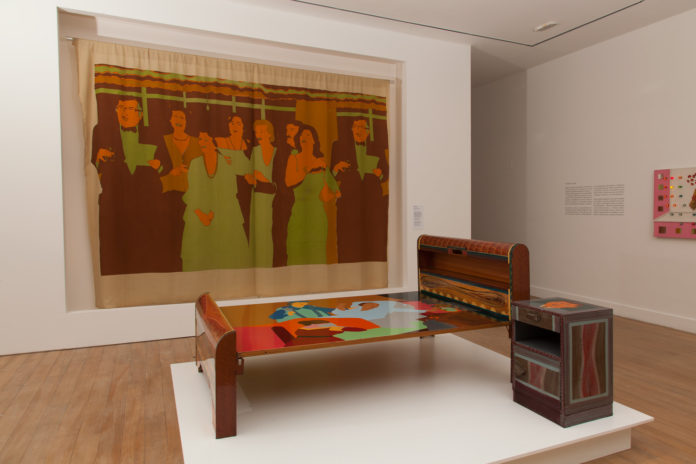 “You have taught us to SEE, giving aesthetic category to shapes, colors, to images that in Colombia we considered corny, vulgar and unsightly. You knew how to appropriate that whole world and show it to us and made us see and appreciate it.”

Beatriz González (b.1932) reopens the Museum of Art Miguel Urrutia (MAMU) on October 15 with the largest exhibition by the Central Bank – Banco de la República – to the artist and which spans six decades of her career. The exhibition is organized by the Museum of Fine Arts in Houston (MFAH) and Pérez Art Museum in Miami (PAMM), two international venues that house collections by the “The Master” as the retrospective is titled.

Closed for six months as a result of the national quarantine with the coronavirus emergency, the reopening of MAMU to showcase the stature of Beatriz Gonzaléz, follows one dedicated to another woman artist, Clemencia Echeverri, which also opened last year in October. Contemporaries of major historical events that have shaped this country during the last half-century, both artists through different mediums, provoke a slate of emotional reactions.

Curated by Mari Carmen Ramírez and Tobias Ostrander, Beatriz González: The Master consists of 100 works, the majority of which are paintings, but also sketches and illustrations. A complementary exhibition that opens on October 30 includes the artist’s personal documentary and photographic archives and the first time they are shown to audiences.

Beatriz González is a keen observer of Colombia’s social and political realities, critical of ruling elites, feudal patronage, and atrocities of the armed conflict. Her work also reflects a profound empathy for the victims of violence, the displaced or disenfranchised. Even though the artist considers herself “a painter from the provinces,” her narratives are hardly provincial, revealing a self-aware irony and critique of middle-class notions of taste, class, gender, and ethnicity. She also appropriates images from the Western Art cannon and Colombian mass media through a particular model of figuration that includes the flattening of figures and the use of a strong color palette that evokes commercial advertising.

From the late 1960s and seventies, the artist expanded her use of editorial images, drawing inspiration from cheap, popular reproductions of nationalist motifs and crime-scene photographs from newspapers, as well as politicians, religious leaders, and icons of international pop culture. The clippings she collected were mechanically reproduced and have faded with time, reflecting the sensibility of Colombian culture over those two decades, while also serving to underscore the physical and virtual distance that separated Colombia from the cultural centers of European cities. In the early seventies, González began to paint these images, as well as other works inspired by Renaissance and Modernist masters, on the surfaces of cheap metal and wood furniture, thus creating some of her most iconic and celebrated works.

One protagonist in the extensive repertoire is “Lo Colombiano” with often contradictory expressions. But there is also a more ominous side to this “Colombianess” which is entrenched in decades of turbulent political history. In the early eighties, González’s strategy pivoted along the same lines as the country’s partisan political climate, marked by corruption, social fragmentation and ethnic inequalities. With irony and humor, González criticized the way the government represented itself in the media, particularly under Presidents Julio César Turbay Ayala and Belisario Betancur.

The storming of the Palace of Justice in 1985 by the M-19 guerrilla represents a turning point in González’s work. She herself recognizes that after this massacre her political and artistic position changed: “Colombia ceased being a comedy and became a tragedy.” From then on, González’s work turned towards representing the characters involved in the conflict, especially the victims. Thus, she abandoned what she called the “happy” colors (shades of pink and orange) and instead introduced tones that encompassed a wide spectrum of deep green, blue, yellow, purple, black, crimson, and chestnut: dense and sorrowful colors associated with blood and death.

This exhibition includes several examples from the series Las Delicias. Produced between 1996 and 1997, these paintings are based on images of the grieving mothers of 60 soldiers kidnapped by the FARC at the military base in the town of Las Delicias and held captive for 288 days. The series also includes a nude self-portrait in which the artist paints herself with her hands over her eyes. González has stated that her intention during this period was to “invent an image that embodied pain.”

According to Ángela Pérez, cultural assistant manager of the Banco de la República, “the critical perspective, sarcasm and delicate observation of the cultural peculiarities of the country make González’s work an invaluable historical document for understanding the relationships between art and social criticism in the last century.” Her unmistakable visual narrative has also been recognized with many prestigious awards on the national and international circuit. González’s paintings also belong to museum collections in the United States, London, Spain and Germany, as well as the permanent Art Collection of Banco de la República. The exhibition is free to the public and runs to December 7.

The inaugural talk takes place virtually on Saturday October 17 at 11:00 am with the presence of the artist and curators. Link to Banco de la República Museums Facebook page »

Following strict biosecurity recommendations, entry to the exhibition requires a reservation that may be booked as of October 8. Groups of up to seven people can register. Schedule your visit »

The exhibition will also be available to virtual viewers. A digital exhibition as a timeline and a 360º tour will allow those who cannot visit the museum to enjoy all the works on display and appreciate the many details of the exhibition’s layout and design.

In dialogue with the retrospective, El Parqueadero—MAMU’s artistic projects lab—will present an exhibition on one of Beatriz González’s most intimate and least studied aspects: her role as an archivist. Curated by artists Natalia Gutiérrez Montes and José Ruíz Díaz, it opens on October 30. More info »