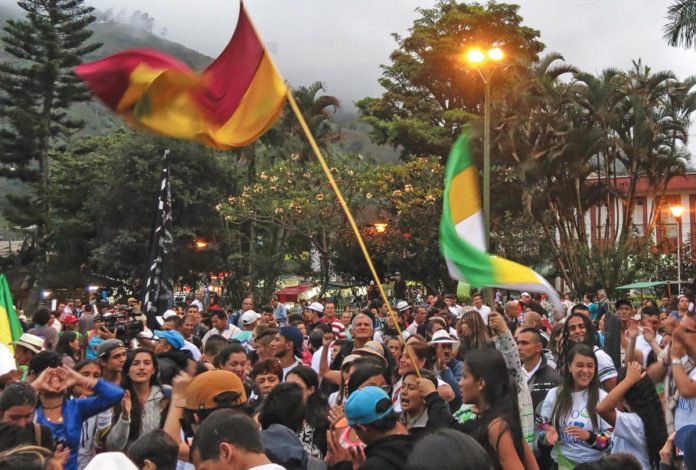 Last month, residents of a small town in central Colombia sent a clear message to the Colombian government that they do not want large-scale mining in their backyard. In an almost unanimous vote, 97,9% of 6,296 eligible voters, attempted to block the South African mining giant AngloGold Ashanti from opening one of the the world’s largest planned mines, known as ‘La Colosa’.

“I voted no for the future generations. I have two nephews of seven and three years old. Even though they do not live in Cajamarca, I know that I want them to enjoy the little I’ve been able to enjoy so far, as it concerns the countryside,” said Camila Méndez, a 21-year old social sciences student living in Cajamarca, just a few hours before the announcement of the vote’s results. Méndez is a member of the local youth organisation Cosajuca. “If we win…we’d show the complete world that Cajamarca is able to defeat a huge multinational enterprise, the mining monster, AngloGold Ashanti.”

The popular vote functions as a protective measure if collective rights are considered endangered, including long-term impacts caused by mining and energy projects. However, the result of the popular vote does not necessarily mean the La Colosa project is doomed. A legal battle between the multinational and the Colombian government is still pending, and AngloGold Ashanti has already publicly communicated that the company will try to continue with the project while it studies the consequences of the vote.

That didn’t stop residents from celebrating, though. As soon as the results were announced, hundreds of people congregated in the center of the village. Many consider this victory the culmination of years of hard work and a slap in the face to a mining project that is now officially labeled as unwanted by the residents of this Tolimense town. The La Colosa outcome sets a precedence to other communities opposed to mega mining projects that potentially pose serious environmental risks.

Many rural residents took to the polls concerned that La Colosa would adversely impact the agriculture upon which their livelihoods depend. “According to the company, mining has nothing to do with agriculture, but that is something illogical,” believes Luz Dary. A mining concession overlaps two hectares on which she and her husband José Joaquin farm cilantro, beans and peas. “I cannot offer contaminated products to my buyers. This would be irresponsible of me.”

AngloGold Ashanti’s La Colosa seeks to extract 33 million ounces of gold from a deposit considered by geologists as one of the largest ever found in Colombia and the largest of its three projects in the country.

While La Colosa is still in an exploration phase, the planned mine has become one of this country’s most contentious issues pitching environmental groups against the government and mega-mining interests which are protected by the 2001 Mining Code. The South African company and its subsidiaries currently hold 20 mining titles across this country’s 32 departments.

With gold concentration at La Colosa estimated at 0.82 grams per ton, a large amount of waste will be produced per gram of extracted ore. Depleting the estimated gold reserves would require blasting some 1,250 million tons of rock. The most feared impacts are intensive water use, deforestation and acid mine drainage, which occurs when hidden ground layers containing sulfides come into contact with water and air. If they react together, the process of acidification dissolves very harmful metals and metalloids, such as arsenic.

Many Colombians have grown distrustful of mega mining projects and AngloGold Ashanti’s reputation around the world. The corporation had the dubious distinction of being branded with the Public Eye Award in 2011 for its contamination of land and poison- ing of people in Ghana. In the Democratic Republic of Congo, the company was accused of financing paramilitary groups, and in South Africa a court made a landmark ruling to allow for a class action lawsuit for miners to seek reparations for medical expenses, damages and loss of wages due to unhealthy labor conditions.

AngloGold Ashanti could not be reached for additional comment about the vote in Colombia and their La Colosa project beyond their public statement.

Then there is the potential seismic threat. Under the mining development zone there is a dangerous geological fault line known as the Palestina, that crosses under the planned AngloGold Ashanti tailings dam. For geologist Julio Fierro, the stakes of constructing a high altitude dam at 3,000 meters “is an irresponsibility you cannot wrap your head around”.

There have been failures in respect to fault lines and mines elsewhere in South America. In November 2015 when the tailings dam of the Brazilian mining company Samarco collapsed, 19 people were killed while a river became polluted and many people were displaced from their livelihoods. A tailings dam contains a toxic sludge that, when it breaks, irreparably impacts the environment. Just 15 kilometers from the proposed dam is an- other active fault line, The Ibagué.

With unsteady topography and its proximity to a large urban center, many critics of La Colosa believe the venture is far too risky and a man-made disaster at the heart of one of the most agriculturally-rich regions of the country.

“The case of AngloGold Ashanti’s planned tailings damn and accumulation of rocks of more than 250 meters high (820 feet), constituting on the body of the dam in a seismic active region – is madness,” Fierro said.”It will be one of the five biggest mining dumpsters in the world.”

According to the Alexander von Humboldt Institute, 50 hectares of the La Colosa Project overlap with a moorland, as do many titles of AngloGold Ashanti.

Renzo Alexander García, a biologist at the University of Tolima in Colombia, says this is illegal.

“[The project will] disappear mountains, contaminate soils, water, air and put at risk collective rights for a clean environment,” believes García. “For present and future generations this will affect the food production of the region and completely terminate the dynamics of the ecosystem,” he said. For activist Camila Méndez, La Colosa’s impact threatens more than a fragile, Andean ecosystem. “Dignity has no price, a farming culture won’t be sold because of pressures by the government and foreign companies.”

A longer version of this article first appeared in Mongabay.com