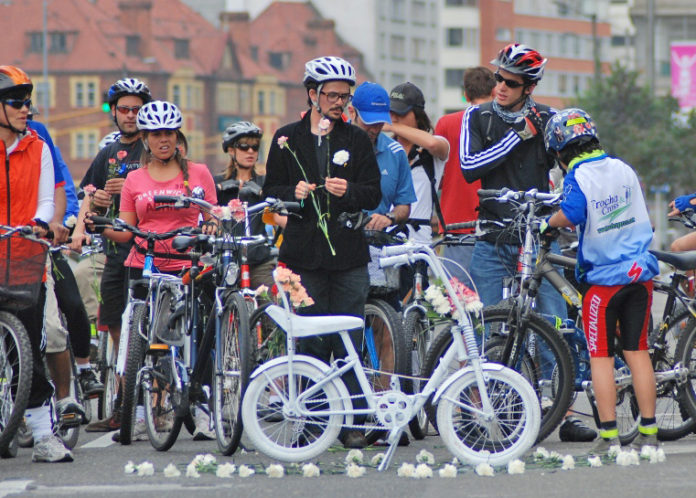 Bogotá takes great pride in its two-wheeling culture, and for having designated bike lanes that cover 500 km of the city moving an estimated 800,000 every day. The city’s bike-friendly infrastructure and policing within the stations of the mass transit system TransMilenio may give cyclists extra peace of mind when storing their bikes, but sadly, once out on the Cicloruta, they are as prone to insecurity as pedestrians.

March was a violent month for cyclists in Bogotá with three attacks in different localities of the city, all of which claimed the lives of their victims. The death of a 25-year old after he was stabbed in the chest during a mugging on a bridge spanning the Calle 26, confirmed to authorities a dangerous trend in bike theft, in which attackers are using firearms and knives. The deaths of cyclists Oscar Rodríguez and José Silva in similar circumstances and days apart has sparked outrage among Bogotanos increasingly worried about the insecurity that has taken over streets and neighborhoods.

During the first two months of this year, the Metropolitan police received 8000 reports of stolen bikes, a 20% increase over the same period in 2017. These numbers also reveal that in the city, 18 bikes are stolen every day or almost one every hour. According to the police, the recent surge in bike theft is largely caused by the demand in the black market for stolen parts. As increasingly Bogotanos take to the ciclorutas as an alternative to dealing with traffic, there are also more expensive bikes on the road, fueling the trade in stolen accessories, including lamps, handlebars and pedals.

The proliferation of bike couriers on Bogotá streets has also exacerbated a perception of insecurity when news sources reported that a porter who was waiting for food to be delivered by Rappi was stabbed by an alleged employee of that company. Rappi confirmed that the incident did take place on March 6 involving an unidentified “Rappitendero,” and stated that they are working with authorities “to collaborate effectively in the investigation.” The majority of Rappi bike couriers work independently and receive a commission for every delivery from the tech platform.

The events of last month involving muggings on bridges and Ciclorutas forced the mayoralty of Enrique Peñalosa to beef up security for cyclists with a strategy that involves two surveillance turns with 170 police patroling different bike paths from 5:00 am until 10:00 pm. After 6:00 pm when many cyclists return home from work, a Hawk helicopter will monitor suspicious activity from the air. The enhanced security measures also include the implementation of 30 “priority points” along the bike paths to guarantee peace of mind for those using eco-friendly transport. The district’s Secretary of Security Jairo García also confirmed that 30 officers assigned to the rapid reaction Delta force will also patrol the bike paths, and with 800 security cameras located on the Ciclorutas cyclists have been assured a safe ride.