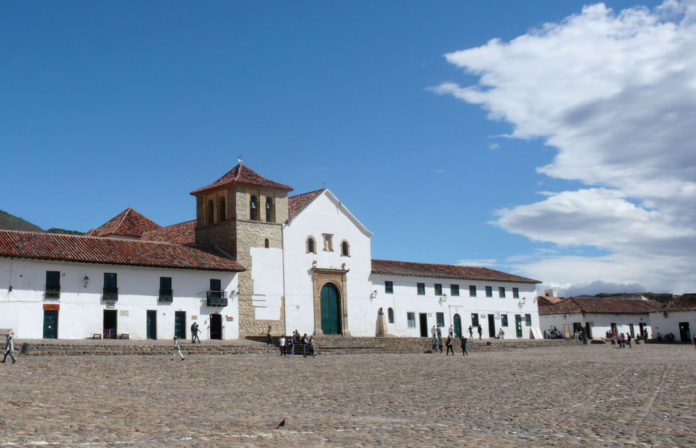 As much as remarkable geography and natural wonders, Colombia’s colonial heritage is part of the fabric of the nation’s society. Nowhere is that more visible than Villa de Leyva, a white-walled city of stone roads with an expansive plaza about three hours northeast of Bogotá.

For those living in the capital and the adjacent department of Boyacá, a weekend getaway can get no better. The old, tranquil town offers little in the way of modern trappings and everything you need to forget the stresses of day-to-day life.

Excellent food and live music. Precious architecture and quaint shops. Outdoor adventures and lazy hours of rest. Villa de Leyva offers it all. Truly one of the can’t-miss locations in Colombia, don’t wait another week before planning your trip.

Plaza, plaza, plaza. It is the showstopper of the town and the largest in Colombia covering 14,000 square-meters, followed by nearby Monguí and the Bogotá’s Plaza de Bolívar. Just sitting on one end — staring off into the distance, watching locals and tourists traverse the imperfect curvature of the stone expanse — is enough entertainment to kill half an afternoon. Meet up with a few friends, bring some wine, or enjoy an empanada. There is nothing quite like doing nothing in this beautiful, real-world time-capsule.

The farmer’s market each Saturday is another beautiful Villa de Leyva tradition. Arrive early to see all the excitement and goods on display. Vendors come from afar with their best offerings. Stock up on fresh-picked food without leaving a hole in your budget.

On Villa de Leyva’s outskirts there are many little diversions. Archeology is a draw, with ancient finds dotting the landscape. See some in the dinosaur park at Centro de Investigaciónes Paleontologicas (CIP) or the Museo del Fósil. Both are reasonably priced and require only a leisurely stroll that won’t take up much time. Casa Terracota, while called The Flintstone House, only dates back a few decades, but its silly appearance can make even the grumpiest adult feel like a kid again.

For more excitement, head to La Periquera Adventure Park for fun on a zipline, waterfall repelling, or “Zorbing” down a hill inside a human hamster ball. For the less intrepid traveler, the park also has an hour-long trail that passes by at least three nice waterfalls. Taking the zipline from the top (for $15,000 pesos) saves you 15 minutes – and adds exhilaration.

Pozos Azules is a better choice for pure nature with less touristy appeal. An easy walk will get you to these small natural pools not far from the main road, and the path is — like everything here — pleasant and enjoyable.

A heartier outing can be had by heading up to the páramo of the Iguaque natural reserve. For this you need to get up early and trek briskly throughout most of the day. But the pretty high-altitude, wet surroundings are worth the extra effort.

One option for a first timer is El Solar de la Guaca. It isn’t itself a restaurant but rather an open-air establishment that combines a menu of six attached eateries. There is something for everyone, with a mix of pizzas, wok-style Asian-fusion dishes, or Colombian tenderloin típicos such as the salt crust lomo al trapo.

While the food is nice, the music is the true sell. On one recent Saturday, musicians played throughout the evening, including Panagua, a two-person group with one man on the acoustic guitar and vocals while the other handled percussion. His instruments ranged from handheld bongos to a wooden box he sat on while pounding away on his makeshift drum-chair. Their third song was a rendition of Colombian classic Un Beso y Una Flor, that turned into a singalong among the 100-plus diners.

For other options, El Patio Andaluz has balcony tables overlooking the plaza that are the best seat in town, Machu Picchu has good Peruvian, and Wok offers a similar, if more subdued, experience as El Solar de la Guaca. Live music is plentiful throughout the town on weekends.

For the ultimate in relaxation, stay at the spa up on the hill. The Duruelo compound dates back to 1970s — but feels like a lived-in hacienda from an earlier century. Rows of rooms populate several free-standing buildings on expansive grounds covered with, quite frankly, an unreasonable invasion of flowers. A few days sleeping in the high-ceilinged white rooms and meandering along the tiled floors is enough to make you feel like a colonial-era baron.

The breakfast buffet, with on-demand eggs to order, unlimited fruit, and a table-full of breads is another highlight. After eating on the terrace, enjoy the amenities at the spa. The pool is modern and inside there is sauna, steam room, jacuzzi, and workout center. Decadent massages cost $100,000 pesos. Facials and other pampering are also available. The whole stay is modern luxury in a building that feels like pre-dates the plane. Various accommodation levels are available, but expect to spend upwards of $300,000 pesos (US$100) per night.

Several middle-tier lodging options in town — including Molinas, Posada Casona, and La Candelaria — come well recommended. For backpackers or those on a tight budget, campsites and cabanas are a short drive from the city center, where there are also hostels.

With no airport nearby, everybody drives. It’s a good three hours from the north edge of Bogotá. Grabbing a bus at Portal del Norte and relying on taxis at your destination is just as easy if you don’t have a car.

Flota Liberadores offers a direct option, twice daily, that can be boarded at the Terminal de Transportes. Flota Valle de Tenza, $23,000 pesos one way, is another option with both smaller, more rustic buses and large Mercedes vans that have comfy leather seats.