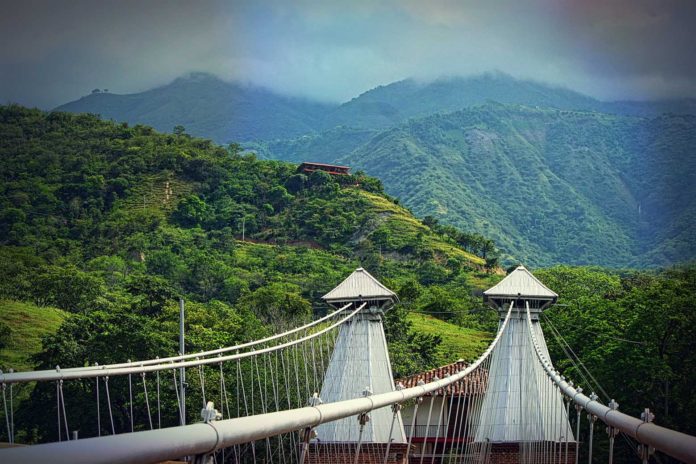 At the final climb to reach one of Colombia’s most well-preserved heritage towns – Santa Fe de Antioquia – a giant fluorescent green iguana gazes out at the highlands from behind a waterslide. What surprises me isn’t finding a reptile so close to the road, but rather, one made from fiberglass to draw attention to the local aquatic theme park Kanaloa. Then again, with Santa Fe de Antioquia nestled in a brush forest, the region clearly is inspired by its local fauna.

Two hours on a “bullet bus” from Medellín’s northern bus terminal Terminales de Transportes del Norte, and you enter the heartland of the 19th century Antioquia colonization, and by the number of luxury 4x4s on the road laden with sacks of food, seems still on-going and pushing speed limits.

Medellín’s urban patchwork becomes undone leaving the Valle de Aburrá, and during the next 80 kilometers on the San Jerónimo road, one can appreciate the many flower farms where, in August, silleteros elaborate their colorful flower tableaux. Thanks to a time-saving tunnel and fast descent to the Cauca River, the verdant green ridges of the western highlands give way to orchards, palms and brute force of nature evidenced by giant smooth boulders. Passing a suspension bridge, a Chiva joins us on the road and announces our imminent arrival in Santa Fe de Antioquia.

Founded in 1541 by Marshall Jorge Robledo, Santa Fe is home to many well-preserved colonial buildings and a pristine central square that rivals others in the department, among them Tamesis, Jardín and Jericó.

It was in the mid 19th century, however, that engineer José María Villa gave the town one of the architectural marvels of the new Republic, Puente de Occidente, designed to unite the Pacific lowlands with the interior. María Villa went on to work on the construction of another landmark: Brooklyn Bridge.

The construction of the Medellín to Urabá highway put the old Santa Fe – Sopetrán road out of commission, and today, Robledo’s bridge stands as a monument to the enterprising spirit of Antioqueños.

Because Santa Fe is an easy day trip from Medellín, join the tourists with a walk across the 291 meters of the old bridge, which offers spectacular views of the Cauca River. On its silent run to join the Magdalena River, the Río Cauca has witnessed every period in Antioquia’s history: from the age of mules and coffee to the industrial revolution powered by coal and steam.

Declared one of Colombia’s 19 Heritage Towns, and known as the Ciudad Madre – Mother City – of Antioquia, Santa Fe’s attractions include five stone churches, the most visited, the white-walled Cathedral perched on a hillock with panoramic views of the Cauca valley.

There are many arts and craft stores in town as well, selling iconic accessories of bygone days, such as the muleteer’s leather carriel, which is still stitched by artisans in another tropical outpost – Jericó.

Tourists have no shortage of hotels, eco-lodges, resorts and rustic haciendas to chose from, most of which include in their portfolios visits to coffee plantations and horseback riding excurisons. A tourist office near the town’s main square, Plaza Mayor, has plenty of maps and tips on how to best maximize your time in Santa Fe, and as Antioqueños are known for their hospitality, chances are you’ll find yourself making new friends over shots of the region’s favorite drink – ‘guaro’ – firewater.

Another important heritage site is the Church of Our Lady of Chiquinquirá, built in a neo-Gothic style and with prison cells for priests who went astray! The Juan Del Corral Museum houses an impressive collection of historical artifacts, and the Archbishop’s Palace is where many of the relics used in the Holy Week processions are kept. If in town between December 22 and 31, join the carnivalesque Little Devils street party, where black masks and red cloaks are the obligatory dress. The Fiesta de los Diablitos is the department’s oldest fiesta, dating back 300 years.

When it comes to food, the bandeja paisa platter is the main draw with its crispy pork rind, minced meat, beans, rice and plantain. For dessert try the town’s sticky specialty: tamarind sweets. From local gastronomy to getting lost on cobblestone streets, Santa Fe is a perfect destination to escape from the fast pace of city life, especially with the end of year holidays around the corner. Or as an Antioqueño would say: El que no se arriesga no cruza el río (He who doesn’t risk, doesn’t cross the river). Referring to the Cauca, clearly.

Buses (SotransUraba) leave every half hour from Terminal Norte and tickets cost $11,000 pesos each way per person. The premium buses include free wifi.