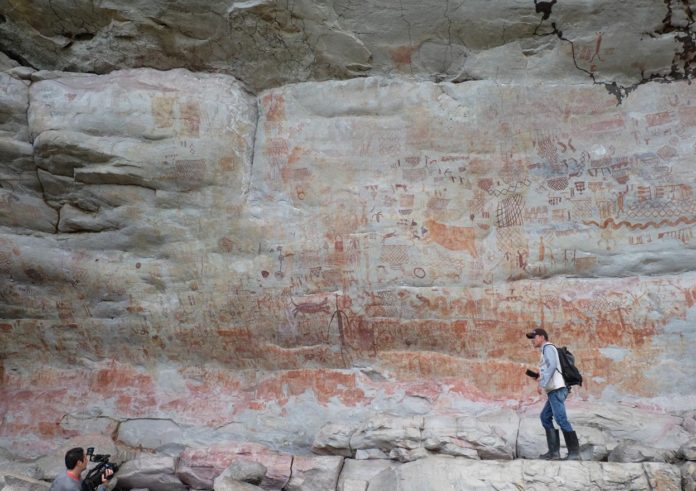 Diego Cifuentes points to the last remaining coca bush in an open field. One of many migrant workers who left his native Venezuela to find work in the jungles of Guaviare, Cifuentes doesn’t want a return to the past when a pound of coca paste from a plantation would fetch $2 million pesos on the open market – of which $500,000 pesos had to be handed over to illegal armed groups in form of a “transportation tax”. Examining the dried leaves of the illegal cash crop, Cifuentes remarks: “There’s barely enough to make a cup of tea now.” The 46-year old subsistance farmer believes that the sooner Guaviare abandons its coca harvest, legal agricultural alternatives could feed all of Colombia. “An hectare of yucca in the Guaviare can produce up to 40 tons a month,” says Cifuentes trundling through the wild grass to inspect another alternative crop to coca. But, the sheaves of corn have all but dried up. “It’s not climate change, but the result of the ‘state’s presence’ in the area,” claims the no nonsense farmer of the aerial fumigation with glyphosate that turned much of this arable field into a dust bowl. “It will take years for corn to come back,” he says.

The Guaviare department in southeastern Colombia encompasses large swathes of Amazon rainforest and Guiana Shield rock formation. It is a frontier region that contrasts with the intensive agro-industry of nearby Meta with its expanse of pineapple and African palm plantations. In Guaviare, the river that gives its name to the department, remains the only way people can move between one community and the next or reach the market in the departmental capital San José. A paved road extending 380 kilometers to Villavicencio and interior of country is one of the impressive infrastructure marvels of the region that until recently few would dare to travel given guerrilla check points. All this seems to have changed, though.

But it is still a three hour boat ride from Cifuentes’ jungle outpost to San José, making as the farmer claims, any possibility of seeing money from the government for crop substitution futile and costly. According to the Final Accord signed between the Colombian Government and Revolutionary Armed Forces of Colombia (FARC) guerrilla in November 2016, the National Program for Illicit Crop Substitution – PNIS – entitles coca farmers to have access to credit and a cash payment of some $36 million pesos (US$12,000) spread out over two years to ensure basic subsistence if they voluntary eradicate their illegal crops. But, the payments have faced serious delays, and according to Cifuentes, for many, the money spent buying gasoline to fuel a boat, plus added expenditures in town, is simply not a good business proposition. So, instead of relying on politicians, he is banking on the pink river dolphins that are seen swimming in a nearby lagoon.

One of the region’s most magnificent species has begun to reel in the first tourists to his corner of the world stigmatized as one of the most dangerous to visit. Even though there are splinter groups of FARC’s mass demobilization that have formed the rank-and-file of “dissidents”, this largely unexplored territory of the Amazonia and Orinoquia has begun to embrace eco-tourism as a sustainable source of income. By offering ecological walks, dolphin spotting and bird watching options to outsiders, Cifuentes has joined a growing chorus of eco-guides. Self-taught in the ways of the jungle and keen to share his knowledge of a mammal that is often sold as a tourism attraction, but rarely seen in the numbers of the Guaviare’s backwaters, men like Cifuentes are opening up their homes to extranjeros.

After a hearty chicken stew and refreshments, Cifuentes invites a handful of bleached-skin tourists to swim with the long-nosed “toninas.” It is late afternoon and Damas del Nare lagoon mirrors an immense blue sky. As white storks dart from the thick canopy of trees the first, of at least seven dolphins, surfaces. Our guide encourages each passenger to gently slip into the placid waters from the edge of the canoe. Within minutes, we are floating in a heightened state of euphoria as dolphins nudge our ankles and squeeze between our legs. Cifuentes’ claim that Damas del Nare is the “Eden of dolphins” is matched by an experience, and even though we are tourism bait, word – at least in our canoe – is out on the wonders of Guaviare.

As night settles on San José, a squadron of mud-caked buggies pull up outside our hotel near the military base. The drivers, who have initiated a weekend rally through this steamy outback, emerge from their rubber capsules in protective clothing. Hardly an image of DEA agents unloading from army gunships which now lay dormant on an airstrip considered one of the most important for anti-narcotics operations in Eastern Colombia.

The advance of FARC during the late 1990s across the Llanos Orientales was commandeered from a cavernous massif at the heart of this country’s largest national park PNN Chiribiquete. This rugged rock formation home, to immense biological diversity and located a few days by river south of San José remains off-limits to outsiders as the terrain is dangerously treacherous. Unless you were a member of the Marxist guerrilla patrolling a web of rivers or guarding the narrow canyons that cut through pre-Cambian rock there were limited possibilities of ever deciphering the immense rock- face galleries painted by a lost civilization. Without FARC as the defacto wardens of the Chiribiquete, illegal miners and timber mills have begun to encroach on this natural wonder, potentially destroying the habitat of the endangered jaguar, and unseen antiquity. If preliminary research turns out to be correct, visitors to Guaviare can at least appreciate 10,000-year old pictographs on an escarpment overlooking Nuevo Tolima, a corregimiento one–hour from San José.

Swerving potholes on the road to Nuevo Tolima, my coordinates remind me that I am in what was once rebel-held territory. Even though the names of places that dot the landscape of western Guaviare are increasingly becoming synonymous with adventure tourism, for those who remember this country’s recent past, FARC handed- over many hostages in these grassy knolls as part of a “prisoner of war” exchange with the Colombian government. A few kilometers past Nuevo Tolima, a dairy farmer offers to be my guide to reach the mysterious patterns. After climbing a steep ravine, hoisting myself up a narrow ladder, I arrive within a full view of an ancient masterpiece. Surrounded by illustrations of anacondas, bats and tapirs, the artist who documented his universe seems ever-present, and his motifs protected as a fragile Guaviare crosses its own threshold from conflict-ridden past to a future of peace.