From the Caribbean to the Andes to the Amazon, Colombia is full of beautiful locations. Some of the most charming are the small towns located all across the country. The following four pueblos are some of the very best to visit on your next relaxing weekend away from the traffic and chaos of the big cities.

Known as the “City of Bridges,” Honda is a medium-sized town nestled four hours from Bogotá on the banks of the Magdalena River. The last navigable port along Colombia’s majestic river before the it narrows and becomes too shallow for boats, Honda can get as hot as Cartagena.

As an important transportation hub during much of the 19th century with goods arriving from Europe, the pueblo’s past is linked to the sea. Before artists decided this was an ideal place to paint, mules connected this riverine port with the capital. Hence, the town is home to a museum of maritime objects, botany, and a colonial enclave of narrow cobble stone streets.

Enjoy the many views of the Eastern Cordillera from the five bridges that connect this town in Tolima with the department of Cundinamarca. With an average temperature of 30 degrees celsius, take sunscreen and light clothing.

Every year, the small town of Ríosucio in Caldas wards off evil spirits by setting fire to devil, or rather, a giant red effigy with fangs and horns. The “Devil’s Carnival” is one of Colombia’s most bizarre events. On January 6 the entire plaza literally goes up in flames with a bonfire dance fueled by firewater and celebration that winds its way into the early morning hours before peace and tranquillity settle in.

Like all towns across the Viejo Caldas, the region’s typical dish — bandeja paisa — is served up in restaurants that grace the main square. And as you are at the heart of the Coffee Axis, you can also be guaranteed a coffee that was picked, harvested and roasted in the hills behind town.

When it comes to the “most beautiful” list of Colombian towns, Monguí gets tops honors for both its natural setting and impressive main square that extends towards a horizon of Boyacá green. Built by stone that was hauled from quarries along the coast during the Spanish conquest, Monguí was designed to be an imposing outpost in the New World, with one of the largest plazas rivaling those of Cartagena and Quito.

Given its location in the high Andes, the town has preserved much of its colonial splendor. One can reach Monguí by bus from Sogamoso, a four-hour excursion from Bogotá. Enjoy typical soups and an arepa boyancese while heading from the main square to a cold stream that descends from the nearby páramo. It’s always chilly in Monguí, so pack a sweater.

If you’ve done your research on Colombia, then the name Barichara may be familiar. One of Colombia’s best preserved colonial towns is home to weavers and stone carvers, and given the many activities in the Guanentá region, local restaurants and boutique hotels are thriving in Barichara — some even welcome guests with bowls of fried fat-bottom ants. The hormiga culona is a local delicacy on par with other regional dishes, such as carne horneada (cured meat) and spit-roasted mutton.

A seven-hour overland trip from Bogotá makes Barichara a long-weekend favorite. As the town hosts several festivals throughout the year, that courtyard pool can get busy and a room with a view becomes scarce. Perched on an arid plateau, there are trails leading to Suárez River – one of this country’s more turbulent waterways and recommended only for experienced rafters. 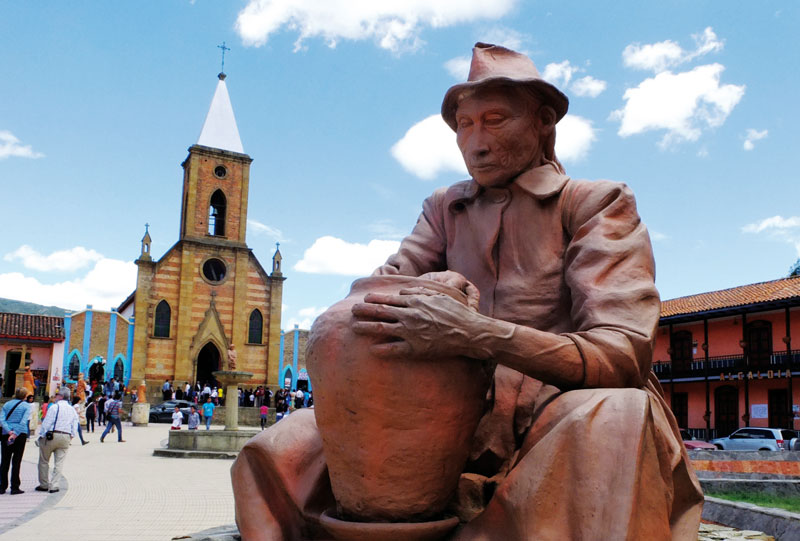