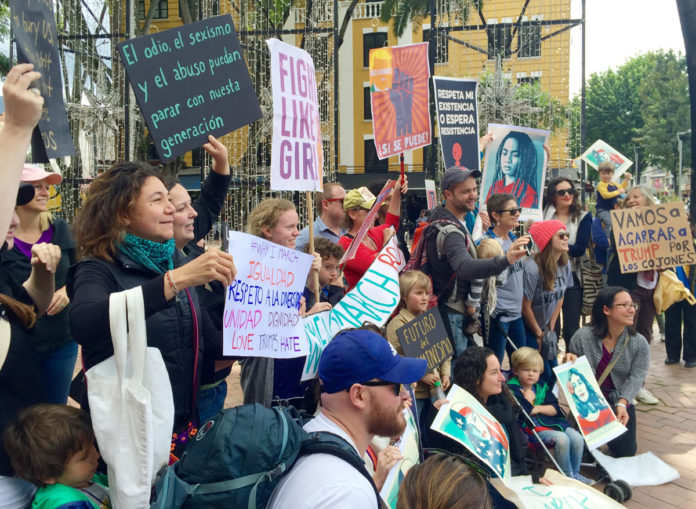 It was 1:30pm on Saturday, January 21th, the day after Donald Trump took the oath of office as president of my country. The Women’s March that was gathering momentum around the world was supposed to have started half an hour ago, here in Bogotá. Some one hundred persons – 150 at the peak of the march – gathered in a square near the Parque El Virrey in Bogotá’s Chico neighborhood and were ready to stand up for women’s rights and speak out against Trump’s policies. But at that moment we were confused. Who was leading this march? No one was stepping up to start it. Then, two women took a risk and yelled: “Okay, we’re marching in the park! Let’s go!”

We cheered, relieved that two brave ladies had taken the initiative. If not for them, we might have waited all day. We were all excited to march in solidarity with the Women’s March on Washington, where 750,000 people (and some 3 million across the United States alone) would raise their voices for justice and equality. The march on Saturday in cities across the world was history in the making, as men and women, marched for all the important matters: reproductive rights, equal pay, affordable health care, and action to curb climate change.

With banners and posters in hand, our diverse group headed into the Virrey park and a beautiful, sunny day made the mood all that much joyful. In Washington, however, it was cold and a grey winter day.

We held our signs high, young children and older citizens alike. …But not many people were chanting. I’d never led a chant before. But, I knew that making our voices heard was important. My friend, Jen and I started belting out. Soon, the park rang out with “Derechos para todos!” “Climate change is real!,” “Women’s rights are human rights!” and “We won’t give up, we won’t give in!.” Others began to chime in and start their own chants. Many strolling Bogotá’s Carrera 15 near the Calle 90 turned to watch, take photos and applaud.

For many it was the first time participating in a march. A young British man stumbled upon the crowd and asked me what was happening. After a minute of conversation, he was suddenly helping me hold up my sign! He even started his own popular chant! It was inspiring to raise voices together as a unified group – from all races, genders and nationalities.

When we finished one lap around the park, once again we were leader-less. What to do? I and several others knew: “Let’s do another lap around the park!” And once we finished that: “One last lap!” By our third lap, several marchers had left with their children, but a new crop of fresh protesters and signs appeared – and we had our most exuberant lap yet!

After the march, we realized that there was also no sign-up sheet to stay in contact. In a flash of quick thinking, Jen and I decided to use our poster signs as makeshift email sign-up sheets! That way, Bogotá citizens could continue to take action together against Trump’s policies. With our posters filled with dozens of email addresses, we knew we’d done well. And we’d done it all without a “leader.”

Then, the truth hit me. As a woman and target of Trump’s dangerous, hateful policies, I don’t have a country leader to trust in, anymore. But I do have myself. And many others. Just like we took a risk and helped lead the Bogotá Women’s March, it’s our job to do the same in America – and wherever there is injustice. If you see a need, don’t wait for someone else – do something.

It’s up to us, people of all colors, genders and from every walk of life to take a risk, shout out, and encourage others to join in. There will be more marches in the future so get creative (just like the poster sign-up!) to stand for what’s right. I was so empowered on Saturday, and I hope others were too. If you are wondering how to continue the action for justice, you can visit these websites: indivisibleguide.com or wall-of-us.org.

Several people asked me, afterward, if I was a founder of the march. I laughed and said no. Who would have guessed that me, a Minnesotan teacher in Cali, would help lead the truly empowering Women’s March in Bogotá?