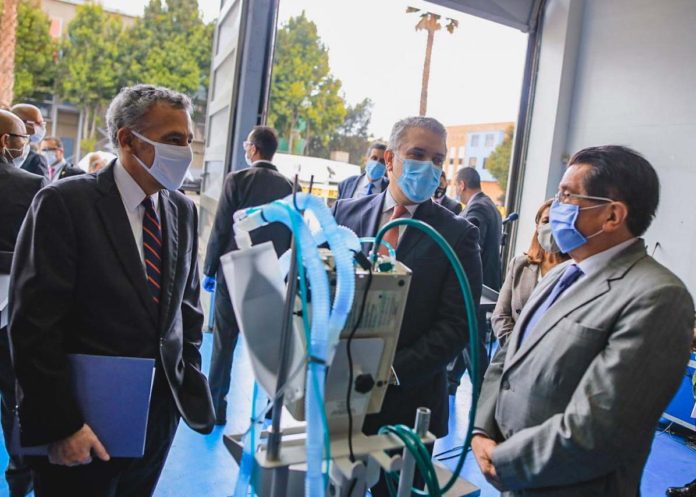 A day after Colombia received a shipment of ventilators to alleviate the precarious situation of the country’s intensive care capacity, and 305 destined to Bogotá’s Mayor Claudia López, the United States Government represented by Ambassador Philip Goldberg and USAID’s Lawrence Sacks handed-over to President Iván Duque, 200 US manufactured ventilators as a donation to support Colombia in the fight against coronavirus.

Accompanied by Minister of Health Fernando Ruíz and COVID-19 Emergency Manager Luis Guillermo Plata, President Duque emphasized the “fraternal  relationship” that exists between both nations, and one based on “common goals and principles.” The donation comes at a critical moment as the country reached 102,009 cases of coronavirus, including 4,163 on Wednesday.

“These 200 ventilators will have a great impact on the territories,” he said. Ambassador Goldberg affirmed that the delivery is a “pledge made by President Donald Trump to support Colombia,” as well as US$8.5 million announced in April when total confirmed cases were less than 300. Many of the ventilators are headed to intensive care wards treating vulnerable populations along Colombia’s Pacific coast.

Despite having surpassed a 100,000 benchmark, active cases are at 54,941 and Wednesday saw 1,334 patients of coronavirus recover. The country also confirmed 136 additional fatalities, putting the death toll at 3,470. In Bogotá, 19 deaths were registered while high mortality rates continue to affect the country’s coastal cities.

After a sharp lowering in infections in Bogotá on Tuesday, the capital added 1,339 cases to the national tally, followed by the departments of Valle del Cauca with 534, Altántico with 479 and Barranquilla with 372. According to the National Institute of Health, 18,054 PCR tests were processed.