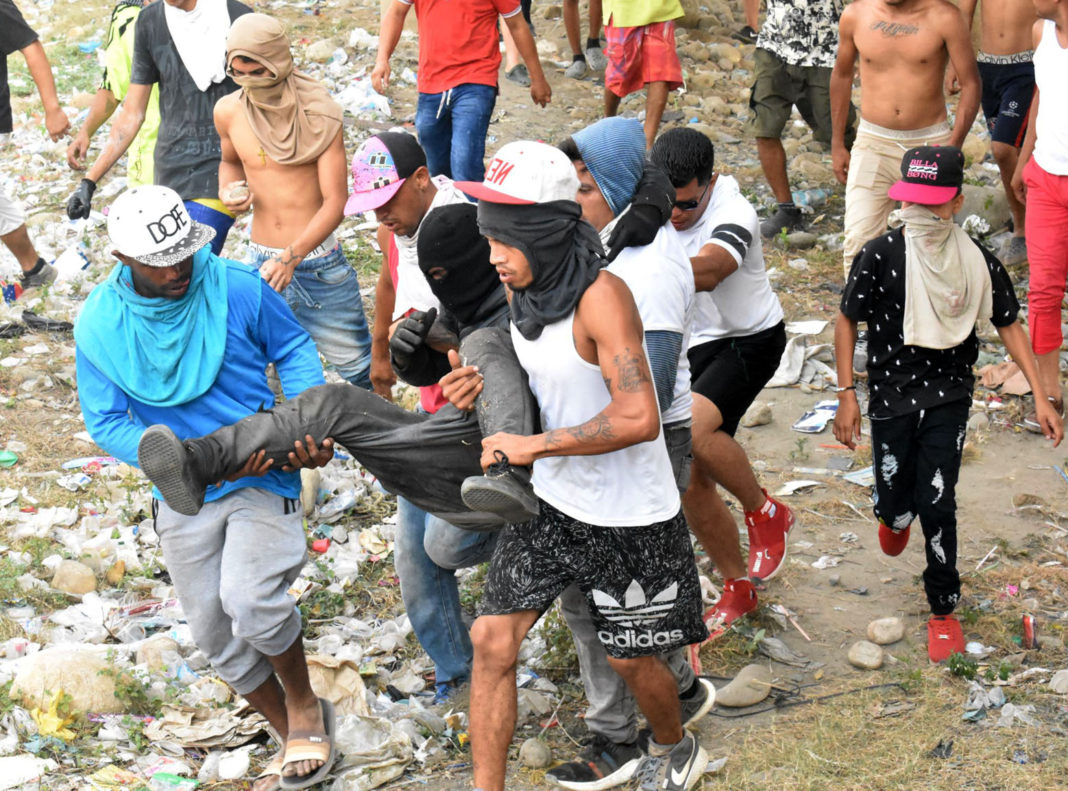 (Cúcuta) – The frontier is suffering convulsions following a violent weekend. The border is closed. And thousands of Venezuelans remain stranded in Colombia. It’s too dangerous for them to cross over to their homeland illegally through guerilla-controlled areas in Colombia and Maduro’s paramilitary forces, known as Colectivos attacking anyone who approaches the border. There are running-skirmishes as frustrated young Venezuelans battle these Cuban-trained collectives and Venezuelan police.

The Simón Bolívar Bridge near Cúcuta was closed after the riots and failed attempt to deliver humanitarian aid on Saturday. But, below the bridge crowds watched as two groups of young men braved tear-gas and bullets. They threw rocks at Venezuelan forces atop the bridge, hiding behind cement columns. A second group scaled the bridge on a rope to salvage the smoldering remains of a destroyed aid truck for parts.

Three protestors were wounded when the Venezuelan Army opened fire with anti-riot weapons, one critically.

Saúl, who lives right across the border in San Antonio told The City Paper: “No. I can’t cross now. But my family knows I’m safe. The internet is shut off in San Antonio, but they can sometimes get the signal from here in Colombia so I was able to send a message through WhatsApp. I think maybe Tuesday or Wednesday I might try to cross further off into the wilderness. For now, the Colectivos are too active. No one in San Antonio is leaving their houses. It’s too dangerous to even be on the streets.”

He had a large bruise under his right eye from the riots the day before. “I was hit by a rubber bullet. I think it was a ricochet because otherwise I probably would have lost my eye. But luckily it didn’t break the skin.”

Joseph, a Colombian police officer watched the running melee from the foot of the bridge. He asked that I not use his last name and made it clear he was only speaking his personal opinion when he told me. “This has to stop. We don’t even know how many were wounded yesterday. And imagine it, imagine all those wounded on the Venezuelan side. There are no functioning hospitals there. Without a doubt, people that could have been saved were dying as badly-needed medicine burned on the bridge.”

“I don’t know what’s going to happen. I’m just here to protect the people on our side of the border. We have infiltrators from the Colectivos here trying to instigate more riots, more violence. At this point honestly, I just hope the U.S intervenes. I don’t see another solution. Maduro isn’t going to accept a peaceful compromise.”

David Parra and Gabriela Rojo, two Venezuelan journalists from the Caracas Chronicles were also trapped in Cúcuta after traveling to report on the events of the weekend.

“It’s too dangerous to cross by land right now. But flights are crazy expensive. I make about US$300 dollars a month as a journalist, and right now flights from Bogotá to Caracas are US$500. The Colectivos are out in force all along the border. They are stopping people from trying to enter, claiming that they are spies or infiltrators. They are intimidating the people in the towns.”

She played me a voicemail message from her sister-in-law. In a sobbing voice, she described the conditions in San Cristóbal. “I don’t know what to do! The Colectivos are everywhere. They shot someone today. We are afraid to even leave the house. We want to come to Caracas and stay with you when you get back. But we are afraid to travel. We are terrified! What should we do?”

David adds “I’m going to wait here in Cúcuta a few days until things calm down. Then I think I’m going to cross illegally. It’s too dangerous near the cities right now. But if I can get to San Cristóbal, I will just take a bus home. I’m going to leave my phone and computer with Gabbie, only taking enough cash for the journey and hope for the best.”

We spoke with one of the youths under the bridge. His face was covered by a T-shirt and he declined to give his name. “No way. If those guys that are shooting at us know my name, they’re going to go to my house and have a talk with my family. Maybe kill one of them just to send a message. I’m staying here. I’ve had two friends shot by those sons of bitches.”

He then gave me a thumbs-up and ran back into the melee.

About twenty minutes later one of the young men on the bridge was shot, and fell onto the rocks below. His companions carried him to an ambulance at the nearby police station.

“Someone should stop these kids. There’s an organization here in the neighborhood giving them bread and juice. They don’t mean badly, they’re just trying to support the cause. But this has no point. There’s no objective. These kids are being shot before our eyes. I’m going to go have a talk with them, tell them that they should tell these kids to stay on the Colombian side. But the truth is, I don’t think these kids are going to listen. Their blood is running hot right now.”

Suddenly cheers erupted from the crowd. A Venezuelan police officer and his drug sniffer dog, escorted by Colombian police, emerged from the smoking and burnt fauna near the bridge. We later learned that he had defected.

“It’s the first canine defection!” a young protestor told me. “You know things are bad when even the dogs are running away!” he said, laughing.

No one knows how long Maduro will keep the border closed. Meanwhile, thousands remain stranded on both sides of the border. Villa Rosario, the municipality of the Simón Bolívar bridge is a ghost town. The usually bustling and chaotic point-of-entry into Colombia now hosts only closed shops and waiting Venezuelans.

Joshua Collins is an independent journalist based in Cúcuta. 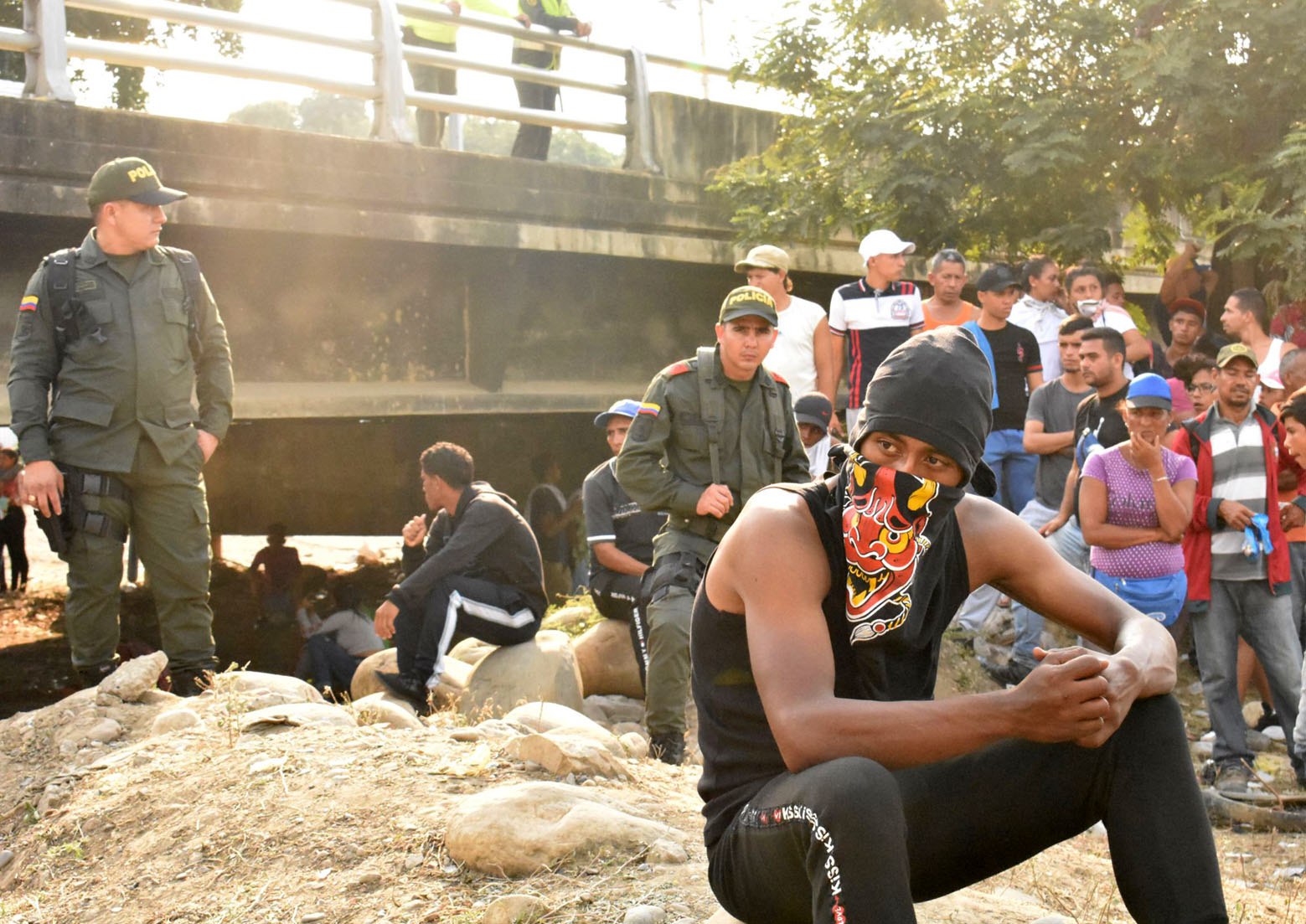 Implementation of peace accord with FARC faces hurdles in 2017