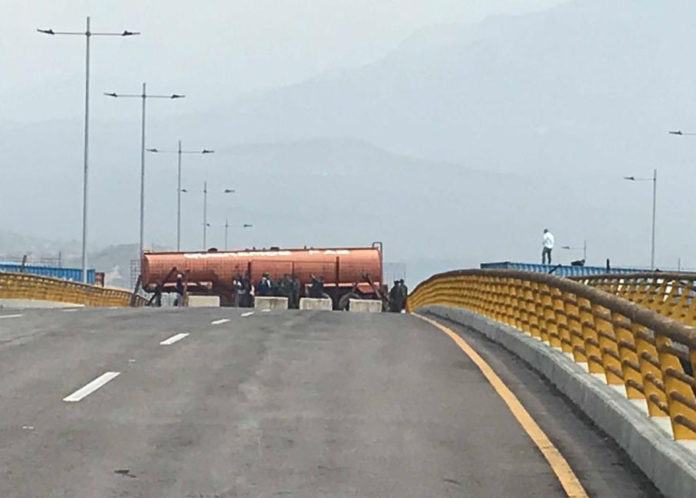 February 23rd was a day that held the promise of a nation in its hand. The promise of liberty, justice and freedom, and the potential emancipation from a dictatorial regime that has overshadowed Venezuela since Nicolás Maduro clinched power in 2013.

The previous day had seen Latin America’s pop royalty take to a stage, that was built on a bridge that currently divides two nations in more than just the physical sense. Putting the Venezuela Aid Live concert on the Tienditas bridge was much more than just a symbolic gesture to the thousands of Venezuelans that waited on the Colombian border for it to be reopened on Saturday, by the self-declared interim President Juan Guaidó. It held the promise of returning home, to see family and loved ones for the first time in months, or in some cases, years. It promised salvation.

And so, as a bright sun rose over what would be the day that could change the fate of a nation Juan Guaidó and Colombian President Iván Duque arrived at the Tienditas bridge, and in front of a throng of international and local press promised that today they would reopen the border crossing. and deliver tons of much needed humanitarian aid in nine trucks filled with medicines, personal hygiene products, and food into Venezuela.

“Everyone on both sides of the border is working very hard to make sure the aid is delivered” said Guaidó before turning to the waiting convoy of truck drivers and shouting “Let’s go!”.

In response the truck drivers enthusiastically revved their engines and sounded their horns, and the world’s media made their way onto the bridge to record a historical moment that would open the way to a new Venezuelan democracy, and deliver much-needed supplies to a country where, according to Guiadó, over 300,000 of his citizens will starve, especially children if they don’t get help soon.

“Venezuela, the day has arrived in which we will take the step to enter humanitarian aid. From our borders, by land and sea, we will bring hope, food, and medicines for the ones who need it the most,” Guaidó tweeted Saturday. “We call everyone to go out massively to the streets in the whole country, to protest peacefully at barracks, to urge the Armed Forces to let aid in.”

And so the growing crowd of over two thousand Venezuelan refugees and immigrants waited for the moment the convoy would begin its journey, and still they waited, and the sun continued to rise. But the trucks did not come.

Slowly the sound of the horns and engines faded away, as the distant thumping beats of Maduro’s “Hands off Venezuela” could be heard wafting across from from the other side of the bridge, where it was reported that thousands of Venezuelans loyal to Guaidó had gathered ready to meet their fellow compatriots, estranged by a migration crisis that has resulted in over three million exiled across the hemisphere.

Twenty minutes north of Tienditas, on the Simón Bolívar bridge, and further up on the Santander bridge (two other border crossings near Cúcuta closed by Maduro on Friday) a very different story was unfolding. As aid trucks tried to enter into Venezuela in the early morning, they were met with heavy resistance from Maduro’s fiercely loyal army, firing upon fellow Venezuelans and volunteer aid workers, with tear gas and setting fire to two convoy trucks.

Meanwhile, at the border crossing of Brazil, four people were killed as aid trucks began to enter Venezuela through an Amazonian outpost. At least two of the trucks reportedly made it across, with the first arriving at the city of Pacaraima around midday Saturday.

In light of the violent clashes on all the other border entry points, at 1:30pm Guaidó, President Duque, President Piñera of Chile and the Secretary-General of the Organization of American States (OAS) held a press conference inside the aid warehouse of Tienditas to announce that they were canceling the proposed border crossing and delivery of humanitarian aid.

As news spread to the thousands of Venezuelans who had been waiting since dawn at the emotions reached tipping-point. “No tenemos miedo” (We are not scared) and “sí se puede” (Yes we can) they chanted, as a large group began to move towards the bridge with the intention of breaking through the metal barricades, with or without the help of the Colombian police and volunteer aid workers. A tense stand-off occurred as the Colombian National police formed a line holding truncheons together to prevent the frustrated migrants from moving forward, and aid workers and volunteers argued for calm.

In an emotional outburst, Venezuelan citizen Edgar Miños screamed: “What I ask of you is from my heart, I give thanks to Colombia’s security forces, because they have been with us, with the world, but we are tired of burying our relatives. I have just lost my mother who went [through] four hospitals in Caracas but died of kidney failure. Tow months ago my father died and I have also been sick for two months and require dialysis! Let the world know this, this is all we ask for. Nobody tells us anything, even though over there they ar having high level meetings” [he points towards the Colombian immigration post where Duque and Guaidó have been holding meetings al day]. “We are tired. We have lost families. Is it worth living in a country, where every day children die of malnutrition? Is it worth living in a country where we don’t have medicine?”

As Edgar vented his anger and desperation at not being able to return to his country, another compatriot explained the predicament of having arrived at one of the bridges only to be shot at with tear gas.  “A lot of us came here with just a bus ticket, I was fortunate to get some food. They weaken us by sending us to march across different bridges. They should have sent us to just one bridge. We are still ready to cross over!”

Tensions were finally used when a lead aid worker took to the microphone and implored the crowd to disperse. “We have to respect the decision of our president Guaidó and to not fight against the Colombian police, who are our brothers. Too much blood has already been shed in one day. If we go across now, what does it achieve? They (the Venezuelan Army) will kill us all. Then we’ll never see our families.”

Sadness, disappointment and anger were clearly visible throughout the crowd. After the high celebrations of the previous day, which infused so much hope, as musical celebrity after musical celebrity took to the stage to say “We are with you Venezuela!” and  “Tomorrow we will cross this bridge together” and the promises of Duque and Guaidó early in the day, it was evident that hope had turned to despair and disbelief.

Whilst many members of the crowd began to disperse and return to wherever they would call home for the night (many thousands of the refugees have been sleeping rough on the border for days) other groups of men and women were clearly not ready to give up yet shouted  “Vamos al otro puente” (Let’s go to the other bridge) and began marching towards the Simón Bolívar bridge, losing the momentum that had been build over the previous days and ready to try and force their way past the Venezuelan security forces and militia.

Now, the future for the Venezuelans on the Colombian side of the border remains more uncertain now than ever, as Maduro cut off all diplomatic ties with Colombia, Brazil and Chile on Saturday, ordering all Colombian diplomats to leave the country within 24 hours.

For those who braved the barricades of the four bridges and acted as human shields ready to embrace their brothers and sisters of the Venezuelan security forces with open arms it now remains to be seen what will happen in the coming days, weeks and months. For many in the crowd at the Tienditas Bridge it feels like there may never be an end to their suffering. Today was a day that promised so much, but ultimately ended in disappointment and bloodshed. A sadly all too familiar story for a country that has been left to suffer in the shadows for all too long. 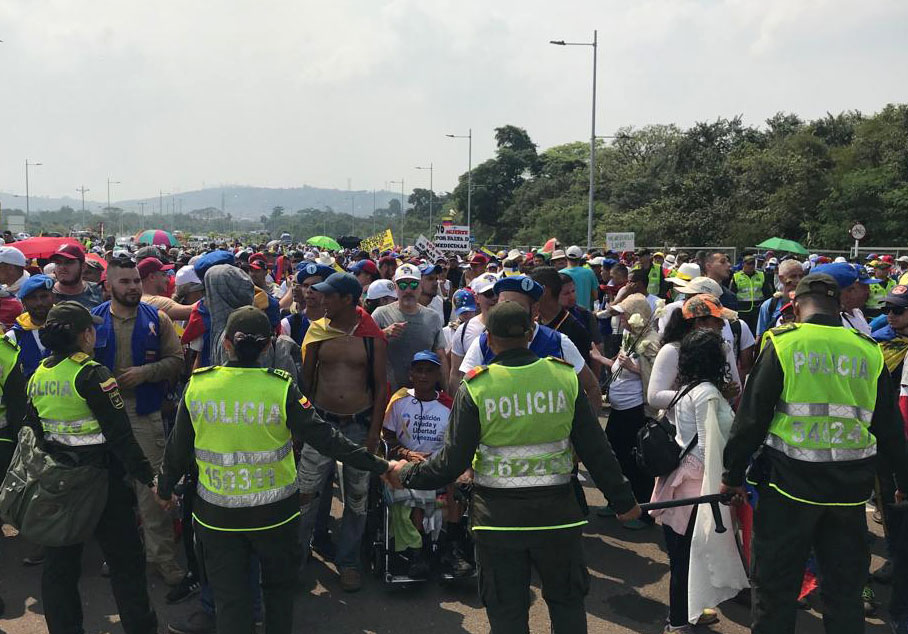