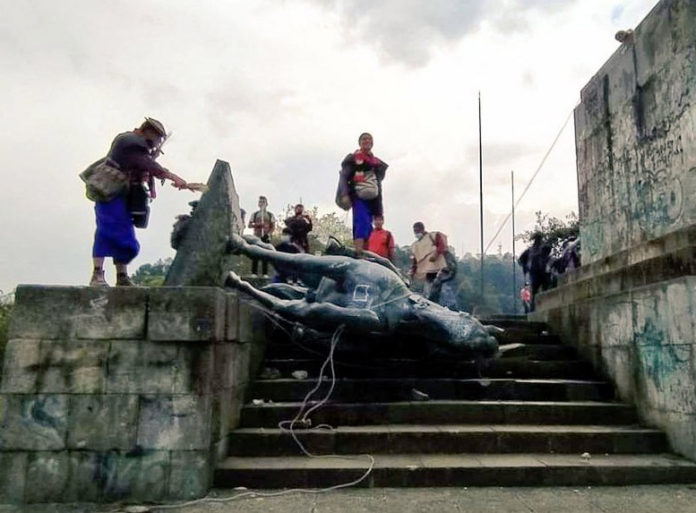 Iconoclasm has gone global, or at least, it reached Colombia on Wednesday when members of the Misak indigenous peoples decided to usurp the 500-year old conquistador Sebastián de Belalcázar, founder of Popayán and the first governor of the colonial city.

Known as the “White City” for its monochromatic streets framed by the agricultural heartland of the department of Cauca, Popayán, is a bastion of staunch Catholic traditions and families who can trace their lineage back to the Spainish conquest and New Grenadian colonizers who settled the ancestral lands of the Guambia, Nasa, Inga and Misak.

The equestrian conquistador crowned El Morro de Tulcán, a conical hillock with scenic views of the historic city and popular with locals for strolling grounds the Misak people claim is an ancient burial site. Cast in bronze by the Spanish sculptor Victorio Mocho, and whose other monument to Sebastian de Belalcázar looms over Cali, capital of Valle del Cauca, the statue was inaugurated in 1936 – and since then – one of the most visited attractions of a city known for its solemn Easter Week processions.

According to Luis Kankui, member of the National Indigenous Organization (ONIC), “what happened in Popayán, where the Misak People demolished the statue of the genocidal Sebastián de Belalcázar is an act of recognition, it is a courageous act for the dignity and decolonization of thought.” Other indigenous groups celebrated the felling of the statute, among them Wayúu representative Martha Peralta who stated on Twitter, that the act “is their way of claiming the memory of ancestors murdered and enslaved by elites.”

Popayán’s Mayor Juan Carlos López considered the act as vandalism of public property, and that Belalcázar will be reinstated at the top of the hill. “We need reconciliation, to work together and understand that the many different cultures that live in Cauca. Here, there are not only indigenous, but also mestizo and Afro,” he added.

After a security council meeting, López confirmed a $5 million peso (US$1,400) reward for information leading to the identification of those behind the destruction of cultural patrimony. The reward sparked outrage with the representatives of ORIVAC (Organization of Indigenous Peoples of Valle del Cauca). “They will have to prosecute two million indigenous people! The state recognizes and protects the ethnic and cultural diversity of Colombia? With what authority does the immoral police threaten us?”

From slave traders to seafarers, independence leaders and colonialists, monuments have become lighting-rods of racial and social discontent. While Belalcázar was hardly a benevolent historical figure, one group’s “act of liberation” is another’s historical white-wash.