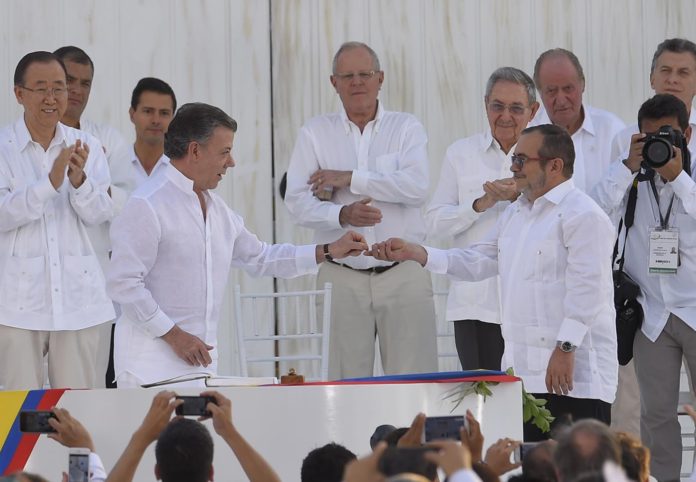 “I ask forgiveness to all Colombians for the pain we have caused in this war,” said Londoño to the thousands of guests at the ceremony and the millions at home and around the world watching the live broadcast. Londoño’s act of contrition was received by a round of applause and standing ovation, many waving the tri-color Colombian flag.

Once the heads of state took their seats on the stage, a minute of silence fell over the Convention Center to remember the 260,000 who lost their lives in the war.

Former Colombian Presidents Álvaro Uribe Vélez and Andrés Pastrana were absent. But former Presidents César Gaviria and Ernesto Samper were in attendance, along with at least 250 victims of the armed conflict.

The opening ceremony began with a woeful chant by Afro-Colombian women from the hamlet of Bojayá, Chocó, that witnessed a horrific massacre by FARC in 2002 that left 119 dead.

When the chant to peace ended, Londoño walked up to a centerpiece table draped in white and signed the Final Accord with the “balígrafo” — a specially made for the occasion pen inside a .50-calibre bullet casing engraved with the words: “Bullets have marked our past, peace marks our future.”

Then it was President Santos’ turn to sign the leather hardcover version of the 297-page Final Accord. With two signatures basking under the Caribbean sun and a handshake from former adversaries, the end of a 52-year-long conflict with FARC was sealed.

Ban-Ki Moon was first to address the audience, many of whom were dressed in the symbolic white. “I am deeply moved to see so many thousands of Colombians here today,” he said. “I am honored to celebrate your achievement — and that of countless Colombians who never lost the hope in peace.”

“When I first visited Colombia five years ago, the adoption of the victims’ law had begun to build the foundations for peace. You had a vision to bring the victims to the forefront. What they have lost can never be restored. Yet victims have been among the most forceful voices for peace and reconciliation — and against the bitterness and hatred. Their example should be an inspiration for all.”

The secretary general commended both negotiating teams for taking responsibility for tragic events of the conflict. “I welcome the commitments you have made to ensure truth, justice, and reparations for all victims,” he said. “This is how all healing begins.” And reminding the international community that, “since the ceasefire has been in effect, violence in the country has been reduced significantly. Lives have already been saved.”

Londoño’s 20-minute speech recounted the FARC’s origins in Marquetalia, and the senior commander addressed Colombians, saying that, “I hope Colombians will be able to live in dignity and peace for centuries to come.”

He recited words from Colombia’s literary great, Nobel Laureate Gabriel García Marquez, who found inspiration within the walls of the colonial port of Cartagena. “This is new era of reconciliation and peace,” he said. He recalled the struggle for social justice of FARC’s deceased commanders Manuel Marulanda, alias “Sure Shot,” and “Alfonso Cano.”

Londoño reminded Colombians that “there is no doubt that we are heading to “politics without weapons” and clamored for peace in Syria and across the Middle East. “Colombia’s peace process can be a reference for peace around the world,” he said. The former guerrilla then went on thank Venezuela’s Nicolás Maduro and Chile’s Michelle Bachelet, who represented the guarantor nations during the negotiations in Havana, for helping to seal this lasting peace and “a victory for all Colombians.”

After the momentous “mea culpa” from the leader of the 13,000-strong FARC, alias “Timochenko” used his time on stage — the first open public address to the Colombian people by a FARC high commander — to both stress his organization’s commitment to its ideals as well as its willingness to change its tactics. “No one here has renounced their ideals, and we’ll continue our struggle in the political arena without violence.”

Then President Santos took the stage to address his fellow citizens. His message, that he prefers, “an imperfect peace” to ” a perfect war,” set the tone for an emotional 20-minute speech in which the president lauded Colombia’s soldiers and police “for their sacrifice, their courage” and recalled millions of innocent victims, human rights defenders, and indigenous community members who bore the brunt of the internal violence.

Santos was emphatic and received waves of applause as the last light of an historic day cast hues of golden light across Cartagena Bay. “This is the cry of Colombia! This is the decision of Colombia!” he said.

As darkness fell over the clock tower of the Old City, the National Symphony Orchestra, under the baton of French conductor Olivier Grangean, performed Beethoven’s triumphant “Ode to joy.”