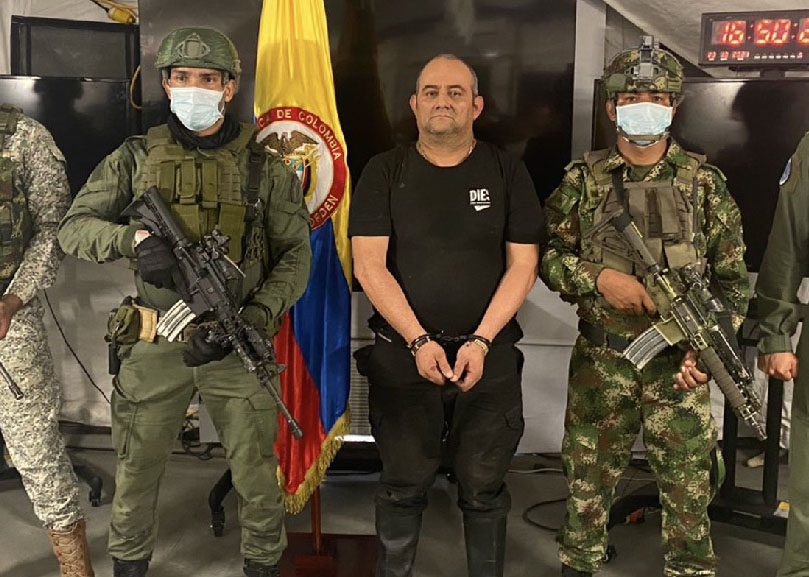 The capture on Saturday of Dario Antonio Úsuga ends one of the longest manhunts for a cartel kingpin in recent Colombian history.

The arrest of alias Otoniel, head of the “Gulf Clan” during a military operation involving the National Police culminates more than five years in which security forces scoured Colombia’s northwest coastal regions for the whereabouts of a drug trafficker with a US$5 million reward. At the heart of a region from which the cartel takes its name, the Urabá Gulf, Otoniel’s capture was celebrated by President Iván Duque as the “hardest blow against drug trafficking this millennium, only comparable to the fall of Pablo Escobar.”

The 500-strong force, headed by commandos from the Special Operations Task Force, located Otoniel in the rural township of La Pita, close to the port of Turbo, where the Colombian Navy had been placed on alert to respond to any possibility the drug lord may escape an air assault involving 22 helicopters. “We studied every aspect of how and where he moved, making increasing mistakes, which helped us,” stated General Luis Fernando Navarro, commander of the Armed Forces. “He (Dario Úsuga) never managed to leave the area.”

According to authorities, the former guerrilla-turned-paramilitary did not use a cellphone, nor did he feel safe sleeping inside houses, moving constantly among base camps located in the mangroves and dense rainforest of the Darien Gap. During the operation, one police officer was killed. The country’s police chief General Jorge Vargas confirmed that intelligence agents from the U.S and U.K contributed to mapping the final movements of Otoniel.

Considered “the world’s most dangerous drug lord,” and included in the top-10 list of the Most Wanted, Otoniel had 122 capture warrants to his name and now faces swift extradition to the United States on drug trafficking charges. Otoniel was moved out of the region shortly after the raid to a bunker at the Attorney General’s headquarters in the Colombian capital Bogotá. The 50-year-old cartel boss oversaw an organization with some 3,800 members, and that moved more than 100 tonnes of cocaine over the last decade.

Úsuga was first indicted by the U.S on drugs trafficking charges in 2009, with additional charges filed  in New York and Miami in 2015. The extradition process can last between eight months and two years given Colombia’s Supreme Court must approve the request by U.S Federal authorities. Otoniel’s capture came days after an official visit to Colombia by U.S Secretary of State Antony Blinken in which the senior diplomat recognized his country’s role in rising demand for illegal substances.

During a series of high-level talks, Antony Blinken and President Iván Duque discussed the drug erradiction and jointly pledged greater cooperation. “Investing in substance abuse prevention, treatment, recovery, will not only help those struggling with addiction, but also reduce the demand of the United States, which is fueling so much criminal activity,” stated Blinken.

President Iván Duque presented Otoniel as a trophy in the war on drugs, posting the kingpin’s mugshot on Twitter, and accompanied with a warning: “Prison is the only road that awaits delinquents, as no one is above the law or Constitution.” The Gulf Clan’s security apparatus, known as the “Urabeños” or “Autodefensas Gaítanistas” took over drug trafficking routes in the departments of Antioquia and Chocó with the demobilization of the FARC guerrilla in 2017.

Dario Úsuga rose through the ranks of Carlos Castaño’s AUC (United Self Defense Forces) as a third-tier commander.

Ex-FARC and AUC leaders meet to “respond to victims” of Colombia’s...