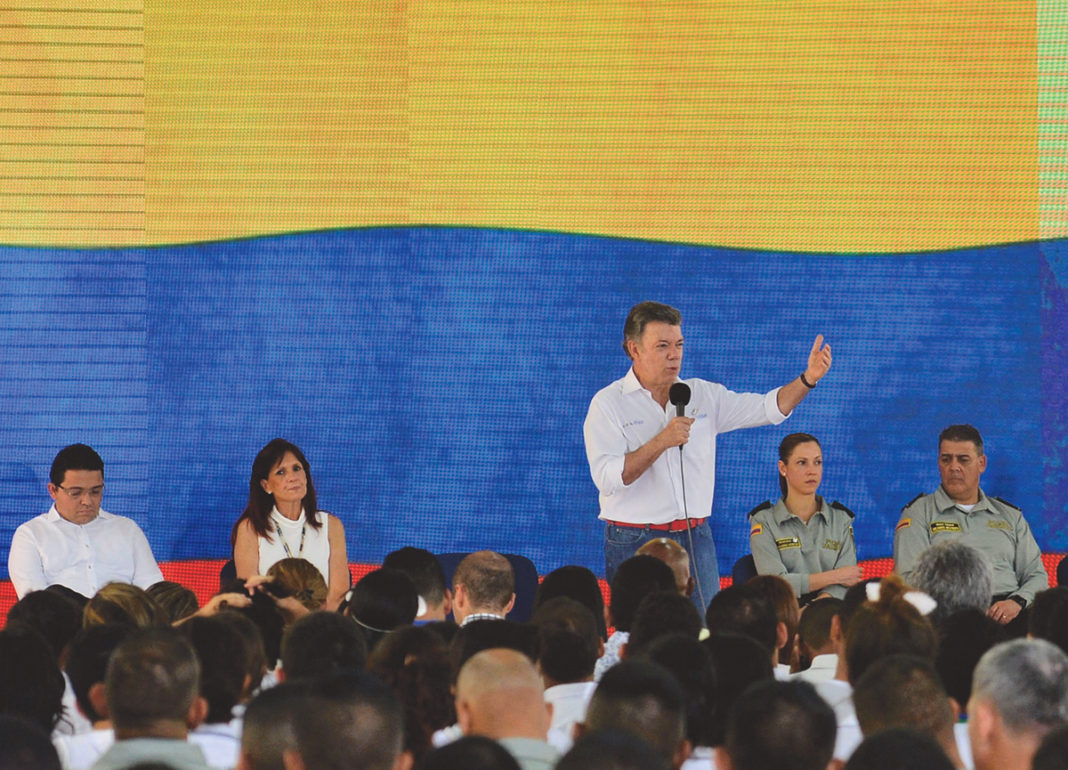 While the past four years have seen the dream of peace near reality in Colombia, financing the end of the conflict looks like a nightmare. Implementing the accord won’t come cheap — especially now that economic tides have turned.

The price of oil has fallen off a cliff since President Juan Manuel Santos began peace talks with the Revolutionary Armed Forces of Colombia (FARC) in September 2012, pushing the nation from an era of growth to an age of austerity. Colombia’s GDP grew by 6.6% in 2011 and expanded by at least 4.0% in each of the next three years. That rate dropped to 3.1% in 2015 and is expected to fall further, to around 2.5%, this year.

The stretched-thin national budget will now have a much harder time accommodating all the plans and programs negotiated in the earlier days of the peace process. “They were making promises that are going to be very hard to keep now without raising taxation enormously,” said Adam Isacson, the Washington Office on Latin America’s senior associate for regional security policy.

If raising taxes is the answer to pay for peace, the burden would have to fall on the wealthy class. The peso’s devaluation, ballooning inflation, and percentage of the lower-class population that works in the informal sectors of the economy mean that it will be difficult to get the needed revenue otherwise. “You’re not going to get it from poor and middle-class Colombians that are getting slammed right now,” said Isacson.

Whether through tax increases or other means, the government is now on the hook for many expensive post-conflict programs. There is a fund to compensate millions of victims, rural land reform, agricultural stimulus, coca substitution plans, landmine removal, drug-prevention measures, and a series of development initiatives to improve infrastructure, healthcare, education, food security, housing, and poverty.

How much will this all cost? The long answer is complicated, and the short answer is that nobody knows. Last fall, Colombian Finance Minister Mauricio Cárdenas offered up an estimate of US$30 billion. Global Risk Insights, an analyst group from the London School of Economics, has put the price tag at US$90 billion over the next decade. Another London-based group, Capital Economics, offered a range, with the high end coming somewhere in the middle.

“It’s difficult to pin down the exact cost precisely, as the full details of the deal are not yet known, but estimates range from $15 billion to as much as $45 billion U.S. dollars — or 5-15% of GDP,” said the firm in a July report. “This will be spread over a number of years, but it is still a substantial fiscal cost.”

Colombia has been earmarking post-conflict programs into its budget. In 2016, some US$3.4 billion was reserved for victims, those displaced by the war, and land restitution. The 2017 national budget proposal that Cárdenas sent to congress in late July included a slight increase, to around US$3.9 billion, in direct post- conflict funds. “But if the post-conflict requires additional resources, we will also have to generate additional income and we will have to find more in the budget,” warned Cárdenas.

Colombia Gets a Helping Hand

Colombia will have some help. Allies and international organizations have offered financial support, with the biggest sum — at least US$450 million — coming from the United States. “Just as the United States has been Colombia’s partner in a time of war, I indicated to President Santos we will be your partner in waging peace,” said President Barack Obama in February. Canada will throw US$57 million into the offering plate over the next five years, and the United Kingdom will contribute some £30 million. This includes some funds already supplied.

Global financial institutions are also onboard. The Development Bank of Latin America has issued a US$450 million loan for general development goals. The World Bank has created a “multi-donor” fund that will guarantee at least US$6,5 million. And the International Monetary Fund approved a US$11.5 billion line of credit in June. The intention of the IMF measure is to assure foreign investors rather than fund post-conflict programs. But given that the IMF more than doubled its previous US$5.4 billion limit, officials in Bogotá do now have a larger rainy day line of credit if they need some extra breathing room.

Peace Dividend and Other Means

Economic growth is also something the government is counting on. Last year, Cárdenas told Bloomberg that “a portion of the peace process pays for itself,” referring to the so-called peace dividend. This assumes nationwide economic growth will inevitably follow the end of the conflict, raising annual GDP by around 1%, according to the government.

Respected economists, including Ana María Ibáñez, the dean of economics at Los Andes University, have agreed that peace will add to growth. Few challenge the notion that there will be some benefits. But many remain skeptical that a peace accord with FARC will add as much as 1% to GDP in the near term. “That sounds optimistic to me,” said Isacson.

There is another avenue that could add vast sums to the government’s coffers. Colombia has been increasingly seizing the assets of drug dealers and criminals in recent years since a 2014 law — Código de Extinción de Dominio — expanded the state’s asset forfeiture powers. “They’re sitting on billions and billions of dollars of assets, but most of them can’t go to auction because they’re under litigation,” said Isacson.

A June report put the value of seizures from 2015 and 2016 alone at some US$2.8 billion, a huge jump over prior years. Actually seeing these funds, which Santos wants to put into the victims fund, will be difficult due to the legal proceedings and the difficulty of auctioning off the resorts, restaurants, cars, and other holdings for anything approaching normal market value. The specter of corruption, which has caused funds garnered from past seizures to go missing, adds to the pessimism that asset forfeitures can finance any post-conflict programs in the short term.