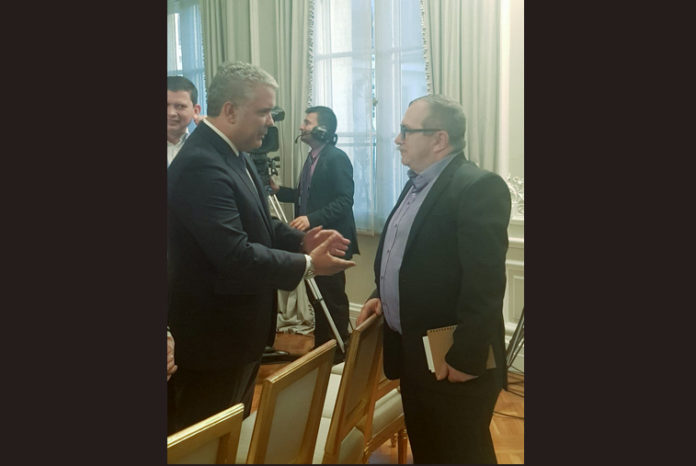 In an unprecedented statement to Caracol Radio hours after a video surfaced early Thursday morning in which four former commanders of the Revolutionary Armed Forces of Colombia (FARC) guerrilla announce their return to the armed insurgency, the group’s former chief commander Rodrigo Londoño – known by his nom du Guerre as “Timochenko” – called on all Colombians to support the Colombian Government and rally behind the Presidency of Iván Duque.

Londoño, who forged the Colombian peace process during four years in Havana, Cuba, and signed the Final Accord in 2016 with President Juan Manuel Santos, apologized in the name of FARC to his fellow citizens for the “shame” caused by the declarations of Iván Márquez, Romaña, Santrich and El Paisa – seen in the video dressed in camouflaged fatigues and carrying rifles. “War cannot be the destiny of this country. We will continue here, ready to give our all for peace and social justice,” remarked Timocenko on Twitter.

FARC’s former top commander assumed control of the Marxist organization in 2011 and reiterated that despite obstacles in the implementation of the Final Accord “ninety percent of former combatants remain committed to the peace process.”

The former political leader of the M-19 guerrilla, Antonio Navarro Wolff, also threw his support behind Timochenko, reminding the 60-year FARC leader that during their own peace agreement back in 1990, the “Colombian Government didn’t comply, to the point that they killed our leader Carlos Pizarro, but beside this, we did comply and history proved us right.”

President Juan Manuel Santos, who was awarded the Nobel Peace Prize in 2016 for ending more than a half-century of internal conflict with FARC also backed the words of his former rival Timochenko adding: “The dissidents must be repressed with all forcefulness. The battle for peace does not stop!”

The mayor and the mess