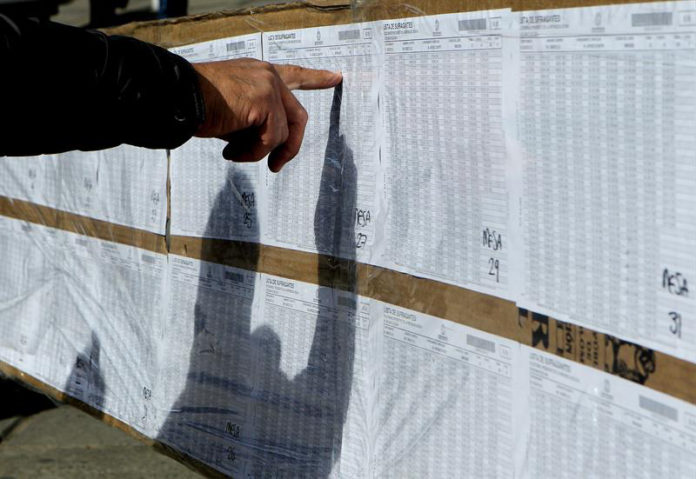 Thirty-six million Colombians who are eligible to vote will head to the ballot box on May 27, to elect their next president. In a race that began with eight official candidates on March 11, the number of candidates has been reduced to five. But, despite a narrowing playing field, Colombians, overall, remain deeply pessimistic and divided over the future of their country, most notably, the prospect of a lasting peace after a peace agreement was signed with the Revolutionary Armed Forces of Colombia (FARC) guerrilla.

In a survey conducted in April by Gallup, 70% of Colombians polled believe peace is now “on the wrong path,” and an even higher percentage (75%) are under the impression that the former Marxist rebels will not abide to the commitments set out in the Final Accord.

This widespread disenchantment has impacted the race to the presidency among the five candidates, from all sides of the political spectrum, committing themselves to a clean, open and non-violent campaign. Adhering to democratic principles and a depolarization of the political discourse has characterized this historic race, one in which all candidates have presented their platforms, and where they would lead Colombia if elected to the highest office in the country.

The 33rd president of Colombia will be one of five candidates: Iván Duque (Centro Democrático), Gustavo Petro (Colombia Humana), Germán Vargas Lleras (Cambio Radical), Sergio Fajardo (Coalición Colombia) and Humberto de la Calle (Liberal). These politicians, who have held diverse portfolios have publicly debated the future of the peace processes with FARC and ELN, state of the economy, future of the welfare system, health, education, infrastructure and trade, as well as how they will combat corruption and organized crime.

Even though polling data can be misleading or flat-out wrong – Colombia’s peace plebiscite, Brexit and Donald Trump’s upset victory are recent examples – trends do matter and are important. The poll released May 3 by the Centro Nacional de Consultoría (CNC) for CM& news confirms a clear advantage by the 41-year old Bogotá economist Iván Duque over the former mayor of Bogotá, 58-year old Gustavo Petro.

According to the CNC, Duque has 38% of voting intention, followed by Petro (25%), Fajardo (17%), Vargas Lleras (7%) and De La Calle (4%). This poll maintains Duque in the lead, and has widened the gap with Petro by 4 percentage points over a similar poll conducted two weeks earlier. However, should Duque not reach 50% of the votes plus one on May 27, he will go to a second round with his closest running mate on June 17.

There are two probable scenarios regarding alliances and outcomes after May 27.

In the first one: Duque wins with a decisive lead with 35%-40% of the vote, but not enough to clinch victory on the first round. Petro comes in second place with 25%-30% of the vote. If the centrist independent candidate Fajardo is in third place, his percentages could split down the middle, benefitting both Duque and Petro, thereby narrowing the divide and making the run-off a cliff hanger.

As the former mayor of Colombia’s second largest city, Medellín, and former governor of Antioquia, the 61-year old Fajardo could see much of his paisa base shift towards to the right, joining Duque, the official candidate of another Antioquia governor and ex president of Colombia, Álvaro Uribe Vélez. But, Fajardo also has shown to have consolidated an important following in Bogotá, and the capital, after three left-wing mayors, tends to lean more left, than right.

Germán Vargas Lleras is the “wild card” of these elections with a strong following in Bogotá, the coast and central regions (Valle, Risaralda, Caldas, Quindío). Vargas Lleras and Duque share similar professional backgrounds. Both have worked in the private sector and have close educational ties with the United States.

If Vargas, outsmarting the polls, manages to get double digits at the ballot (10%-15%), but not come in second place, his base could secure victory for Duque in the run-off.

The official Liberal candidate and former chief peace negotiator with FARC, 71-year old Humberto de La Calle is a statesman with outstanding public service credentials. As one of the architects of the peace accord and credited for having tirelessly worked alongside former adversaries during four years in Havana to reach a historic agreement, De La Calle’s appeal reaches across generational lines. But, as a politician with traditional liberal values, his votes, especially among the twenty and thirty somethings, who are sympathetic to the peace process, would shift towards Petro, a staunch defender of the agreement.

As a former guerrilla who joined the M-19 at age 17, Petro participated in violent acts against the state, until the group disarmed in 1990. Even though he joined the political mainstream, and held a seat in Congress for many terms, the populist leader has stayed the course with a hard left ideology and support of state control over economic and social models, including justifying the need of expropriation.

Another scenario that could also play out – defying polls – takes into consideration an important player in national elections: la costa. Vargas Lleras’ center-right Cambio Radical party has a very strong foothold in the departments that constitute Colombia’s coastal region (Magdalena, César, Bolívar, Sucre, Atlántico). As vice-President from 2014 to 2017, Vargas Lleras took it upon himself to modernize Colombia’s highway infra- structure as a major policy objective of the Santos government, and one that impacted the interconnectivity of the coast with the interior.

As mentioned, “wild card” Lleras could deflate Petro and Fajardo on May 27, clinching second place. A poll conducted in April by Cifras & Conceptos claims this forecast, and according to their data, in the first round, Duque would obtain a minimum of 37.2% of the vote and maximum of 37.7%.

If Duque and Vargas come out on top May 27, the hard left represented by Petro could retreat, and many of those voters would most likely abstain in the second round or cast a “voto en blanco” or protest vote, giving the upper hand to the winning candidate, as those votes will be added to the electoral threshold. Fajardo’s base once again splits down the middle, pushing Duque’s and Vargas Lleras’ points even higher.

After De la Calle announced last month that he would not join the Fajardo coalition, supporters of the experienced politician are more likely to join Vargas Lleras – albeit reluctantly – given the fact that both were part of Santos’ inner circle of trust, and Vargas has shifted his stance, claiming he would not modify the peace agreement with FARC.

Lleras’ recent peace backing has won him the support of President Santos’ La U party, strengthening his campaign. During presidential debates, Vargas Lleras has challenged Duque on peace, questioning why the right-wing candidate would want to “tear apart” that which was agreed upon in Havana.

Duque, on the other hand, has kept to his unwavering position on peace, threatening to extradite former FARC members engaged in drug-trafficking, and to submit the accord to a reform. As a supporter of the No movement in the 2016 plebiscite, Duque would also prevent those responsible for having committed serious crimes within FARC from reaching Congress, as scheduled July 20, when five senators and five house representatives are to take their seats as part of the accord with voice, but no vote. Duque says he will also modify the Special Jurisdiction for Peace (JEP) tribunals established to punish or pardon ex-combatants, which has been inundated with corruption scandals before it started to operate.

The Duque – Vargas Lleras model essentially gives centrist voters deciding power, as opposed to the traditional poll model outlined above in the first scenario. As Colombians decide next month what kind of nation they strive for, one in keeping with neo-Liberal values or a socialist one, the most important decision a citizen can do every four years is vote. All five candidates have assumed the great responsibility to take this country forward. But, as history has shown, major turning points for any nation are always unpredictable.