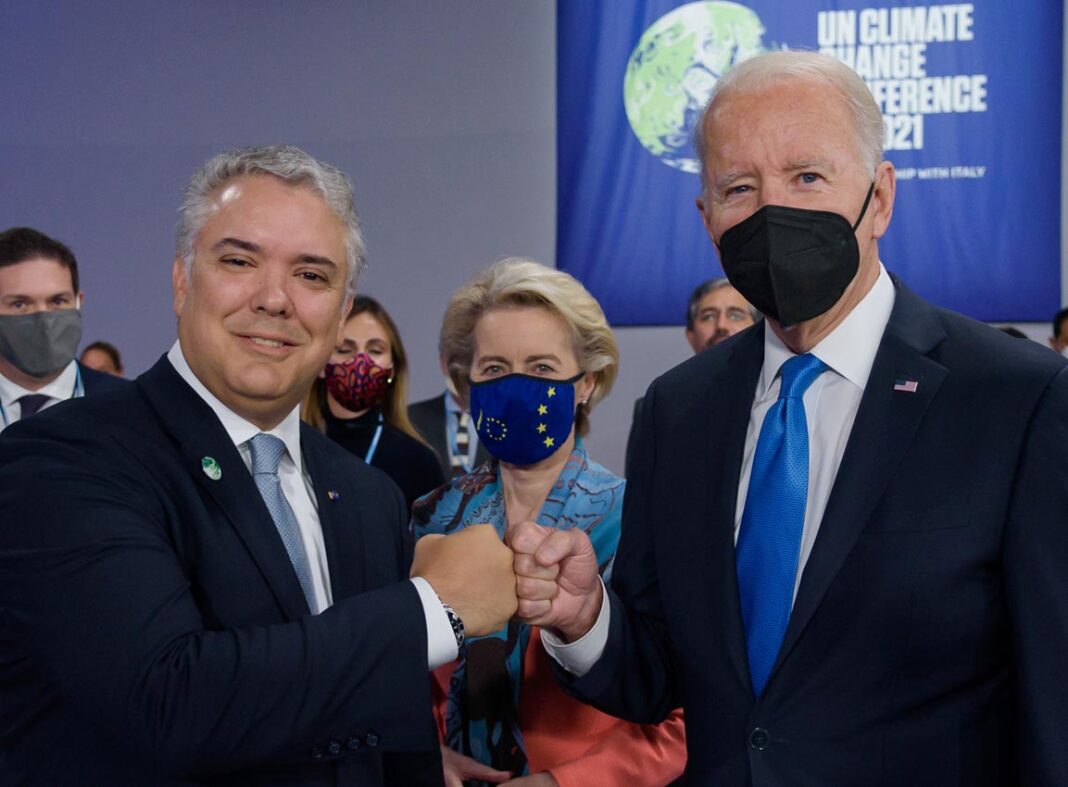 “Colombia is in the heart of President Biden,” remarked President Iván Duque on  Tuesday after a fist-to-fist encounter at the COP26 Climate Summit in Glasgow, Scotland. President Duque participated, along with President Joe Biden; President of the European Commission, Úrsula von der Leyen, and U.K Prime Minister Boris Johnson in the ‘Build Back Better World’ initiative, to address the development of sustainable infrastructure to fight climate change. “I want to highlight something, and I also want to say it with great gratitude: an expression of great affection towards Colombia; an expression that shows, not only that he loves our country, but also that for him, Colombia is a country that’s in his heart,” stated President Duque.

During his meeting with the US President, Duque personally thanked him for the donation of six million coronavirus doses and for considering Colombia as one of the leading nations for the implementation of an economic growth agenda and investment promotion policies.

President Duque pledged at the UN Summit that by 2022, 30% of the country’s territory and oceans would be declared “protected areas,” eight years ahead of a 2030 deadline. Duque also announced that by 2050, Colombia would be a carbon neutral nation. Both announcements have been hailed at the Summit as among the most ambitious  in Latin America. “With today’s unprecedented pledges, we will have a chance to end humanity’s long history as nature’s conqueror, and instead become its custodian,” remarked Boris Johnson. Commitments by over 100 leaders to reverse deforestation and land degradation by 2030 is a “significant breakthrough” highlighted the Prime Minister. Colombia is among the beneficiaries of £8.75 billion ($12bn) in public funding to protect and restore forests, alongside £5.3 billion ($7.2 billion) of private investment.

Colombia also endorsed along with Canada, Russia, Brazil, Indonesia and Democratic Republic of Congo the Glasgow Leaders’ Declaration on Forest and Land Use. Together, these nations contain 85% of the world’s forest reserves.