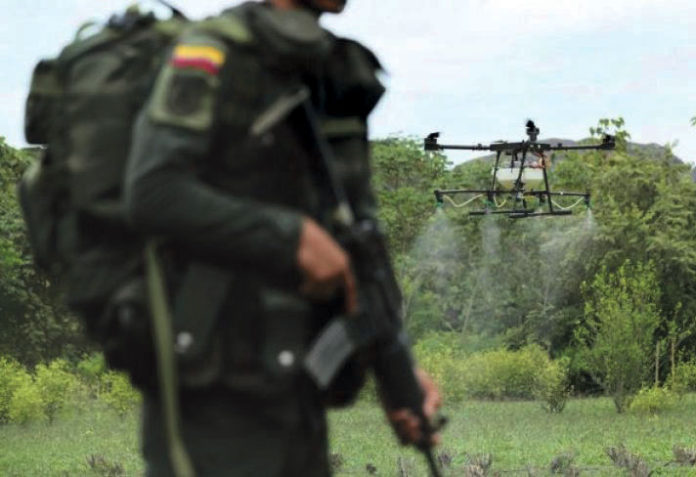 Two months before the end of his presidential term, Juan Manuel Santos appears to have extended an olive branch to the U.S Government after authorizing drones to fumigate large swathes of Colombia’s illegal coca harvest.

The announcement to use low-flying unmanned machines, armed with spray guns attached to herbicide canisters, comes at a time when the country is witnessing a spike in coca production, and after it received, in 2017, a stern warning from President Donald Trump, who said he would “not rule out” decertifying Colombia given the “extraordinary” growth in coca, unless it met eradication objectives for 2018.

According to a June World Drug Report by the United Nations Office on Drugs and Crime (UNODC), during the last three years, coca production in this country has tripled from some 48,000 hectares to more than 146,000 hectares. Colombia now accounts for 68% of the world’s total 213,000 hectares used to grow the plant to make cocaine. The UN report coincides with a statement on June 25 by the White House Office of National Drug Control Policy (ONDCP) that shows cocaine production in Colombia stood at 921 metric tons in 2017, up 19% from the previous year.

In 2015, President Santos took a landmark decision to suspend aerial fumigation with glyphosate after the World Health Organization (WHO) linked the herbicide to cancer. Produced by chemical manufacturer Monsanto, glyphosate also goes under the name RoundUp – an easily accessible weed killer sold in hardware stores across North America. However, data collected by the international health agency classifies glyphosate as a carcinogen with “sufficient evidence” it causes cancer in animals and “limited evidence” in humans.

Aerial spraying with crop dusters for almost two decades was a high-risk undertaking in Colombia resulting in many aircraft being impacted by bullets fired from the ground by members of the Revolutionary Armed Forces of Colombia (FARC) guerrilla. Treacherous Andean air currents, as well as fast-changing climate conditions often resulted in these U.S agricultural planes being grounded, or requiring military air support in order to prevent pilots from being injured or killed.

The suspension in 2015 coincided with the start of peace talks in Havana, Cuba, between the government and Marxist rebels. After the peace accord was signed with FARC in 2016, ending more than a half-century of conflict, Colombia’s coca harvest has boomed. Dissidents of former FARC and other illegal armed groups, namely Clan del Golfo, are fighting for control of coca-producing regions, as well as their lucrative drug routes.

Manually eradicating coca is costly and challenging for the country’s anti-narcotics police, requiring air and ground mobility to areas of the country where there is little or no infrastructure. They also face the constant threat of being attacked by drug traffickers. Plus, protests by coca farmers have resulted in violent clashes with the Colombian Army.

Even though low-flying drones require personnel on the ground, Colombia’s Ministry of Defense believes this fast-developing technology will be a new line in defense in the war on drugs. After a meeting at the National Narcotics Council, Santos said that drones “simulate ground, not aerial, fumigation” given their low-flying capacity and precision spraying. President-elect Duque also remarked during the campaign that he was open to spraying “with acceptable chemicals” in order to avoid legal crops from subsistence farmers being destroyed. Drones, said Duque “would give more confidence” to eradication efforts.

As a recipient of U.S$ 400 million every year in US-funded anti-narcotics aid, Washington is applying pressure to Colombia to reverse cocaine production or risk joining Venezuela and Bolivia as South America’s only decertified nations. According to the Ministry of Defense, seven drones will lead the new ground-to-air campaign with more to be implemented in the upcoming months.

Colombia’s drone debut in conflict regions may be raising eyebrows, but for Israel’s Defense Force, these machines have been tested and tried in combat, used to drop tear gas canisters onto Palestinian protesters in Gaza in order to prevent them from crossing the border. The terrorist group Hamas, declared enemy of the state of Israel, has also resorted to drones to invade their airspace and gather intelligence.

From the Middle East to Asia Pacific, drones are being widely used in military operations. Australia, responsible for 10% of the world’s water surface, plans on purchasing U.S$5 billion worth in drones to monitor the South China Sea. And, China has implemented a drone program dubbed “spy birds” to improve their surveillance network.

The announcement to use coca-fighting drones has also raised criticism from environmental groups claiming that spraying will kill insects key to pollination cycles of Colombia’s delicate tropical ecosystems, as well ascontaminatee streams that irrigate plantations where coca is grown. Many plantations intersperse coca plants with legal cash crops, such as plantain and corn in order to avoid being identified from the air by anti-narcotics police.

Time is a precious commodity in Colombia’s race to eradicate the coca harvest, and for the government, it is an urgent necessity if it plans to meet the objective of 50,000 hectares cleared by the end of 2018.

Drones may be an antidote to stave-off decertification in the short-term, but for retired general Rafael Colón, they could end up being some anecdote years from now. “The coca plant is killed by building roads that allow access to markets and rural development in areas where there has been little or no state presence,” he remarked on Twitter. “You can’t end coca with drones.”