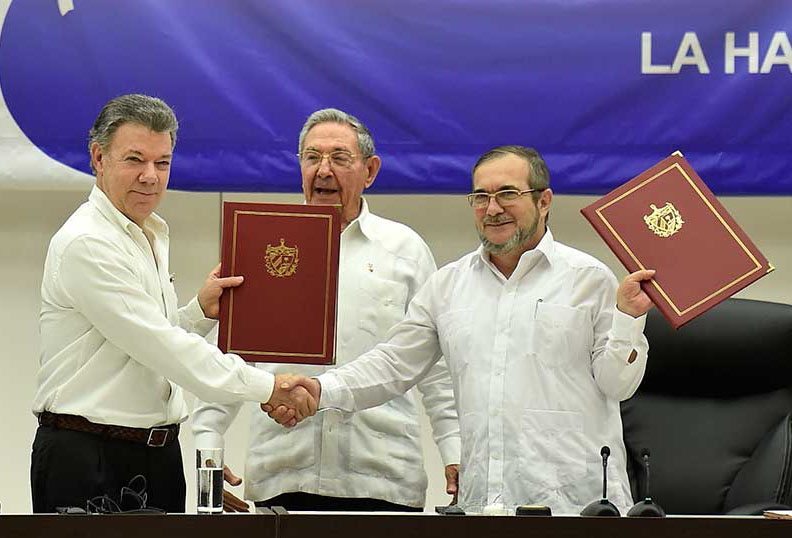 ”This is the peace of everyone, without exception. This is the peace we have been dreaming about.” With these words, Colombian President Juan Manuel Santos closed the ‘End of Conflict and Cessation of Hostilities’ ceremony at the Laguito Convention center in Havana, June 23 2016.

After four years in the making, with peace negotiating teams from FARC and the government inching their way through a six-point Agenda in Havana, Santos confirmed that the final accord will be signed in Colombia.

The June 23 agreement between FARC and the Colombian government ends 55 years of hostilities and offers the guerrilla organization all the state’s institutional guarantees to move beyond their belligerent and illegal status to become a political movement in their own right with the protection afforded other political movements.

Under the section ‘Bilateral ceasefire,’ FARC commits to abandon the use of all force, intimidation, use of weapons to exercise its political determination, work within the “values of the democratic system” and engage in a “free and civilized debate of ideas.”

The FARC also commit to a timeline of no more than 180 days to hand over all weapons to international observers assigned to the Office of the United Nation’s Secretary General.

In order to facilitate the concentration and demobilization of FARC, the government and guerrilla agreed on twenty-three “Transitory and Normalization Zones” plus eight camps, scattered across Colombia in rural areas, but all with access to rivers and roads to allow combatants to prepare for their re-integration into civil society.

FARC combatants will not be able to leave their “zone” in uniform nor with weapons. No civilians will be allowed into these zones and FARC will oversee that the  assigned “zones” of the peace agreement are being respected. The Colombian government will offer all the security guarantees to these ex-combatants, while they begin to adapt to a weapons-free life.

Should an incident present itself within the zone, requiring immediate help from the National Police or any other armed security force, the Verification and Monitoring Mechanism of the United Nations could authorize access according to the protocols in the final peace accord.

The United Nations plays a critical role in the implementation and verification of the final accord, which Santos has publicly stated he would like signed by July 20th. At the Havana ceremony, Secretary General Ban Ki-moon thanked both negotiating teams for their perseverance and dedication to peace. “In my final year as secretary general I am honored to be part of this historic process,” said Ban Ki-moon.


“The Colombian peace process validates the commitment of all the people in the world who work to end violent conflicts, not by means of the destruction of their adversary, but by a patient search of a conciliatory solution,” he concluded.

Cuba’s Raúl Castro did not spare words of praise either for the historic moment. “Peace will be a victory for Colombia, as well as for all America. The Community of Latin American and Caribbean States (Celac) would have reached a milestone in its short history by proclaiming the region as one in peace. The end of the Colombian conflict will be a new demonstration of the commitment of our peoples to shed the use of violence.”

As the representative of the host nation for the peace process, Castro looked beyond the confines of the region: “In a world disrupted by war and violence, the achievement of peace in Colombia represents a hope for millions of people on the planet whose main preoccupation is survival.”

Then it was ‘Timochenko”’s turn to address an audience which included six South American Presidents, including Venezuela’s Nicolás Maduro. The senior commander of FARC eulogized Maduro’s predecessor, Hugo Chavés Frias ” as an eternal commander….without whom none of this would have been possible,” he said.

In a 20 minute speech alias “Timochenko” covered plenty of terrain – from FARC’s early days in Marquetalia to more recent history of bloodshed and all-out-attacks against the state. “Neither FARC nor the state are vanquished forces,” claimed the commander.”Therefore no one can claim that what been agreed here is an imposition of one over the other.”

But he did reaffirm FARC’s original manifesto, set out in the first agrarian reform tracts of the group’s founding members, that: “Our essence is political.”

With a tone of suspicion – but all smiles – “Timochenko” appeased old adversaries, namely the retired Army Generals in the room, that from now on “we have to be allied forces for the good of Colombia, its infrastructure and natural resources.” He also claimed his movement would work within the Constitution to “protect our borders.”

But Santos had the final say as a world-at-large watched and listened. “I want a stable and enduring peace,  so the dark days of war with FARC never return.”

“What today signifies is nothing less than the end of FARC as an armed group. The time has come to be a country at peace and a country with hope.” 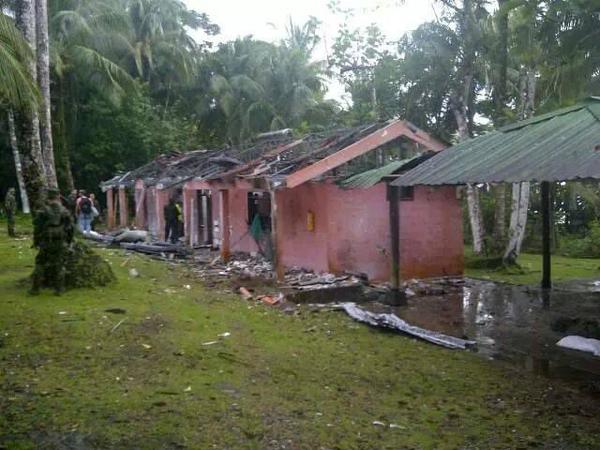