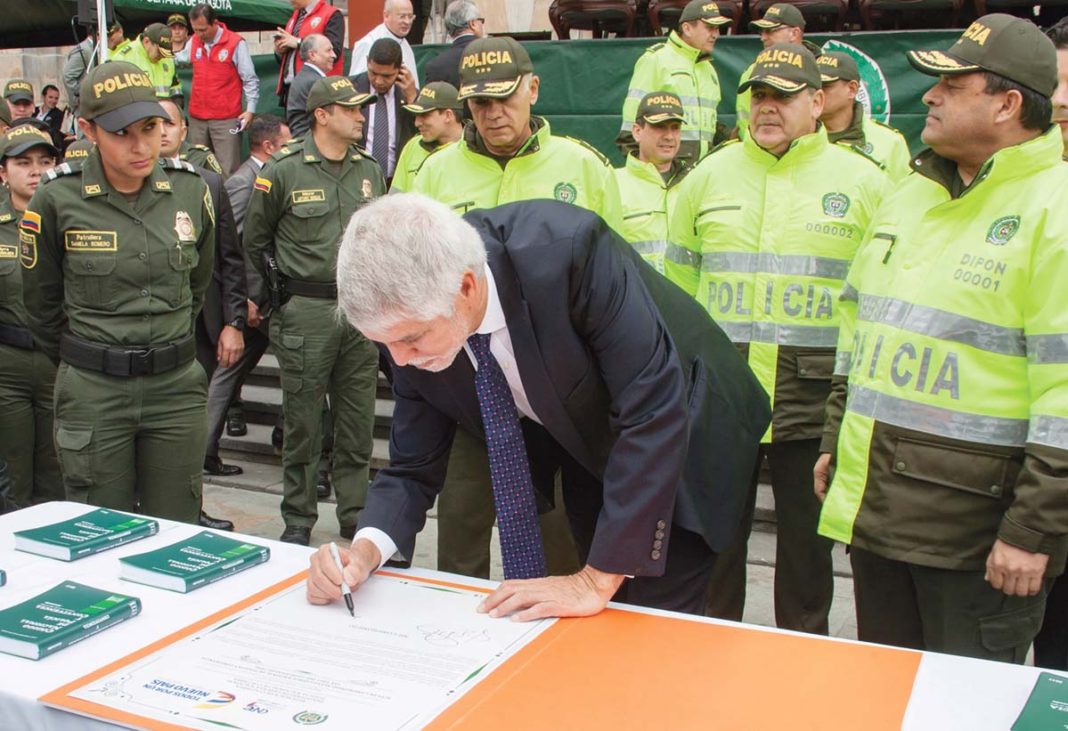 On January 30, Colombia implemented the New Code of Police and Coexistence aimed at enforcing low-level offenses and encouraging citizens to report small infractions. President Juan Manuel Santos characterized the changes as a modernization of the 1970 code that gives Colombian society an improved “manual for coexistence.”

To illustrate the nature of the changes, the government has cited focus areas including vandalism, noise ordinances, parking violations, improper trash disposal, and riders hopping the turnstile to cheat the bus system out of a fare. In all, new penalties for some 250 infractions are included in the new police code.

But while officials have highlighted provisions that could improve the quality of life for those in congested cities like Bogotá and Medellín, critics are concerned that giving more police powers to a force of some 180,000 officers will lead to abuse.

One amendment gives the police the right to enter a private residence without a warrant, for example. There are limitations. Officers may only enter in cases of emergency, such as a fire, flood, or a clear altercation taking place inside. But because the language is vague, detractors believe that over-reach is inevitable.

Sebastián Lalinde Ordóñez of the Bogotá-based human rights advocacy organization Dejusticia has criticized aspects of the new code that he believes could allow cops to legally violate citizen rights. “Many of its rules are problematic,” he wrote recently in a report. He added that, “a clear example is the searches that, with- out restrictions, become a weapon of discrimination by falling more frequently on certain profiles, such as black people and those from low social classes.”

Other language in the new code can be interpreted broadly as well, such as the right to fine anyone “disrespecting the rules of public spaces.” This stipulation is explicitly intended to safeguard areas around libraries, hospitals, museums, and cemeteries, “among others,” but it leaves a wide range of discretion for the cops.

Such concerns are exacerbated by the fact that trust is low for the national police force in many communities. On top of day-to-day reports of improper behavior or outright criminality, major scandals have deteriorated some people’s faith

in those sworn to uphold the law. One high-profile example came in May 2016 when some 1,400 officers were kicked off the force after being charged with everything from corruption to bribery to drug trafficking.

But changes were necessary, said President Santos, given that the police code has not had a major overhaul since the early 1970s. Some updates focus on societal concerns that either didn’t exist or were not among the primary concerns of the nation back then, including the distribution of stolen mobile phones.

“We had a code that had not been adjusted for more than 45 years,” said Santos in a national address, adding that “the new code is an important step to ensure a more peaceful, harmonious, and peaceful coexistence in our daily lives.”

In all, there are four new fine levels. The highest level of 786,000 pesos (US$270) is reserved for violations that include setting off illicit fireworks, distributing alcohol in schools, or defecating in public.

The new fine for playing loud music late at night will cost offenders about 390,000 pesos (US$135), and the same rate applies to performing sex acts in public. Being caught entering a city bus without paying or throwing trash in the street comes with a fine of 196,000 pesos (US$65). If the waste left in public is the result on not cleaning up after a dog, the violator must pay 105,000 pesos (US$35).

The new code is already being enforced widely. There were 47 related fines handed out in the Caribbean city of Barranquilla in the first 12 hours alone, according to local officials. In Bucaramanga, an eastern Colombia city of half a million people, law enforcement revealed at least 36 infractions in the first day, including a dozen for drinking in public.

And some of the other misdemeanors citizens should be aware of under this guide for “co-existence” are:

Carry ID at all times: The Código demands that all citizens must have their cédula with them at all times. Citizens stopped by the police without their ID will be considered as “obstructing police procedure.”

Owning “wild pets” forbidden: The code for owning an animal from the wild as a pet, involves the maximum Category Four: 786.880 pesos (US$270).

Keep Life Vests under the seat: Tampering or removing an aircraft life vest is considered a Category Four offense.

Cellphone caution: Buying, renting, or using a cell phone that has been reported as stolen is a Category Two fine.

Keep it clean: Dog owners must pick up after their pet or face the minimum Category One fine.

“It is a purely preventive code that seeks to create an environment of civic culture, peace, and coexistence,” said local police commander General Juan Libreros.

Over the next six months, the police force will focus on training its officers to fully understand these new enforcement concerns and the corresponding penalties. The country has also launched an education campaign for citizens. Various governmental websites now feature videos and digital pamphlets to fully explain the changes.

There is even an app for that, titled “Código de Policía Colombia,” available for free on the Google Play store for Android. It was created by two brothers with ties to the force, and offers a common-language breakdown of the new infractions and text from the new code itself.