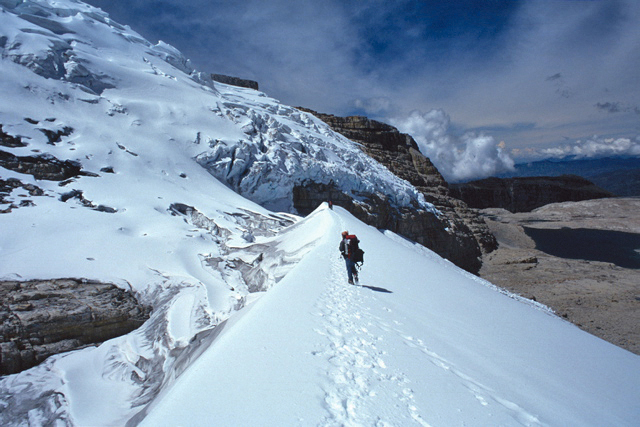 Climate change is taking a devastating toll on Colombia’s glaciers, according to the country’s Institute of Hydrology, Meteorology and Environmental Studies – IDEAM.

In a study released last month, within the next 30 years, the six remaining glaciers that cover the peaks of Colombia’s nevados will disappear if the ice continues to melt at current rates. According to the study, in 1850, the Sierra Nevada de Santa Marta was covered with 82 square-kilometers of snow, but in 2017, only 6,7 km remained. And in terms of the country’s sum total, during the last 150 years, Colombia’s glaciers have lost 90% of their ice mass, from 374 square kilometers to a paltry 37.

“Every glacier world-wide is facing this dilemma,” said Ómar Franco, director of IDEAM, during a press briefing. “It’s not just Colombian glaciers that are suffering.” The melting, he clarifies, cannot be attributed just to the rise in the world’s temperature, but also to the El Niño weather pattern that impacted the country between 2015 and 2016 causing severe drought. The physical and geographical characteristics of each glacier is also affected adversely with micro-climates, and the human footprint caused by unregulated tourism.

The IDEAM predicts that the ice caps belonging to four of the country’s stratosphere volcanos – Nevado del Ruíz, Tolima, Huila, and Santa Isabel – will disappear by 2050. The glacialpeaks of mountain ranges Sierra Nevada de Santa Marta and Nevado del Cocuy could have a longer lifespan given their distance from heavily populated areas, and absence of human activities, such as hiking that erodes fragile surfaces. According to the meteorological institute, the highest and most extensive glacier in the country – Sierra Nevada El Cocuy – will be the last to go.

Former Environment Minister Luis Gilberto Murillo also attended the briefing, remarking that Colombia has much to lose with global warming given its second-place ranking in the world in terms of biodiversity. “We call on countries that are big emitters of greenhouse gases to live up to their commitments,” said the minister.

While Colombia’s industrial sector contributes a mere 0,5% of global carbon emissions (China, the European Union, and the United States contribute more than 50%), the cost to our glaciers has been devastating, and unless the world’s leading economies cut their greenhouse gases within the next decade, the prospect of seeing snow-capped peaks in this country will soon be a thing of the past.

Working to tap a catastrophe at Colombia’s HidroItuango dam