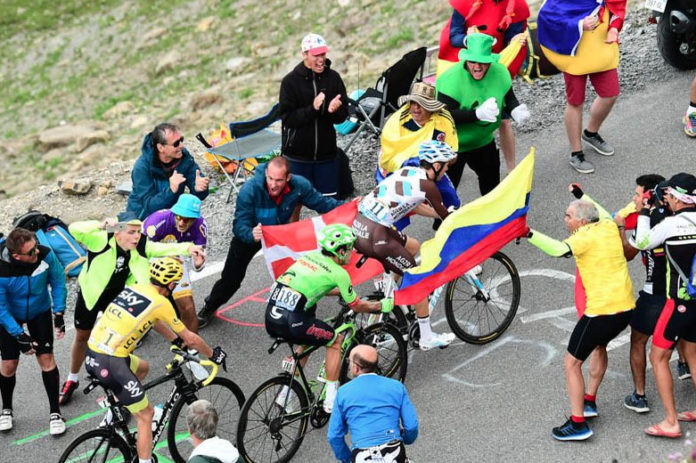 But on July 20, as Colombia celebrates its 207 years of Independence, the nation’s flag will be raised at the start of the 179.5 km race from Briançon in the Haute-Alpes to Col de Izoard.

With Britain’s Chris Froome of Sky wearing the leader’s yellow jersey, and Urán of the Cannondale team a close second in the standings, Thursday’s stage may be just what the Colombians are looking forward to in order to show the world they are the cycling kings of the mountain.

Colombians are passionate about cycling, and with many podiums to their name, from Giro d’Italia to Vuelta de España, this year’s Tour de France is being held during Colombia-France Year, celebrating the strong diplomatic, educational, cultural – and of course – athletic ties that exist between the two nations.

In an event with more colors than the traditional Tour yellow, before the stage kicks off in the alpine town of Briançon, Colombia’s Ambassador to France Federico Rengifo, and the general commissioners of Colombia-France 2017, Anne Louyot and Fabián Sanabria, will raise the tricolor flag. “As Colombian climbers [Urán and Quintana] persevere in the Tour de France, they carry the torch of hope,” said Sanabria. “The strength of their spirit reflects a whole people, the people of Colombia.”

With three Andean mountain ranges, Colombians have conquered the cycling world’s highest summits, ever since Martín “Cochise” Rodríguez immortalized a half-century ago a love of two wheels. Lucho Herrera and Fabio Parra opened the path that now lives on in Quintana, Urán and all Colombians dedicated to this endurance sport. In total, 76 Colombian cyclists have formed part of Tour de France history.

In the words of Christian Prudhomme, director of the legendary race, Thursday “will be the day of Colombia, and I am sure that the Colombians will do everything to win.”

Thursday’s stage culminates in a “fantastic lunar landscape,” said Prudhomme and a celebration of Colombian food and music will be held in Briançon, the high altitude town in the south-east of France, near to where Colombian cyclists Mauricio Soler and Santiago Botero won Tour stages in 2007 and 2000, respectively.

The Tour de France ends on the Champs Elysées in Paris on July 23, culminating 21 stages and 3,540 kilometers of French countryside.