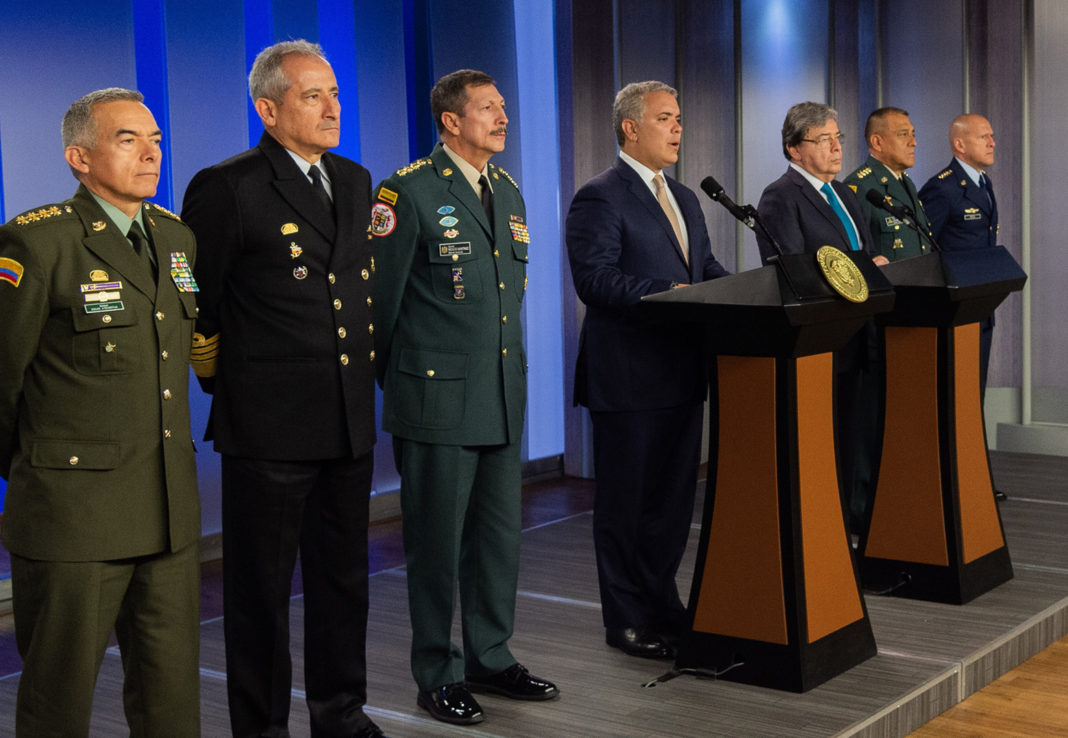 The government of President Iván Duque is enacting tough security measures to guarantee public safety during the nationwide strike on Thursday, November 21, including a decree that gives mayors and governors “extraordinary powers” to ban liquor sales, restrict the carrying of weapons, and declare a curfew.

With millions expected to take to the streets in protest over the government’s economic policies, Interior Minister Nancy Patricia Gutiérrez remarked to the media that all possible risks and outcomes of the Paro Nacional have been studied in high-level cabinet meetings. The decree, according to Gutiérrez, gives local and departmental authorities autonomy to call a curfew “when circumstances warrant,” coordinated with the Army and National Police. The country’s acting Attorney General, Fabio Espitia also referenced the strike, stating that the entity has “the power to prosecute criminal acts committed during the marches.” Recently-appointed Defense Minister, Carlos Holmes Trujillo, assured citizens that the government “will guarantee the right to peaceful protest,” yet confront acts of violence or vandalism.

The date of the strike, trending on social media as #21N, #ParoNacional21N, was set early in November by trade unionists, student organizations, state educators, opposition parties and groups representing indigenous communities opposed to the economic reforms of the Duque government. With rolling mass demonstrations by students protesting corruption in public universities, the Paro Nacional gained momentum with a Congressional inquest into the aerial bombardment on August 29 of a FARC dissident camp that resulted in the deaths of 11 combatants and 8 children.

The alleged cover-up of the deaths involving minors illegally recruited by the dissidents forced the resignation of the Defense Minister Guillermo Botero last month. The deaths of 188 human rights activists, community leaders and demobilized FARC combatants since the implementation of the post-conflict in 2017 has also fanned criticism of the Duque administration by left-wing parties and movements. President Duque has emphatically condemned the deaths of civilian activists, attributing these crimes to FARC dissident groups financed by drug traffickers.

Colombia’s Armed Forces have been placed on high alert for Thursday’s strike with 8,000 soldiers deployed to Bogotá, Medellín, Cali, Barranquilla, Cartagena, Bucaramanga, Pereira and Pasto. The Army will give additional support to Medellín’s Metropolitan Police in protecting the installations of the overland Metro and other transportation infrastructure.

Iván Duque faces the most serious threat to his presidency since taking office 15 months ago with 21N, amidst a political climate exacerbated by polarization, populism and regional instability. With mass protests witnessed on the streets of Quito, La Paz and Santiago, the Colombian government will close all its overland border crossings as of midnight Tuesday to prevent foreigners from infiltrating the marches. The country’s immigration entity Migración Colombia has expelled 25 Venezuelans for allegedly orchestrating violent acts and instigating migrants to protest. Colombia has received an estimated 1.4 million migrants since 2017, and openly condemns the dictatorship of Nicolás Maduro.

On Tuesday afternoon various student organizations and trade unions promoting the protest denounced on social media that state security forces were conducting raids in their offices and homes. Among the companies that were searched is the popular cultural magazine Cartel Urbano. News sources confirmed that 27 raids were conducted by the National Police on Thursday.

Many Embassies in Bogotá are advising their foreign nationals to stay home on Thursday and Friday, and companies are instructing their employees to do the same.

Here is a breakdown of what to expect on Thursday and some recommendations:

The marches in Bogotá will concentrate as of 9 a.m in the following locations before heading to Plaza de Bolívar.

The vehicle license plate restriction – Pico y Placa – remains in effect on Thursday and driving is not recommended, unless absolutely essential.

As the Air Traffic Controllers Union is participating in the strike and plan to block the Avenida El Dorado, expect cancellations and long-delays at airports. If heading to the airport, give yourself plenty of extra time, even if it means adding two or more hours to your normal travel schedule. If possible, check-in to a hotel close to the airport on Wednesday evening.

It may be wise to stock up on some essential household items, canned foods, bottled water, candles and batteries for flashlights.

Authorities recommend all persons participating in the march to carry ID at all times.