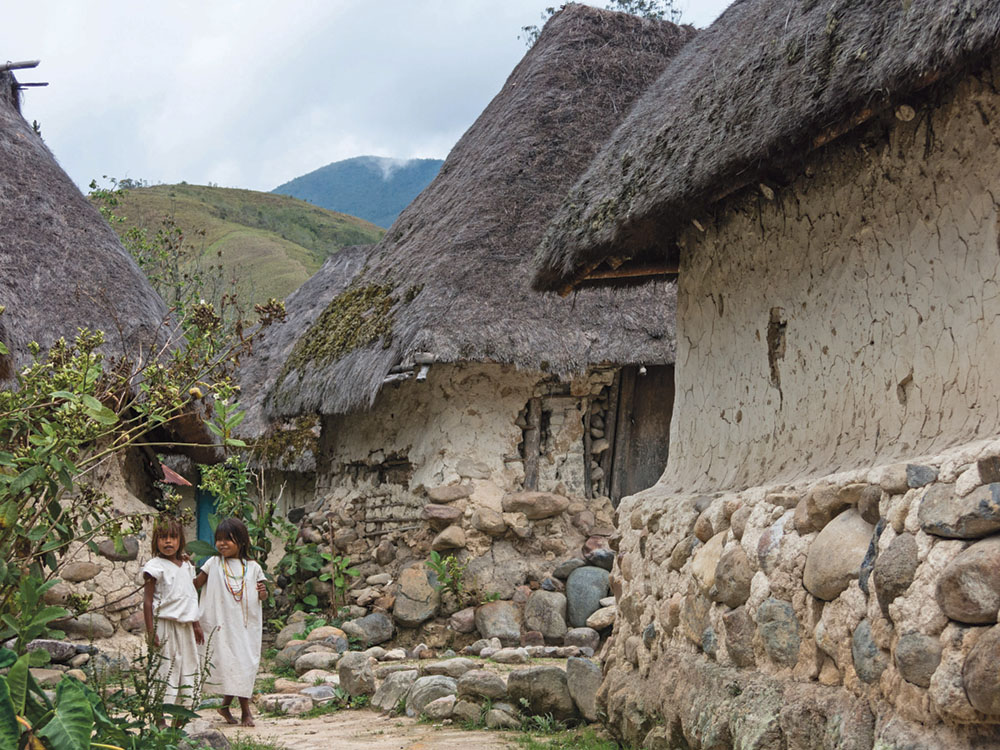 The Arhuaco indigenous peoples of the Sierra Nevada de Santa Marta are known for their century-long track record of environmental protection, but their cultural survival and conservation of this sacred mountain’s ecosystems are at risk. A new initiative that looks to preserve biodiversity and replant forests under indigenous control could help turn the tide.

President Juan Manuel Santos announced last month that the Forest Wardens’ “Heart of the World” program, entitles the Arhuaco to 500 hectares (1,253 acres) to safeguard a region that has come under threat from a myriad of problems such as extreme climate change, illegal coca harvesting, deforestation and the impact of mass tourism in the Tayrona National Park. “We now have peace, but it forces us to act on another front,” said Santos during a visit in February to Nabusímake, an Arhuaco community in the foothills of the Sierra. “We have to embrace nature and reconcile with her”.

Four indigenous populations inhabit the Sierra Nevada: Kogui, Kankuamo, Wiwa and Arhuaco. With more than 22,000 members, the Arhuaco are the largest group, but their existence has been under constant threat. Arhuaco territories have been traversed by all the parties in Colombia’s 52-year long internal conflict and used as drug trafficking routes. Illicit crops were grown on deforested areas by illegal armed groups. A major aim of the Forest Wardens program is to diminish human pressure on regional biodiversity and stop the surge of large-scale farming threatening fresh water sources.

The coastal mountain range of the Sierra Nevada was declared a Biosphere Reserve and World Heritage Site in 1979 by UNESCO, supplying water to 18 municipalities. At least 70% of environmentally-sensitive zones under the program are destined for natural regeneration of ecosystems and about 30% can be used for the development of food sovereignty programs and productive projects. Indigenous peoples often need a smaller percentage of land for sustenance, according to Colombia’s Ministry of Environment.

There have been two other programs with the same objective in recent years: to buy lands for indigenous peoples with the aim of installing them as protectors. Between 2007 and 2010 the Environmental Program of the Sierra Nevada de Santa Marta constructed 10 cultural villages in the ancestral territory of the four indigenous groups. It was supported by the government that purchased the land around the ten villages creating the cordon ambiental (environmental “cord”) of the Sierra Nevada.

The villages were constructed to “satisfy social necessities of health, education, electricity and drinkable water,” said Jorge Carpio, a representative of the environmental authority of the César department. A total of 10,732 hectares (26,519 acres) were bought by 2013.

Later, and before the apparent suspension of the Environmental Program of the Sierra Nevada, indigenous authorities secured inclusion of the Forest Wardens’ “Heart of the World” program in the National Development Plan 2014 to 2018, making it official public policy. It was within this framework that the Arhuaco were awarded during the president’s visit to the Sierra in February, the right to buy back 500 hectares at their “Heart of the World.”

According to Hermes Torres, an Arhuaco leader and secretary of the general counsel of the Arhuaco resguardo, it is just one more step towards “regaining control over ancestral lands.” Resguardos are collective indigenous territories where the Arhuaco exercise socio-political authority. The Arhuaco ultimately plan to pursue control over a total area of more than 190,000 hectares (almost half a million acres).

But they face a legion of challenges. Colombia is highly susceptible to climate change and the Sierra Nevada mountain range where the Arhuaco reside, faces isolated threats from extreme drought, logging and a surge in illegal mining operations.

Indigenous groups in the area calculate that there are 395 mining and energy titles that have awarded to companies, some of which are grouped together to amount to one project, while others are still waiting for licenses to operate in the Sierra Nevada. Those projects conflict with the resguardos.

Carpio noted that you can see problems just by consulting different maps. “You observe overlapping requests for mining titles with the indigenous Arhuaco resguardos and with a nature reserve of civil society,” he said.

The Sierra Nevada of Santa Marta is one of the most important ecological areas of Colombia and a surge in extractive and agro-industrial projects along the coast have begun to deplete natural resources, by diverting rivers to irrigate plantations of African wax palm and bananas.

The Forest Wardens program is an initiative that tries to counter man-made influences that harm the environment and enables the local experts of nature preservation — the traditional inhabitants — to fulfill their role as caretakers.

Guillermo Torres of the conservation and sustainable development foundation Pro-Sierra claims that a multi-temporal analysis from satellite images and vast fieldwork used to calibrate these images reveal that 83% of the Sierra Nevada’s forests have been affected by human activity. According to this researcher, the impact is worse near areas where humans have settled, and mainly results from deforestation, forest fires and the expansion of agricultural and cattle frontiers.

Environmental threats such as these are taken very personally by the Arhuaco. They describe themselves as global custodians of the world who bear the responsibility for the well being of the mountain.

“That is the thought, the philosophy, our knowledge – the commitment that man has with nature,” said Hermes Torres. “We are a part of this great natural world. We are the caretakers and keepers of the medium we live in. Therefore there is a spiritual and material commitment.”

About the author: Bram Ebus is a freelance journalist based in Colombia. A longer version of this story appears on Mongabay.com