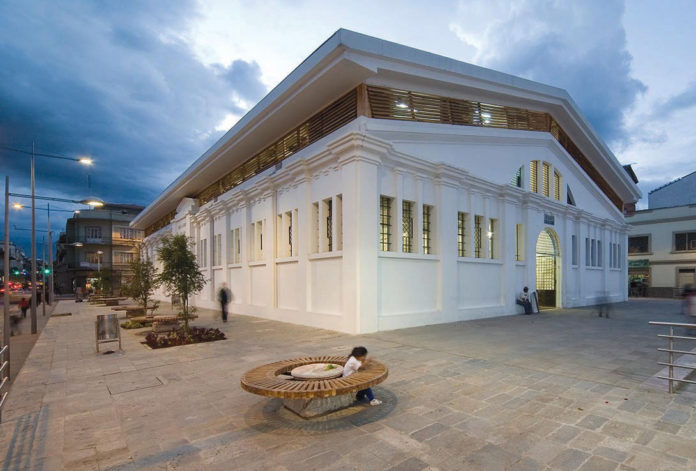 After deliberating for several months, on October 27, the 2016 Rogelio Salmona Latin American Architecture Prize was announced in the main auditorium of the Virgilio Barco Library in Bogotá. Four jury members, divided among four regional zones (Brazil, Southern Cone, Andean, Mexico/Central America and Caribbean), analyzed 62 architectural nominations from all over Latin America for the best contemporary projects that met the criteria of the award’s theme: “Open Spaces / Collective Spaces.” By August, a selection of 20 works were nominated to move forward to the second cycle of the competition and finally, on an October evening, the Ecuadorian architect Boris Albornoz was announced as this year’s big winner with his rehabilitation of the Mercado 9 de Octubre building and the Plaza Rotary project in Cuenca, Ecuador.

In the main auditorium of the power- fully monumental library designed by the prize’s namesake and Bogotá’s revered architect, Rogelio Salmona, the ceremony opened with presentations honoring Salmona’s legacy and influence on Latin American architecture, and recaptured the events of the past few months as the 20 notable works were selected for the competition’s second cycle back in Au- gust. The jurors were distinguished figures in both Latin American and International architecture circles: Ana María Duran Calisto (Andean Region), Ruth Verde Zein (Brazilian Region), Fernando Diez (Southern Cone Region) and Louise Noelle Gras (Mexico, Central America and Caribbean Region). As the jurors took the stage, the foundation announced the five honorable mentions, two of which were projects located in Medellín: the Explora Park from the architect Alejandro Echeverri Restrepo, and the Bethlehem Park Library from Hiroshi Naito. Finally, an applause rang out as Boris Albornoz was proclaimed the winner, and the architect received his award.

Albornoz has been an active architect and urban planner in Ecuador for more than twenty years, and is actively committed to developing a strong future for architecture and urbanism throughout South America. He is the recipient of numerous first prizes and honorable mentions in his home country and has served on the faculty of the University of Cuenca.

Albornoz’s winning project was the 2009 rehabilitation of a crumbling and unsanitary market bazaar in the center of the beautifully historic and UNESCO listed city. The original market building was constructed in the early 1930s to serve as the central point of local commerce and food sales. The new project maintains the old building’s structure and its site for its original purpose and adheres to the same simplistic, whitewashed, neo-Republican aesthetic style of the original design. Albornoz’s new revitalized market building expands to three floors (from the original one floor) by adding an underground level and by extending the roof for a third balcony-style level as an open air atrium unifies the building though its central core. These open air balcony-style floors combined with the modern interior renovations and light fixtures to create a much more socially engaging environment for the purpose of commerce and business conditions, and has established a much improved level of hygiene and security for the market, the Rotary Plaza and the surrounding neighborhood.

This prestigious award and the ceremony was organized by the Rogelio Salmona Foundation, an organization committed to preserving the works and thoughts of Colombia’s great architect, and strives to continue his legacy and ideals of architecture and urbanism in today’s contemporary society. The aim of this year’s award themed as “Open Spaces /Collective Spaces,” was to recognize projects that properly utilized their surroundings to create an inclusive and collective urban environment. Albornoz’s revitalization of the Cuenca market is a perfect example of these aims as it breathed new life into an existing site to transform an urban context and preserve the existing heritage of the city’s commercial center.