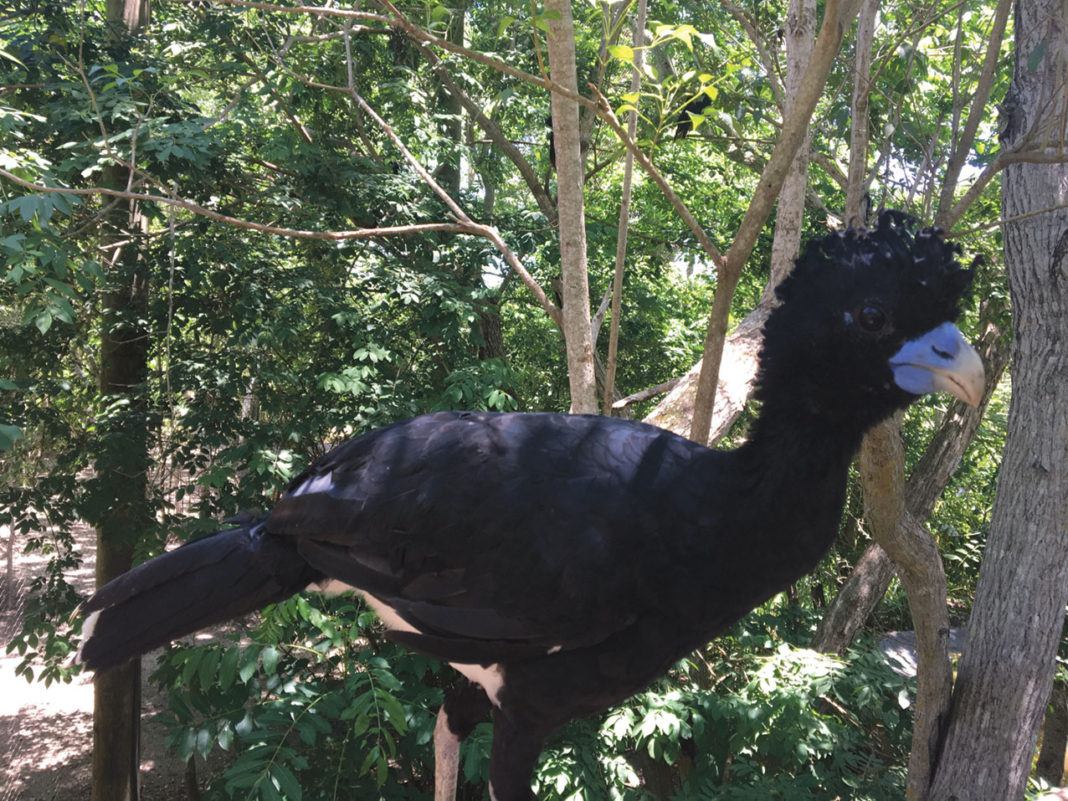 So “new and beautiful” was the Blue-billed Curassow that when English zoologist Louis Fraser described this bird for science in 1850, he named it Crax alberti, after Queen Victoria’s “illustrious consort, His Royal Highness Prince Albert”.

Less than 200 years later, this regal bird may be reaching the end of its reign. It lives only in Colombia and is one of the world’s most critically endangered species – just 150-700 remain. Paradoxically, many of these birds may owe their survival to violence – and could find a new enemy in peace. Their fate is tied to Colombia’s like never before.

The Blue-billed Curassow is a secretive bird that skulks in dark corners of moist forests, foraging for insects and fallen fruit. The males are black, with white bellies, the females are black above, ruddy-brown below. Both have a punky crest of curled-up feathers.

Folktales say curassows got those quiffs when they stole fire from the jaguar and gave it to humanity. As the curassows carried a burning log on their backs, the flames burnt their crest feathers into crisp curls. If there’s any truth in that story, the birds might have torched their own future prospects in aiding humanity.

Roads, mining, logging, and ranching – as well as illicit coca and marijuana production – have devoured nearly 90 percent of Crax alberti habitat. Back in 1965, researchers reported that the species was “becoming very rare” and just one year after the Revolutionary Armed Forces of Colombia (FARC) guerrilla formed. The origins of what would become a half-century long conflict began to buy the Blue-billed Curassow valuable time.

The internal conflict waged between FARC and the Colombian government claimed 270,000 lives and displaced seven million people. Out of this darkness, though, did shine one ray of light: violence protected large portions of the natural wealth that will be key to Colombia’s conservation future.

“Armed conflict is good for preventing deforestation,” says Pablo Negret, a doctoral researcher at the University of Queensland, Australia. He has shown that there has been consistently less deforestation in areas of Colombia with more fighting.

Negret warns of risks to Colombia’s natural heritage as people return to rural areas from which they had fled, and as mining and agriculture expand into forests previously off-limits because of the fighting. These areas include the Sierra Nevada de Santa Marta and the Serranía de San Lucas, two mountain ranges that are among Crax alberti’s last refuges.

There are fears that after having survived half a century of war, the species cannot cling on for much longer. But, Christian Olaciregui, Head of Biology and Conservation at the Barranquilla Botanical and Zoological Foundation, is determined to make sure Crax alberti’s extinction is not one of the prices Colombia pays for peace. With colleagues, he is developing a national action plan to save the species.

Olaciregui says the Blue-billed Curassow should benefit from the creation, planned for 2018, of a new national park in the Serranía de San Lucas. But he is also eyeing other sites in northern Colombia, where captive-born birds may soon roam. If these sites have the right resources and if the local communities support conservation, the next challenge will be raising birds to release.

Colombian zoos house just 27 Blue-billed Curassows, and Olaciregui says most of the females are old and only one male is actively breeding. “We still have to work a lot on breeding,” he says. But, that work passed an important milestone when, in 2014, Colombia’s National Aviary became the country’s first institution to breed Crax alberti in captivity. Now, three years old, the nine offspring should be ready to reproduce soon.

With this boost to the captive breeding program, Olaciregui hopes reintroduction could begin in three to five years. It will be a critical period for Crax alberti as Colombia manages the return of displaced people to rural areas and works towards its goal of ending the loss of its natural forests by 2030.

Under the peace deal, former FARC guerrillas will retrain as forest guardians or may find other jobs in conservation, perhaps playing new roles in the story of Crax alberti. There is also huge potential for a birdwatching boom to foster a lucrative eco-tourism industry in post-conflict areas.

“Crax alberti’s rarity and the fact it is found nowhere else on Earth mean it is highly-valued by birdwatchers,” says lead author Natalia Ocampo-Peñuela. “Many would go to great lengths to see this bird. Its presence would definitely spark the creation of birding lodges and jobs for guides.”

The bird’s beauty has long drawn admirers. Generations before hunters gathered the birds that bred in Colombia’s National Aviary, two wild-caught Blue-billed Curassows ended up in England, in the private zoo of the 13th Lord Derby. It was these birds that the collection’s curator, Louis Fraser, described when he named the species Crax alberti.

Within a year, Lord Derby had died and his animals were put up for auction. They included 70 passenger pigeons, a species that went extinct in 1914, and four Carolina parakeets, which went extinct four years later.

If Crax alberti avoids joining them on the list of lost birds, it will be because Colombia has found a way to balance economic development with conservation. The Blue-billed Curassow has a second chance to bring light into people’s lives. This time it might avoid getting burned.

About the author: Mike Shanahan is a freelance writer, and author of Gods, Wasps and Stranglers: The Secret History and Redemptive Future of Fig Trees. He blogs at Under the Banyan.

The search for little Toro in the Sierra Nevada