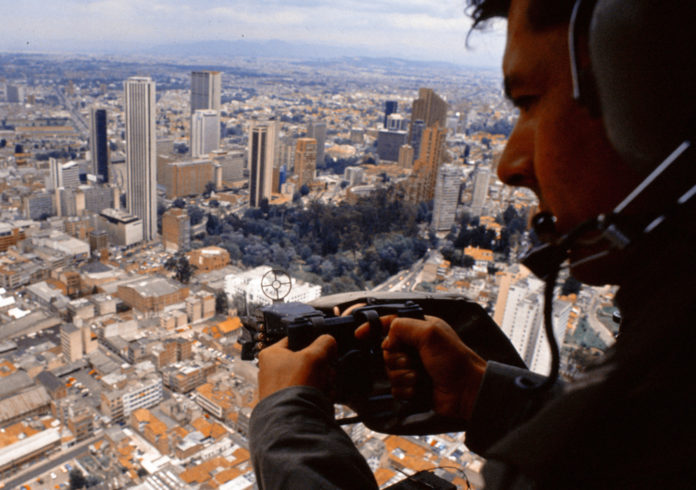 “News is what a chap who doesn’t care much about anything wants to read.” – Scoop, Evelyn Waugh

(Excerpt from Jimmy Weiskopf’s upcoming blockbuster, My Part in the Narco-War)

Alittle late, I rushed up the grand stairway of the Palacio de San Carlos and found a seat at the long tables which squared the ornate, paneled salon opposite to that of Noemi: no-over familiarity intended, because she was the nation’s sweetheart among politicians just then: a pretty blonde with the good dress sense, oodles of charm and brittle assurance of a career woman.

After a gourmet breakfast served by black-tied waiters who treated me with an over-polite disdain, she rose, but was interrupted by a Mexican journalist in a Khrushchev suit, who asked her about the murder, the day before, of a girl of three, thrown down the stairwell of a police station a mere ten blocks from our palace of delight.

Sincere as it was, Noemi’s outrage didn’t explain why governance was a sick joke in Colombia, but that was just the start of a hanging judge’s summation of slain presidential candidates, a dynamited passenger plane, bombings, massacres, etc.

The Mexican’s joy in disruption for its own sake became ever more apparent as he leapt from one charge to the next without giving her time to reply or sneered at her hesitation, sensing she was too polite to either ignore or shut him up.

Finally, she proved worthy of the Queen she later presented her credentials to.

“Madame Chancellor, isn’t it obvious that Colombia has surrendered to the narcotics-traffickers?”

Its force lay in the icing of voice and smile, expressive of the false incredulousness the British upper class humiliates you with, as I’d learnt to my cost at Cambridge.

But when others asked the same questions with due courtesy, the cheapness of the victory was revealed. The “Extraditables” threat to terrorize the whole country if anyone touched a hair of the head of Escobar. The raid on a seminary which five hundred cops dis- mantled over three days without finding the fugitive. The enlistment of gangsters as bad in the manhunt.

A summons of such pomp was rare, and coming, as it did, in the midst of special ops the whole world was watching, her guests expected her to address the question. Any announce- ment – true or false – would have done so long as it resulted in copy. Instead, Noemi practiced the art of being nice. Look, she implied, isn’t being here, where the center holds, and with me, the stylish spokeswoman (plus mother and wife), a guarantee that we aren’t a failed State?

“Remember, the vast majority of Colombians are bravely coping with a threat which is unprecedented in the Western world”.

After a while, it was if all the questions were being read from a single index card: “Agreed, Mrs. Minister, but can you give us an indication of what the government is actually doing. Any- thing to counter the impression that you’re confused, divided and have neither the means nor the will to defeat the traffickers”.

Since everyone knew I’d never published anything on the narco-war, I’d been silent till then. Now, I decided that the impasse was a unique chance to show off to my colleagues. Speaking of my recent visit to the Lower Putumayo, where the guerrilla were practically in charge, I said it typified what was hap- pening in more and more rural regions. Why, then, did the government consistently ignore this threat, when it was as grave as that of the cartels?

When she smiled, I nearly blushed at the radiance cast upon me, such was its wattage, aided by her reassurance that it was a concern.

Thanks to her experience as a peace negotiator, Noemi was less fuzzy but still showed the traditional indifference of Bogotá-bound politicians to upsets in the distant frontiers. In her opinion, the FARC were a relic of an outdated agrarian-reform insurgency that was no longer a threat to an increasingly urbanized society. My colleagues likewise thought my question irrelevant, closed their notebooks and waited for the departure of a few to become the stampede that would excuse the rest.

Vindication soon came when the FARC launched a series of spectacularly successful assaults on military bases in the Putumayo which had little impact in the capital but did rightly alarm the multinational oil community, IMF, State Department and other interested parties as a sign of the armed forces’ inability to deal with an ever more protean violence.

In one way, it was dumb to expect the foreign press to acknowledge that the tactics of the narcos were neither new nor unique in a country that was barely emerging from the feudal warlord stage and the real story was not narco-terrorism but the proliferation of parallel States by gangsters in general.

I was also dumb for emphasizing the guerrilla, when the same logic should have favored the dominance of the paramilitary right (as it eventually did). It just happened to be the example I ran into at a time when the guerrilla were in the lead.

Yet, in another way, smart, for predicting that the morbid journalistic coverage of the country would shift, to a degree, from cocaine to kidnapping, counter-insurgency and a Switzerland- size no-go zone.

And, as it quickly transpired, super- smart to call attention to myself. Before the thing fizzled out altogether, Noemi decided to end it with the dispatch of the White House press room. She suddenly stood up, scanned the room for another question and when it didn’t come, released a last-minute bombshell.

“Who wants to become a Colombian citizen?”

It failed to detonate because no one was listening, much less interest- ed, except for he who’d been hassled by the migra* for fifteen years by then. It was one of those earthshaking moments when you can’t believe what you ́re hearing or that it’s your life that’s changed. “Me, me,” I shouted in a treble voice, frantically waving my arm at the teacher several times as I forced my way through the knot of people around her.

Instead of being startled, Noemi briskly beamed at me like an ambassador at a reception line. “Wise decision” she exclaimed, with a self-satisfied nod at the remnants of the press corps before ordering an aide to lead me to her office.

The Chancellery was gloomier than the Palace of Nariño and a lot less busy, but her office was sunny and bigger than that of the president himself. Noemi sat down at a desk like the deck of an aircraft carrier, scrawled down my particulars (“Mr. . . .? Weiskopf, of course!), and signed and handed the note to her aide, who instructed me to visit the naturalization department.

The next day, I assumed, in a Dickensian attic which turned out to be closed, due to a peculiar schedule of half-days that characterized the whole cumbersome procedure. But I was treated with courtesy through- out, the slow pace was vice-regal, not Kakfaesque, and success assured from the start, because I had accidentally found the palanca*, pulled from the very top, which is the only mechanism that works here. Though my citizenship took a year to become official, I was untouchable from then on, as the migra among other enemies knew.

*Literally, lever, i.e, the one that pulls strings.