Nimrod “Nimi” Molad, who started the popular burger bistro Agadón in 2006, is returning to his Israeli roots. Baita, which means “home” in Hebrew, is the result of cooking since a young age with his Jewish grandmother. But if the turquoise cushioned seats and brightly coloured tiles conjure up memories of Tel Aviv, the restaurant’s tall ceilings, washed-out brick walls and warm glow of exposed-filament bulbs just as easily transport a guest to New York, Berlin, or Buenos Aires.

While Colombia’s extensive Lebanese community offers Middle Eastern food across the country, Baita, which opened last February in the capital’s Zona G, focuses on the Mediterranean component of Israeli cuisine, especially seafood and vegetables. As a result, the eatery relies upon local farming partnerships for fresh ingredients, such as the large bowls of avocados and spices on display by the open-air kitchen.

The shrimp, which arrives from the Caribbean coast, is served in a metal basket with spicy mayonnaise sauce, and its lightly fried breading crumbles in one’s mouth. The eggplant-based dishes are perhaps the best on the menu. Slices of the vegetable are rolled around cubes of feta cheese and chopped tomatoes like a deep purple cigar leaf, alongside balsamic vinaigrette dotted with pine nuts.

The traditional staples are just as appetizing. To start, smiling waitresses bring out roasted garbanzo beans with rosemary. The hummus, drizzled in olive oil and whole chickpeas, is a thick and creamy compliment to wedges of warm pita bread. The crispy, bite-sized falafel balls can be dipped in sesame-based tahini sauce. To finish, Colombians are introduced to a dessert ubiquitous in Israel: malabi, or milk pudding with vanilla cream, hints of rose petal, and toasted almonds.

“Fingers were made before forks,” reads a sign along the restaurant’s interior. Indeed, Baita also makes a wide variety of sandwiches, ranging from chicken curry to chorizo to vegetarian. The slow-cooked beef, which is mixed with pesto, dried tomatoes, arugula, and browned onions atop slabs of ciabatta bread, is a lip-smackingly tender option.

To drink, unique mixes of juices and smoothies are available, including characters like the “Red Dragon”: strawberry, barberry, beet, pineapple, banana, ginger, and coconut milk. In addition, there is a broad selection of local and imported beers, which extends to several European ales that only arrived to Bogotá in recent months.

Baita could moreover moonlight as an art gallery. On one wall, a group of ten photographs reveal different urban scenes from around the world, with narrow streets, clotheslines and graffiti images of personalities like Alfred Hitchcock. On another, a Colombian sculptor has interconnected a set of painted vintage bike wheels into a cluster somewhat resembling the Olympic Games logo.

Seated on the outdoor patio, which overflows with chairs on sunny weekends, “Nimi” Molad speaks excitedly about the capital’s gastro-renaissance. When he first arrived a decade ago while backpacking through Latin America, it was a different era: “Bogotá had great restaurants, but you could count them on one hand. Now the industry is booming, with lots of new variety (…) In five years, it will be a different scene all over again”. 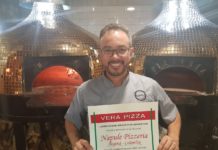 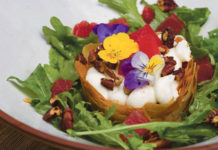 The woman from Belgrade