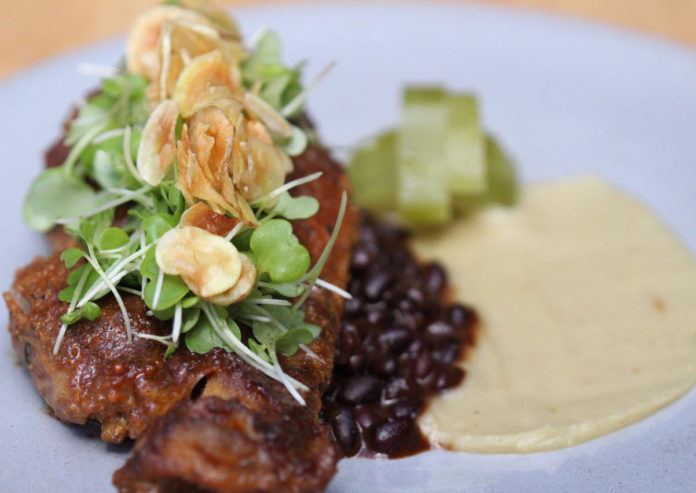 Alvaro Clavijo shrugs off the all too common refrain that in order to become a chef you need to spend time in grandma’s kitchen. “She couldn’t even fry an egg,” he remarks jokingly about growing up in a traditional Bogotá family where any mention of becoming a cook was akin to having no job at all. After a year studying architecture at Los Andes University, Álvaro headed to Paris, dabbled in photography, and washed plates in the underbelly of this culinary capital. He learned exceptional French, and despite his mother’s skepticism that he could make a living cooking, enrolled at Barcelona’s Hofmann School, known for creating future chefs to work in the academy’s own Michelin-starred restaurant, Hofmann.

After three years in the Catalan capital and a five spent living in France, Clavijo always kept the option of returning to Colombia open, especially as he had yet to convince his mother that all the years invested in Europe would eventually result in something most unexpected: a chef in the family. Mon Dieu! But stumping his return to Bogotá was New York, home to many culinary greats, including Thomas Keller of Per Se. Acclaimed for its fastidious attention to detail and haute French cuisine, Clavijo landed a job at Per Se, no longer relegated to washing plates, and learned that an immaculate kitchen is key to running a successful food establishment. “My cooking is French, my ingredients are Colombian, and my organization is American,” remarks Clavijo as we sit down in the main dining room of El Chato.

Even though El Chato opened its doors five months ago in what used to be a dilapidated house in Chapinero Alto, its reputation has been around for several years, when in 2013, Clavijo, wrapped up his time in hellish New York kitchens to start his first restaurant in Bogotá. The original location in Quinta Camacho was removed from the gastrosphere, even though his menu of mainly slow cooked meat dishes with his signature hyper elaborate technique swooned in clients, the opportunity presented itself to move El Chato to a more neighbourhood-friendly venue.

The ambience in this 80-seat establishment is a combination of the familiar and eclectic. Household items donated from friends – 1970s telephone, framed and faded high school photographs, a collection of medical encyclopedias – adorn wooden shelves on bare brick walls. The lighting is soothing on the eye and while the decór seems tongue-and-cheek, Clavijo’s easy to read one page menu is an introduction to one of the proprietor’s main objectives: dining out shouldn’t be taxing on the mind, but chance to offer exceptional dishes by combining years of training and technique.

To begin the El Chato experience, we order a round of house ‘mules’ with a direct reference to both a Moscow cocktail classic and Colombian icon of the countryside. The drinks are infused with sprigs of herbs and tropical fruits. Even though you can order any drink from the bar, the house selection sets the tone for an evening in which carefully chosen local ingredients work their way into a menu of exceptional dishes, each and every one prepared in the second floor kitchen by a team of cooks moving like monks on sacred turf.

The main dining room is abuzz with clients, proving that word is out with El Chato, and in a city where restaurants are more likely to fail than succeed, after our first round of starters, it is evident that Clavijo has star power, creating masterful dishes as part of a larger manifesto – be a restaurant in Bogotá worthy of international culinary recognition. In the immediate future, El Chato will no doubt make the prestigious San Pellegrino World’s Best Restaurants list, joining fifty others, including El Celler de Can Roca (Girona) and Osteria Francescana (Modena).

El Chato is an informal dining experience grounded in an unpretentious philosophy. The plates are reasonably priced – average $34,000 pesos – given the elaboration and quality in the ingredients that are chosen from very special horticulturists in the Sabana de Bogotá. A signature dish, the roast lamb was  – Boyacá meet Provence – tender and garnished with a creamy buttery sauce. Another plate, which deserves an article all to itself is the crab in an avocado purée garnished with mango, foraged greens and ground blackened rice chips.

Clavijo is not risk adverse, and likes to push the limits of heat and how temperature is key for masterful grill cooking. His meat cuts are also not the sort that are simply slapped on a grill, instead, they are cured in-house for weeks, letting alchemy work its magic.

Rarely leaving his kitchen, Álvaro elevates seemingly simple dishes to another level. So, whether you are out for lunch and want to try the house’s Cuban pulled pork or shrimp sandwich, or beef tartare garnished in rose vinagrette, mini croutons and a kale mayonnaise, dining out at El Chato is an encounter with fine gastronomy. In this Chapinero house, mountain meets sea, garden meets homestead. So bring on the inventiveness, for this restaurant is on par with the very best.

Colombian Easter: Size does matter when it comes to your fish