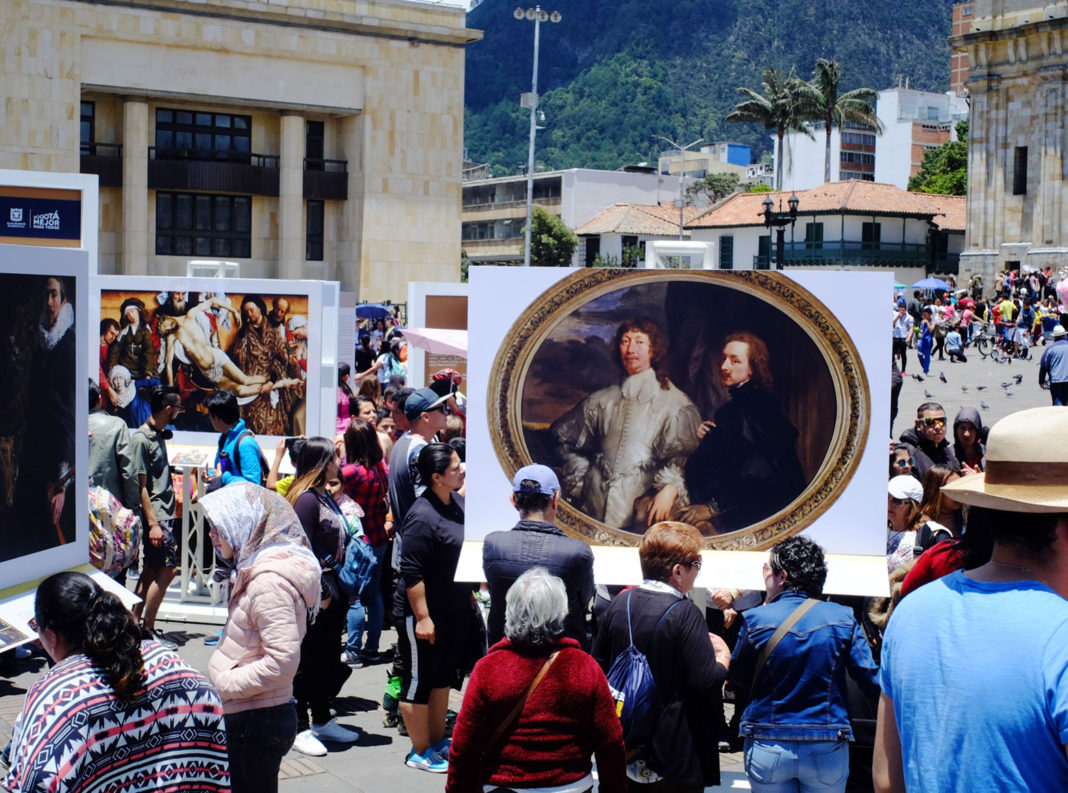 Bogotanos filled their historic central square, Plaza de Bolívar, during the opening weekend of El Prado in Bogotá, an exhibit in which 53 high-quality reproductions from the permanent collection of Spain’s El Prado Museum are on display, and a free cultural event sponsored by the Madrid-based museum, Bogotá Mayoralty and Spain’s Cultural Action entity (Acción Cultural Española – AC/E).

As part of the 18-month long cultural agenda FOCO España – Colombia, in which Spanish culture is the protagonist of many high-profile events, from film festivals to concerts, the real-size reproductions of the most recognized paintings of the Museo Nacional del Prado will be exhibited in the Plaza de Bolívar until September 24, before moving to the north of the city, Parque de la 93, until October 7. Among the works selected is Francisco de Zurbarán’s Agnus Dei, and the museum’s most-visited painting, Diego Velásquez’s Las Meninas. This exhibition marks the first time, Zurbarán’s Agnus Dei has been shown in Colombia.

Visitors will also enjoy the tableaux “Garden of Earthly Delights” by Hieronymus Bosch, as well as 25 pieces by Velázquez and Goya; 13 works by Italian masters Rafael, Caravaggio, Botticelli and Tintoretto; and the self-portrait of Dürer and “Judith at the banquet of Holofernes” by Rembrandt.

The paintings cover eight centuries of art, beginning at the 12 century until the 20th, giving visitors a comprehensive overview of the history of both Spanish and European art, and specific representations of religious themes, portraits of nobility and everyday life in each era.

“This exhibition is the closest thing to being in front of the paintings in the rooms of the Museum, delighting in the contemplation of the rich color, vibrant brushstrokes, the extraordinary play of light, or the fascinating faces that inhabit these paintings,” said Miguel Falomir, the director of Museo Nacional del Prado, on the eve of this visually enriching happening.