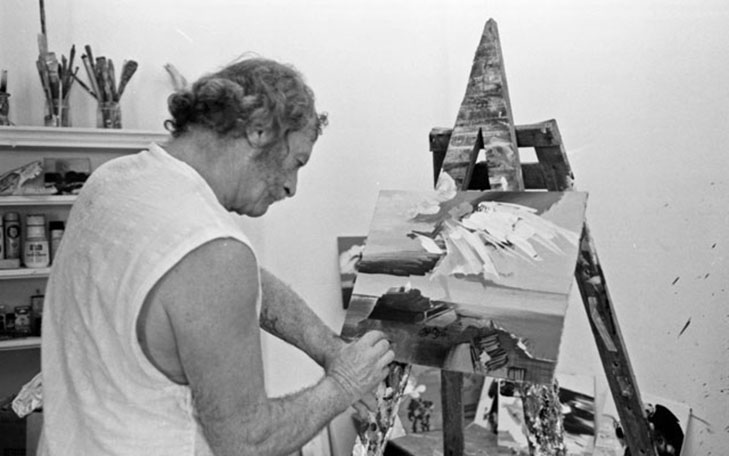 Alejandro Obregon (1920-1992) was the wild card of the Colombian art scene for most of the 20th Century, known for drunken brawls at his favorite Barranquilla watering hole La Cueva, where one evening, he fired-off a Winchester rifle encrusting the ceiling with metal. In another similar incident, Obregón fired at a recently completed self-portrait after two of his lovers saw themselves depicted in the same painting. The work ended up in the home of close friend Gabriel García Márquez. At one point in their lives, the Nobel Laureate and Obregón both lived in Cartagena, the former known for strolling the street, the other increasingly recluse.

To mark the centenary of Obregón’s birth Colombia’s cultural institutions are paying tribute to an artist who worked various mediums and drew inspiration from sea creatures, the Andean condor, and patriotic symbols. Among the many entities participating in the 100 years of Obregón is the cultural section of Banco de la República with a lecture series from Barranquilla’s Museum of Modern Art and venue that houses many of the artist’s works, from oil on canvas paintings to serigraphs. Titled “Alejandro Obregón and the artistic modernity of the Colombian Caribbean,” the conference looks at how Europe’s avant-garde movement influenced the literary and visual narrative of artists across Latin America, among them Obregón, who despite his staunch Spanish heritage embraced the tropical folklore and layered immigrant fabric of Barranquilla.

Like Barcelona, the Mediterranean city where he was born, Barranquilla was home to seafarers and colorful cast of characters, documented by the founding members of the Barranquilla Group – which included writers Alfonso Fuenmayor, Álvaro Cepeda Samudio, primitivist Noé León and photographer Nereo López. From this inner circle of literary patriarchs, the whiskey-infused gatherings expanded to include painter Enrique Grau and García Márquez.

Given physical and social distancing with quarantine, BanRep’s virtual event launches June 4 at 4:00 p.m with the conference hosted by art historian Isabel Cristina Ramírez, before embarking on a cycle that includes “Obregón and the Colombian context” by Sylvia Suárez; “Murals of Obregón in Barranquilla” by Néstor Martínez Celis; “The Seventies and the transition from oil to acrylic,” by Eduardo Serrano; “Landscape, flora and fauna in Obregón’s painting,” by Samuel Vásquez and “Obregón and violence” by Christian Padilla.

The conference will also showcase Se va el caimán, a mural-sized acrylic created for the Amira de la Rosa Theater in Barranquilla and which depicts a scene from the legend of the alligator man.  The work was created in 1982 in honor of the city and its majestic waterway, the Magdalena River, where, according to another legend, the artist would track caimans using his bare hands covered in paint.

To stream this live conference, as well as others, click on BanRep’s Webex event link: