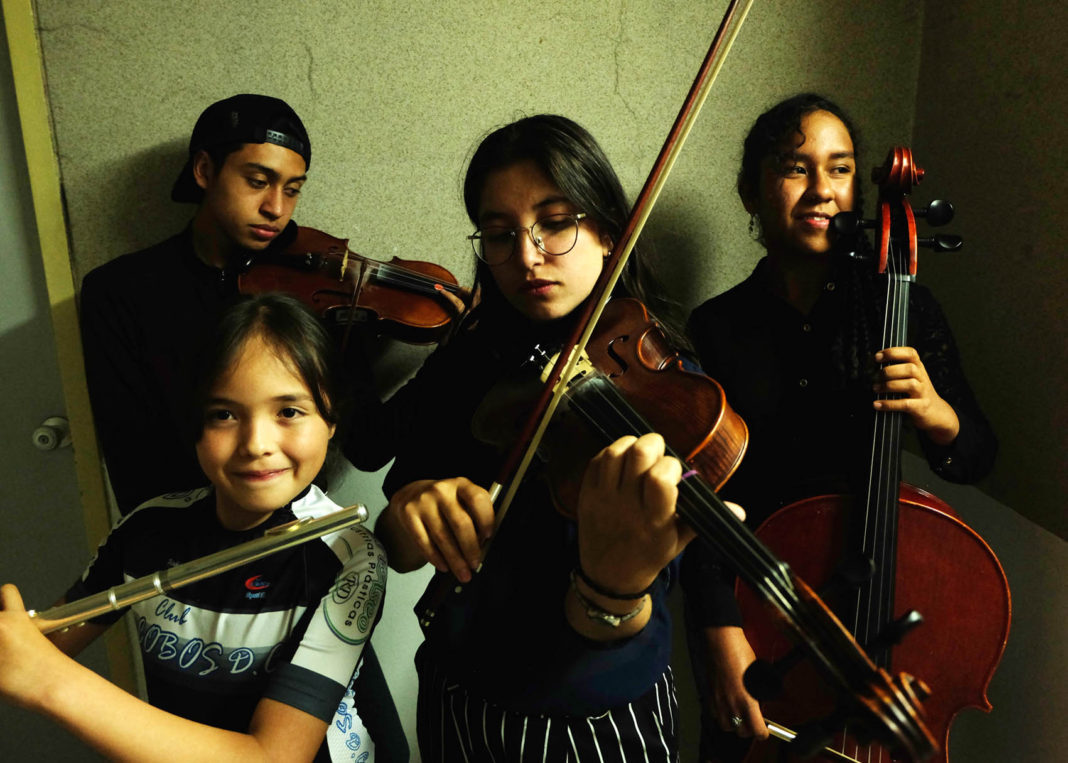 In 1991, children across Colombia were more likely to pick up a weapon than a musical instrument.

The same year that Pablo Escobar and the Medellín cartel were assassinating politicians, magistrates, journal- ists and anyone who stood in their way, President César Gaviria called for a Constituent Assembly to draw up a new charter of rights and freedoms for a nation besieged by violence. The new char- ter would legislate far-reaching reforms on indigenous rights, gender diversity, religious freedom, among many others, and known as La Constitución de 1991.

While the country’s youngest president at the time was drafting a Constitution with representatives from different political parties, including the recently demobilized M-19 guerrilla, First Lady Ana Milena Muñoz de Gaviria wanted to create an education model that would guarantee access to music for all children, regardless of where they lived, or if they had the means to purchase an instrument.

Looking no further than Venezue- la, and to the success of musician José Antonio Abreu in institutionalizing free classical music lessons to children in some of his country’s poorest areas under “El Sistema,” the belief that youth orchestras in Colombia could transform lives, joined the constitu- tional debate. When the new charter went into effect that same year, the right of children to have free access to music lessons became ensconced in the Constitution with a statewide program called Batuta (Spanish for “baton”.)

During almost three decades since Batuta was established, hundreds of thousands of youngsters have forged a strong bond with music, from learning the first instrument to joining a choir, or playing with an orchestra in front of audiences. While early childhood learning begins with coming into con- tact with sound, Batuta’s mission was as much about social cohesion as educat- ing the musicians of the future.

While the foundation depends largely on state funding through the Ministry of Culture, many corporations have backed Batuta’s mission to em- power youngsters through music, and a skill that champions values. Conjoined to the national curriculum, Batuta teaches students in a school-orchestra environment the importance of musi- cal heritage with classical instruments, as well as those from specific  regions.

“It’s an integrated approach to early childhood education that starts with in- fants ages two to six with Batuta Bebé,” remarks Parías. Students between six to 14 in age, enter the initiation stage with regular classes dedicated to reading the essentials of music played on Orff in- struments. From age 11 onwards, stu- dents are taught in symphonic music and become part of an orchestra. “It’s a musical roadmap for life,” states Parías. “It’s about teamwork, playing together to create excellence.”

From the foundation’s centrally- located offices in Bogotá, teachers, ex-Batuta musicians and psycholo- gists are connected to 47,000 students enrolled in a system that is recognized internationally for having protected children during the worst decades of this country’s half-century-long inter- nal conflict. “This is reverse cultural diplomacy. People come from devel- oped countries to study what we have achieved, and then try to implement this model,” says Parías.

While Abreu’s youth orchestras flourished with the objective to cre- ate world-class musicians, exemplified in conductor Gustavo Dudamel of the Los Angeles Symphony, for Parías, the Colombian version of El Sistema, may have been equally utopic, but “came face to face with war.”

This forced Batuta to implement within its methodology psychotherapy and counseling for children suffering from traumatic experiences associated with the conflict, from forced displace- ment to sexual violence. “Abreu’s vi- sion had to be adapted to the Colom- bian reality,” explains Parías.

From remote rural schools and com- munity centers in large cities where Bat- uta students rehearse, the reputation of belonging to an organization of social development also benefits families, instilling in parents a sense of pride that their child is an accomplished musician. “Music teaches children to resolve diffi- cult situations through dialogue,” states Parías of the almost non-existence of domestic violence when youngsters take up an instrument.

“In Colombia, the most dangerous time for youngsters is their free time, as it is when they are most vulnerable to being lured into gangs,” believes the cultural administrator.

At the Batuta Puente Aranda music center, some 60 youngsters are rehearsing for their upcoming perfor- mance in the Jorge Eliécer Gaitán the- atre. Instrument cases of every size lie open on the floor. Up a narrow stair- well, two young girls help each other with the scales of a flute, while in a dark corridor cellists tune their strings. The night is layered with melodies, some in unison, others repeating cadences above a raucous drum roll by teenage percussionists. Teacher Camila Bar- bosa of the National University’s con- servatory carefully listens to each and every note of music, stopping among the cramped metals stands with sheet music to help the youngest. After a mo- ment of silence, the orchestra breaks into joyous movement, punctuated by the brass section. The faces of the stu- dents are absorbed in concentration as they perform a cumbia and part of their repertoire with Puerto Candelaria, a Medellín band that melds jazzy tropi- cal rhythms with inspirational lyrics. Beyond a thick metal door, parents have gathered to hear this prelude to a Christmas concert.

Batuta’s magic transcends the score and busy schedules parents must adapt to in order for their children to learn an instrument. “It about being a fam- ily,” remarks 19-year old Erika Romero,

who began playing with Batuta at age six. “It has given me a sense of purpose to my life. Without Batuta I would have never decided to pursue music as a career. Fortunately, my parents sup- ported me from the moment I began to play violin.”

Valery Villalba is the mother of one of Batuta’s child musicians, Ivana Remarchuk, who wanders among bow- wielding, baseball cap teenagers, with a violin almost the size of her Min- nie Mouse hairband. For Valery, hav- ing Ivana in Batuta has “changed her life,” as the 4-year old is overly hyper- active, but when she listens to music, calms down.

For Parías, the word “family” comes up in almost every conversation when students refer to the experience of play- ing in Batuta.

While many small towns don’t have the physical space or financial resources to buy instruments, the ob- jective in the near future is to keep ex- panding the network to reach the most remote communities.

“This is a musical galaxy that keeps expanding, from its smallest expres- sions, in places where there are just a handful of instruments for children, to our municipal bands, and large or- chestras in every major city,” remarks Parías.

But, social cohesion isn’t just made in the barrio. As a way of integrating the rich and diverse sounds of Colombia, and for members from all 32 departments to share a common Batuta experience, the foundation organizes student exchanges.

These exchanges also define the sound Batuta orchestras have, as students master instruments that are part of an ethnic group’s cultural expres- sions, such as the chonto wood marimba; or, genre identified with a specific region, vallenato.

“Colombia is a musical nation at heart, and this has been recognized at the highest levels of an industry,” states Parías. “But, locally, it is embedded with the sense of territorial identity, and art form that most touches lives,” assures Parías. And after an evening listening to a young, exceptional orchestra play, it also touched mine. For harmony that originates in hope is universal, and transformative music is especially relevant this holiday season. 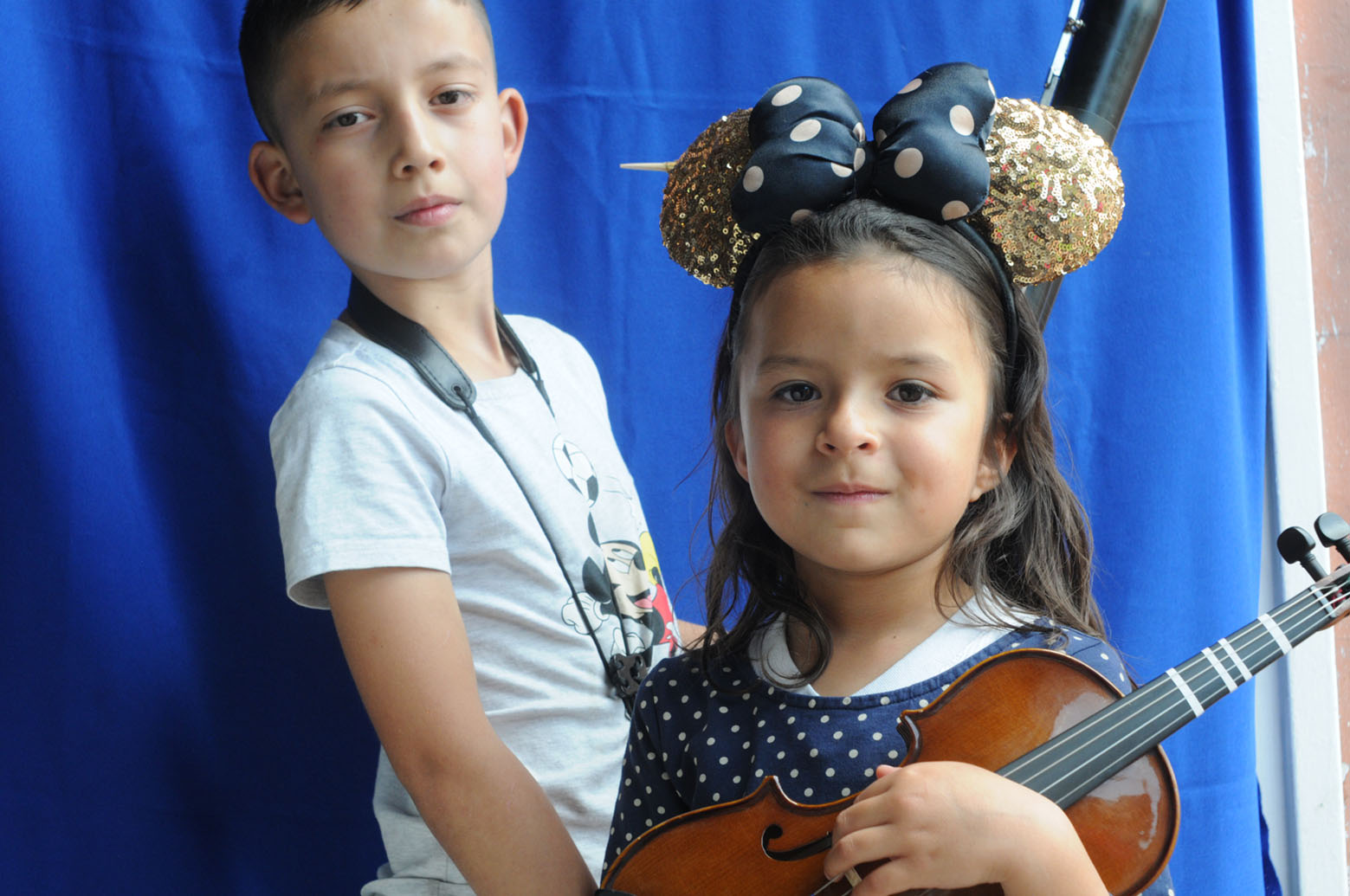