Text and photographs by: Sergio Bartlesman

A fisherman balances on a narrow plank overlooking a raging gorge, looking into the abyss, for the shadow of catfish. As the languid flow of the Caquetá River narrows through the Araracuara Canyon, a wall of water is formed, framing the hunter standing motionless with his net skirting the waves. The Araracuara Canyon lies at the Eastern limits of Caquetá, a department that was named after its longest river, which flows 2,300 kilometers from the high altitude wetlands of Nariño and Cauca to the Brazilian Amazon. Characterized by high limestone cliffs, the canyon at its widest point is a mere 40 meters, pushing the giant catfish downriver until spotted by the fishermen, some standing like sentinels between giant smooth boulders.

The men who every day risk their lives on precarious planks are members of the Huitoto indigenous group, trained since childhood as expert hunters, and who can navigate one of the country’s most inhospitable and treacherous terrains. With the first light of day, the fishermen leave their thatched malokas to reach the canyon’s edge, pushing through fields of razor-sharp grass, poisonous snakes and accompanied to the sounds of howler monkeys. In the faint blue sky, the mist rises from the rainforest and macaws dart among the canopy of green.

Known by the Huitoto as “Kings of the water world,” the giant catfish of the Amazon can grow up to two meters in length and weigh up to 150 kgs. They are natural predators of other river fish, and until the early 1990s they were caught with artisanal fishing techniques to be consumed by local tribes. When demand for the fish’s meat expanded beyond the Amazon to the country’s large cities, the population of giant catfish began to dwindle, making the daily work of fishermen even more dangerous, as the fish are spotted in whirlpools and the central currents of the Caquetá river. 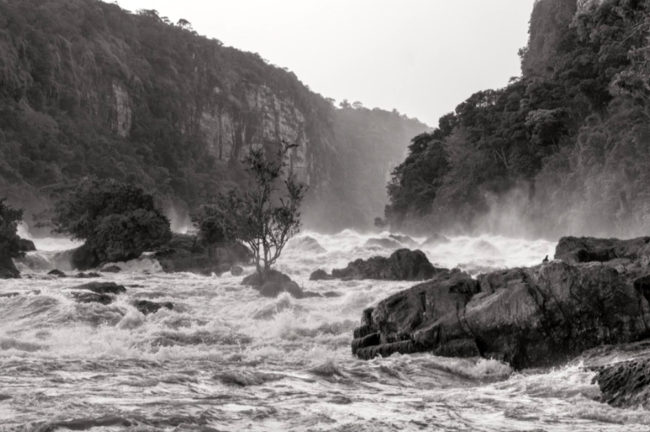 The excessive commercial exploitation by fisheries in Leticia, capital of Amazonas, as well as smaller scale operations along the Caquetá and Putumayo rivers, has resulted in the extinc- tion of many Amazonian fish species, including those considered bottom feeders. According to the Amazonian Science and Research Institute – SINCHI, at the end of the 1990s, 11,000 tons of fish were consumed every year, 40% of which were catfish. By 2011, these numbers fell below 7,000 tons, and more recently, experts put the number at 4,000.

The depletion of a main food source for the Huitoto threatens the survival of many remote communities scattered across the Caquetá, and a traditional livelihood deeply rooted in their sense of cultural identity. If the giant catfish of the Amazon becomes a creature of legend, so too, the brave fishermen of the Araracuara. Women of the swamps