Hacienda El Paraíso. After being away for six years while studying in a prestigious all boys school in Bogotá, Efraín, the protagonist of the novel María (1867), returns to his family’s home in the Valle del Cauca. “Before the sun set, I had already seen my parents’ house lit up on the flank of the mountain. When I approached it, my anxious gaze counted the clumps of willows and orange trees, pierced a little later, I saw, by the light from the lamps set out in its rooms”, says Efraín at the beginning of this classic Colombian novel written by Jorge Isaacs (Cali, 1837 – Ibagué, 1895).

With its literary associations adding to the appeal of its magnificent natural setting, the Hacienda Paraíso is worthy of its name: Paradise. Located forty kilometers northeast of Cali, it is the idyllic setting of this romantic novel and conserves, nearly intact, the architecture and the furnishing of the period. In fact, what most attracts visitors is knowing that it is “the hacienda of the novel María”.

As in many literary works, which are based on real life, the hacienda was in fact the property of Isaacs’ father, and Isaacs, like Efraín, also left the Valle del Cauca to study in Bogotá. A period piece set in literature and the rise of the Valle’s sugarcane industry, Paraiso, is the Colombian equivalent of Charles Dicken’s Bleak House in southern England or the Bronte sisters’ stone cottage in Haworth, Yorkshire.

One of the first details of the building which catches one’s attention are the fresh water irrigation channels which surround the house and are sourced by a stream which descends from the central cordillera, providing the Isaac’s home with cool ventilation and a deterrent to insects.

The rose bushes in the front garden described in the novel are still there, and its lush vegetation, panoramic view of the Valle del Cauca, romantic atmosphere and evocation of period customs add to its charm for both Colombian and foreign tourists.

The hacienda likewise conserves much of the original architectural layout described in the book, including the sitting room, dining room, bedrooms, study, chapel and kitchen, among others.

María Ángela Sinisterra, the woman who has been the guide at this museum/house for the past fifteen years, is another attraction. She recites passages from the novel by memory and recreates the melodrama of the novel for visitors: María, the heroine, is Efraín’s cousin and their love is doomed by convention, distance and finally, her tragically early death.

“Being able to get the book across to the public is part of my job. The visitors themselves ask for it. You tell them what the story is about, because many people have never heard of the novel, they only come because someone told them to visit such and such a museum,” she explains.“Some do know the novel, because they like to read or it was a set book in high school, but they never knew the house existed. For all that, you make them familiar with excerpts from the novel.”

Some Japanese readers were so fascinated by this romantic novel that in 1929, five families from Japan packed their bags and sailed to the port of Buenaventura, in the Valle del Cauca, to settle in the region its pages had idealized. There is a plaque, donated by the Japanese Embassy, which commemorates the pilgrimage: “On November 16, 1929, in search of the ‘Paradise’ described by Jorge Isaacs, the first group of Japanese immigrants, made up of 25 people belonging to five families, arrived at the port of Buenaventura.”

Nowadays, many Japanese descended from those first immigrants live in towns like Palmira and El Cerrito and the outskirts of Cali, the capital of Valle del Cauca.

“It is due to that book that there are many Japanese in the Valle. In fact, whenever a new Japanese consul arrives, one of his first duties is to visit the Hacienda El Paraíso,” Sinisterra notes. But the international fame of the hacienda does not stop there: it attracts visitors from many parts of Asia, Europe and the Americas. 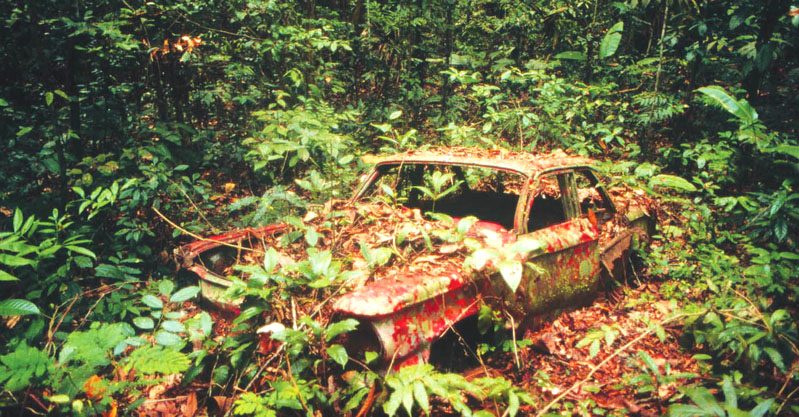 The lost Corvair of the Darien